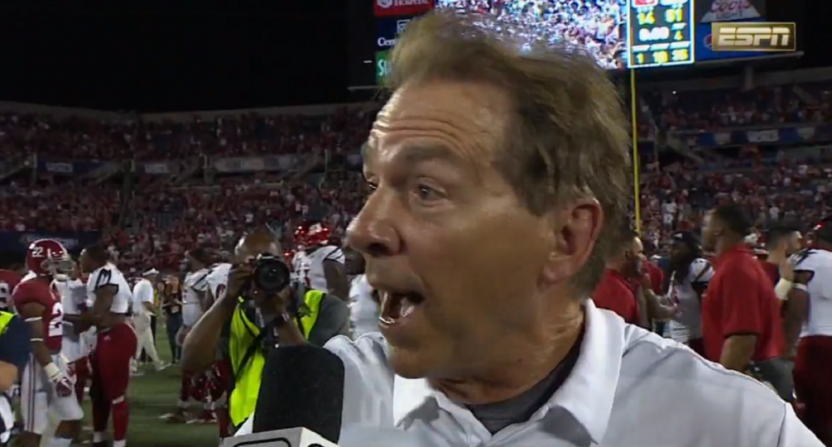 The No. 1 Alabama Crimson Tide cruised their way past Louisville on Saturday night, opening the 2018 season with a dominating 51-14 victory in Orlando. After deciding to go into the game giving both of his quarterbacks a chance to play and seeing one clearly have a bigger night, cranky Nick Saban made it perfectly clear he doesn’t want to talk about who will be Alabama’s quarterback moving forward.

Tua Tagovailoa completed 12-of-16 pass attempts for 227 yards and two touchdowns. The sophomore added 26 rushing yards and a rushing touchdown in the blowout. Meanwhile, Jalen Hurts completed 5-of-9 pass attempts for 70 yards and rushed for nine yards. Coaches will always have their trained eye on some details that may be overlooked by the common viewer, but it was clear which quarterback had the better game on Saturday night, and that was Tagovailoa.

After the game, Saban was interviewed on the field by ESPN’s Maria Taylor, with the first question being a pretty obvious one that Saban must have known was coming his way: What did he make of his quarterbacks in the game?

Saban provided a very Saban-esque response by getting chippy with Taylor right off the bat.

“I still like both guys. I think both guys are good players, I think both guys can help our team,” Saban said. He then quickly turned up the cranky factor to 11. “Alright, so why do you continue to try and get me to say something that doesn’t respect one of them? I’m not going to, so quit asking.”

Everything about Alabama’s QB situation has been classic Saban. When a season opens and Saban has to determine which quarterback he will go with, in the past he’s given playing time to multiple players in the first game. There was nothing different about that premise going into this season, except for the fact this year’s QBs were both on the team last year and played key roles in winning another national championship for Alabama. Hurts was the starter for an 11-1 team that won the Sugar Bowl semifinal against Clemson, and Tagovailoa is the young stud who stepped in after halftime to rally Alabama to a national title win against Georgia. This particular QB situation at Alabama has been more unique than previous QB battles, but Saban has stuck to his way of doing things to try avoiding a controversy.

Don’t mind me…Just doing my job. On to the next game. See you at @VT_Football at @FSUFootball

Saban has been around long enough to know how this works. Taylor was absolutely right to ask the question in her postgame interview on the field, whether Saban likes it or not. Could Saban have handled that one better? Absolutely, but this is just how Saban is. It likely was nothing personal against Taylor at all and more a built-up frustration with the media as a whole just wanting to know who’s going to play the most important position on the field for the defending national champions. Taylor handled it like a seasoned pro though, and moved on to the next question. Asked about what else Saban was focused on after a 51-14 win, Saban vented a little bit more for good measure.

Expect Saban to answer this question, however, soon when he decides Tagovailoa is going to be Alabama’s starting quarterback. Then he’ll find something else to get cranky about after 30+ point victories. He always does.