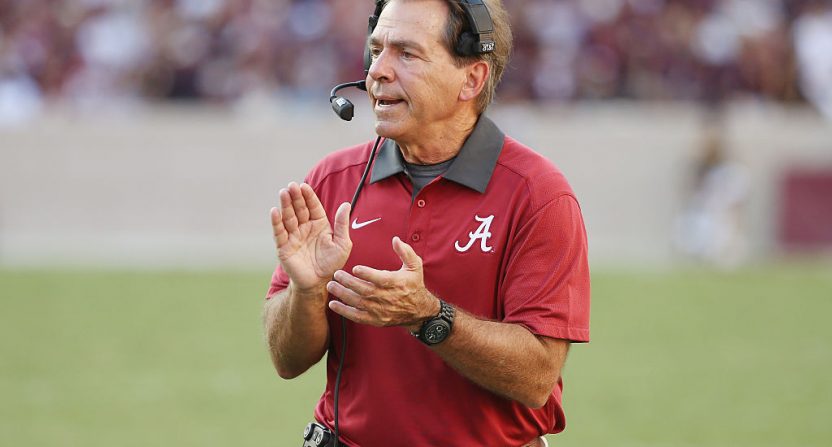 Alabama head coach Nick Saban has a rather frosty relationship with the media. It was apparent on the first day of Alabama spring practice that Saban was in midseason form in handling the media.

After being asked a question about Alabama possibly moving to a ball-control offense after the hiring of former Patriots offensive coordinator Brian Daboll, Saban used that as a moment to make a point about the media in general.

“I don’t know where you came up with we’re going to go to ball control. That’s not what we do. I mean the New England Patriots threw the ball over 60 percent of the time, which is more than we threw it. So where does that assumption come from?

“Or do you do what everybody else in the media does, just create some shit and put it on the wall and see what sticks, which is what I see happening everywhere. And the people who scream the loudest, you know, they kind of get the attention.”

Then Saban sharply transitioned into a rant about the NCAA changing rules about not having high school coaches running summer camps and connecting that to those “screaming the loudest” getting the rule changed before going back to the reporter.

But all the people who have common sense, they won’t say anything about [summer camps]. But the people who scream the loudest will get the thing changed…It’s the same thing with you. We’re going to be more conservative now on ball-control offense, where did that come from? I never said that, nobody in this building ever said that, so where did you come up with that? Just, you know, had a dream about it or what?”

Despite going a bit overboard responding to a bad question, Saban has a point. Sure, everyone in a media press conference has their own story to write with their own readers with varying degrees of knowledge. Not everyone in that room is an Alabama beat reporter with a dedicated Crimson Tide football website that assumes all their readers would know Alabama wouldn’t go to a ball-control offense.

But having said that, it should have been known that an NFL offense and college football offense is two different things and the Patriots still passed the ball over half the time so I’m not exactly sure how that’s “ball-control.” Maybe toward the end of a game where the Patriots blow someone out by 35 points that they protect the ball and run out the clock but that’s not really the gameplan in the first half.

Saban is right in that much of the media seem to ask dumb questions. And in this “hot take” “Embrace Debate” era of sports media, it does seem like the loudest people are the ones that are noticed and their knowledge range of the sport they are talking about is almost secondary. I’ve been in a few press conferences and if I feel like I have a good question where I would get something notable from the person speaking, I’ll ask the question. If I don’t feel like I have a good question, I’ll stay quiet and gather info from what else was said. It’s okay to not ask a question in a press conference and be able to do your job as a reporter. I’d rather keep my mouth shut instead of asking “how do you feel” after a win or loss because I think I have a pretty good idea.

But this doesn’t mean Saban is completely right about the media. Saban wants to talk about the media “creating some shit and put it on the wall and see what sticks,” we can also have a discussion about needing to create fake quotes from the media and putting them up on the wall in order to beat Washington in the Peach Bowl.

Pot…meet kettle. You two seem to have some things in common.