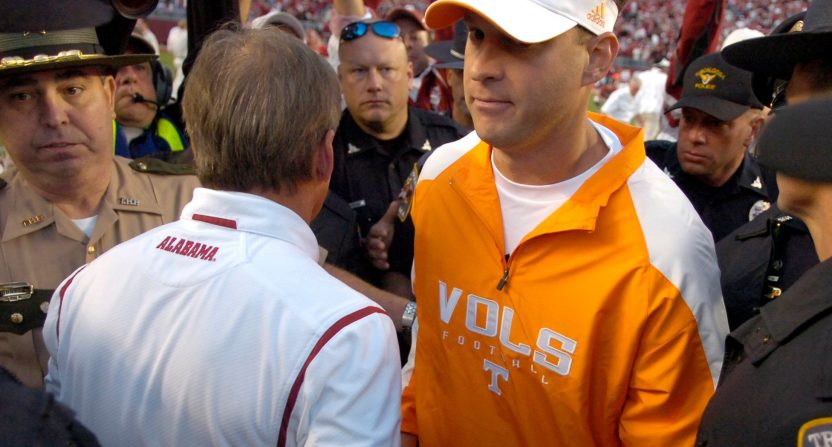 You might think that Alabama Crimson Tide head coach Nick Saban has it all figured out. Since Saban took over at Alabama in 2007, the Tide has won nin SEC championships and seven National championships. And considering Alabama is once again the No. 1 team in the nation heading into this weekend’s showdown with the No. 12 Ole Miss Rebels, it doesn’t seem like he needs much help figuring out this whole football thing.

Ole Miss head coach Lane Kiffin was the Alabama offensive coordinator between 2014 and 2016. And while many college football fans don’t think that Kiffin would have anything to teach someone like Saban, the Alabama coach admitted in Monday’s press conference that he did indeed learn something from him.

“We kind of took on the task, when he came here, of changing the whole offense to be more spread, to be more RPO-oriented, to use motions and formations to create issues and problems for the defense,” said Saban. “And he did a marvelous job of that when he was here. He’s continued to build on it. But I’d say I learned that from him because we sort of made that change so we all had to get together on how we were going to do things and what we were going to do. He did a really good job of that. He’s very bright, really good play-caller. So I learned a lot of offensive football from him.”

Kiffin probably wishes he hadn’t passed along that knowledge right about now. While Ole Miss looks like a really solid program right now, Alabama has a way of beating up really good football teams and making them look silly. The Tide had a tough time last weekend with Florida, which has a lot of people thinking the Rebels have a shot on Saturday. However, Kiffin reiterated on Monday that he knows what kind of Herculean task his team is in for.

“Like I said last week, I don’t see any holes in (Alabama),” said Kiffin. “Like I referred to, with free agency, if they did have them at receiver or linebacker, they filled them. So it will be very challenging, not just to play them, but over there.”

Kiffin hopes he’s still got a few lessons to teach Saban on Saturday but, as he alluded to, Alabama is favored by 16.5 points for a reason.