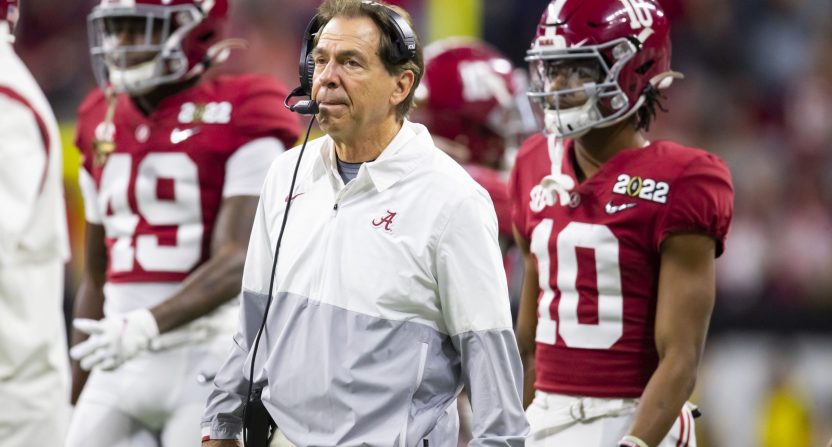 College sports are in a state of rapid change. The athletes have more control than ever, being able to monetize their name, image, and likeness rights while having the ability to transfer elsewhere.

That has been an unwelcome development for some of the more powerful people in college sports and every so often, a college coach or administrator says something that makes no sense and has people questioning their sanity.

It’s Nick Saban’s turn as the Alabama Crimson Tide head coach went on The Paul Finebaum Show to talk about parity in college football. How college football “always had parity” and that without having that parity, it could pose a problem for college athletics in the future.

"One of the things I like to see us be able to work back to is everything in CFB has always had parity."

I don’t know if Saban actually believes what he says or that he needs to open up a dictionary to look up the definition of “parity” but there has never been parity in college football. Even back in the early days when the sport was dominated by Ivy League schools like Princeton, Yale, and Harvard, there wasn’t parity.

And if Saban was referring to the recruiting side of the sport, there isn’t parity there either. Rich schools like Alabama have been spending hundreds of millions of dollars to renovate their training centers in order to have things like bowling alleys and barber shops because those are recruiting tools. If Saban thinks every D1 school has that, or has the financial capabilities to do that, he’s got another thing coming.

In fact, the one time Saban was in a system that had a semblance of parity, he largely failed at that. Maybe that wasn’t all his fault but in two seasons with the Miami Dolphins, Saban was 15-17 and he left for Alabama.

Anyway, the college football world took Saban to task for his take.

Nick Saban on the lack of parity in college football. https://t.co/kqDV7RQArZ pic.twitter.com/nSReyabFNX

What world has Nick Saban been living in? https://t.co/SLvopMeg2e