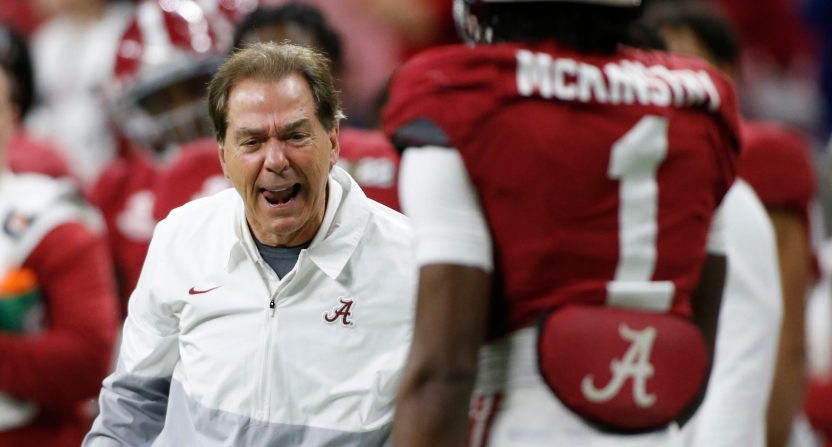 There are a lot of things you can say about Alabama Crimson Tide head coach Nick Saban. But however you feel about him, we know one thing for sure and that’s the man is singularly focused on winning championships.

We should know, he has seven national titles and 10 SEC titles to show for his five years with LSU and 15 years with Alabama. You could make the case that he is one of the greatest college football coaches of all time and his Alabama team has been a dynasty for so long that people have given up trying to comment on it.

In other words, you’d have to be pretty silly to publicly question Saban’s commitment to winning.

Enter U.S. Representative Ralph Norman, serving the 5th District of South Carolina. Norman was dismayed to hear that Nick Saban, a West Virginia native, had penned a letter along with other notable West Virginia-related sports leaders to Senator Joe Manchin in support of voting rights legislation. This is no small thing for Saban, who is not one to involve himself in political matters and also considers himself a friend of Manchin and has appeared in a campaign ad for him.

A Republican, Norman is against the notion of expanding voting rights legislation (for some strange reason). And he took to Twitter to take a shot at Saban for wading into political waters.

Nick Saban should focus on winning National Championships instead of destroying our elections. https://t.co/dQT1fhkFb1

“Nick Saban should focus on winning National Championships instead of destroying our elections,” wrote Norman, who either hasn’t been paying attention to college football for the past two decades or just really felt the need to get dunked on by college football folks. The latter is what ended up happening, naturally.

“Nick Saban needs to focus more on winning” is some take https://t.co/Jqu3vqoOnX

“Shut up and dribble” except you are talking to the greatest dribbler who ever dribbled or ever will dribble. Hall of fame take. https://t.co/wxdzJBOiQJ

Trying to dunk on NICK FREAKIN SABAN for not winning enough is like saying the weather sucks in California when it rains once a year. Galaxy brain stuff. https://t.co/2M7ZT4J7gP

Might have a little too much dip on your chip there Congressman https://t.co/AIip8Su1yK