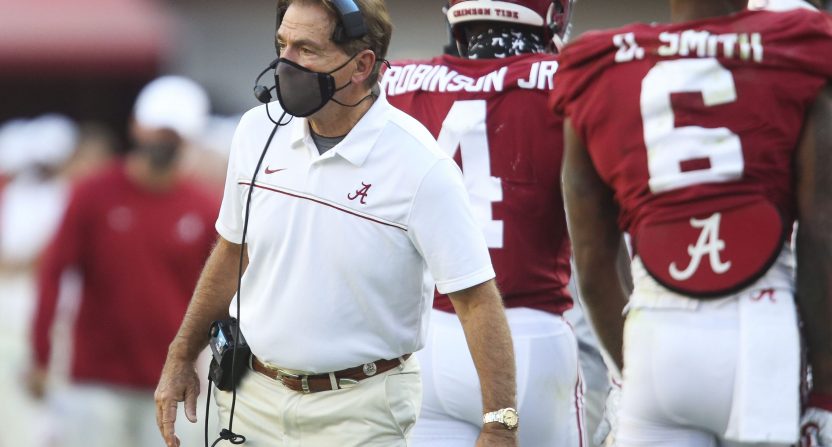 If one of the best defenses in the country can’t find a way to defend Alabama, what prayer does anyone have? The No. 3 Georgia Bulldogs came into their mega matchup with No. 2 Alabama being praised for having the best defense in the SEC, if not the nation, and even they discovered first-hand just how difficult it is to keep Alabama’s wide receivers from making plays for a full 60 minutes.

The first 30 minutes of this highly-anticipated SEC crossover game, which could likely be a preview of the SEC Championship Game, was about as even as it could get. Georgia took a 24-20 lead into the halftime break, but Georgia head coach Kirby Smart knew the job was not done yet. To say Saturday night’s SEC contest was a tale of two halves would be an understatement. Nick Saban’s Tide came out of halftime on a mission, and they never looked back. Alabama surged in the second half with a 21-0 run to send Georgia home wondering what the heck happened (a question that is often raised after games with the Tide by the folks in Athens).

What happened was Georgia’s defense wasn’t able to slow down Alabama’s embarrassment of riches at the wide receiver position. Jaylen Waddle and DeVonta Smith each had over 160 receiving yards and combined for three touchdowns.

Georgia’s defense had allowed 595 passing yards combined in their first three games of the season (Arkansas, Auburn, Tennessee). Alabama quarterback Mac Jones continued to impress throwing the football with 410 yards and four touchdowns. Jones is now tied for the most career 400-yard passing games in Alabama history, joining his predecessor, Tua Tagovailoa. This is just a hunch, but Jones is probably going to obtain sole possession of that record before this season is over.

On the next play, Mac Jones and John Metchie III connected for a play-action bomb. 7-0 Alabama. pic.twitter.com/dE5klKkvww

With a night like that, it was easy to forgive and forget about what happened on the first play of the game. Jones was hit by a Georgia defender as he let go of a pass and the disrupted pass was picked off by Richard LeCounte.

It was the perfect way for Georgia to start the game. Rather, it would’ve been if the Crimson Tide didn’t get a big man interception by defensive lineman Justin Eboigbe, after a Stetson Bennett pass was blocked at the line of scrimmage.

Of course, not to take anything away from what Jones has proven capable of doing, but it helps having receivers like Jaylen Waddle and DeVonta Smith to throw to. Smith (167 yards, 2 touchdowns) and Waddle (161 yards, 1 touchdown) each showed off their mix of terrific hands, feet placement, concentration, and speed all night long. It showed best in the second half of the game. When you have this amount of talent, it has to be fun being the offensive coordinator. Alabama’s Steve Sarkisian had some fun designs lined up to mix things up against Georgia’s aggressive and smart defense. Even plays that didn’t go for touchdowns showed just how valuable a player like Waddle is in the offense.

Really like the way Alabama set this up to get the ball to Waddle. https://t.co/jjuBy8iBdJ

All week long, there was no shortage of reasons to be excited about this matchup. But the headlines took a different spin leading up to the game midway through the week when Nick Saban tested positive for COVID-19, putting his availability on the sideline in question as the week unfolded. Fortunately for Alabama, Saban successfully tested negative for the virus three times prior to the game being played, allowing him to do what he does best- whipping his former assistants.

And Nick Saban is now 22-0 against former assistants.

Just this season, Saban is 3-0 against his former assistants; Smart of Georgia, Lane Kiffin of Ole Miss, and Jimbo Fisher of Texas A&M. Saban’s Tide have outscored the two (ranked) teams coached by former assistants 93-48 (156-96 if you include Ole Miss). He’ll look to improve his overall record against former assistants to 23-0 when Alabama returns to action next week on the road against Tennessee, coached by Jeremy Pruitt. The Vols couldn’t be getting Alabama at a worse possible time, as Alabama continues to steamroll their opponents, and Tennessee has dropped two games in a row in the SEC. After losing to Georgia last week, falling apart in the second half, the Vols were blown out at home by Kentucky. Then again, is there ever a really good time to catch Alabama? This year, absolutely not.

Georgia will still stand a very good chance of getting a rematch with the Tide. Despite the tough setback in Tuscaloosa, Georgia still appears to be the team in the best position in the SEC East. Georgia gets a bye week next week before trying to rebound at Kentucky. But the biggest challenge remaining in the regular season for Georgia should come on Nov. 7 in Jacksonville against the Florida Gators. The two top teams in the SEC East each have a loss on their record already, and that game could ultimately determine who will go to Atlanta. And if you see anyone in the SEC West capable of challenging Alabama for that division’s crown, please let me know. It doesn’t look as though there will be a serious challenger to Alabama in the SEC West, and possibly the SEC, in 2020.