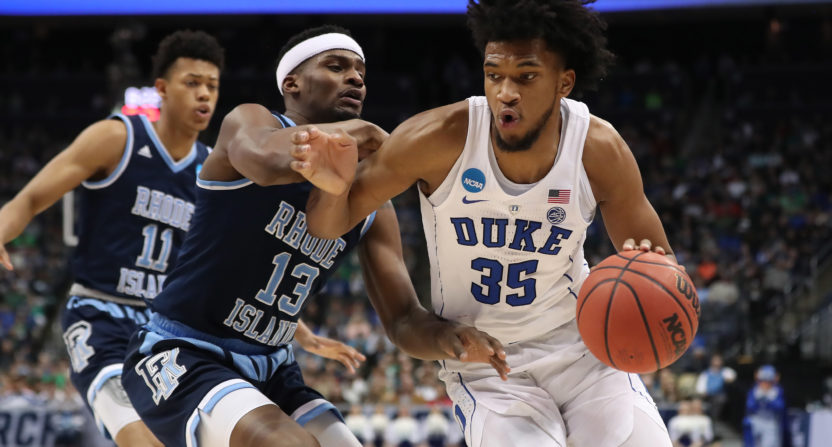 On Wednesday, Oregon Live published a detailed look at Nike’s involvement in the college sports underground economy at the center that has been in the news lately thanks to an FBI probe.

The part of the story that has gained most attention concerns Duke freshman superstar Marvin Bagley Jr. Bagley arrived in Durham as the top recruit in the Class of 2017, then lived up to all hype by averaging 21 points and 11.1 rebounds and leading the Blue Devils to the Elite Eight. He will likely be a top-5 pick in the NBA Draft this spring, at which point he will sign a contract worth millions of dollars. In other words, he’s a big deal.

Well, somewhere along the line, Nike seems to have enriched Bagley and his parents, to the point that a once-bankrupt family could afford a home in a gated Southern California community.

Marvin Bagley Jr. and his wife filed for Chapter 7 bankruptcy in April 2008, during the Great Recession, listing their combined annual income at just over $44,000. Property records indicate the Bagley home was sold in 2011 at a trustee’s sale — typically a sign of a foreclosure.

Four years later, shortly after Nike’s sponsorship of the team became public, they left their working-class neighborhood in Phoenix for Southern California. In a tax filing, the Bagleys listed a home address in a gated subdivision in Northridge called Porter Ranch. Similarly sized homes in the vicinity typically sell for $750,000 to $1.5 million, said Jose Contreras, a Coldwell Banker real estate broker active in the area. Rents in the neighborhood range from $2,500 to $7,500 a month.

For people who have followed college sports for a long time and become used to its rules and its conventions, the first instinct here is outrage. A Duke player receiving improper benefits! Did Coach K know? Will wins be vacated? How can we ensure this never happens again?

But when you take a step back and think about it a bit… Nike, a massively rich private company, might have paid some cash to a talented individual, in a business deal that could work out for both sides. And the arrangement had the side effect of helping out a family in need. That’s what we’re supposed to be angry about?

Every time a story like this comes out, the NCAA looks a bit more ridiculous for its amateurism dogma. The governing body works so, so hard to prevent athletes from getting paid by anyone — an agent, a shoe company, a booster, even a tattoo artist — even when they have such obvious value. With all the money in college sports, the college-sports system has become not only unjust but also untenable.

As more and more high-profile players and programs get caught in these types of “scandals,” the NCAA will inevitably have to decide whether enforcing amateurism is worth the hassle. And maybe at some point the people in charge of college sports will realize, as many other Americans have, that a shoe company giving money to the family of a basketball player, particularly one in financial need, isn’t any sort of crime. It’s actually the right thing to do.