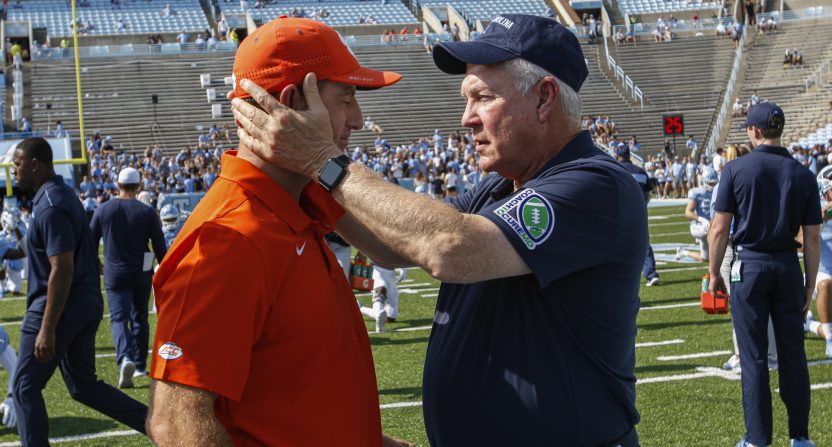 The Clemson Tigers have been college football’s top dog for a few seasons now. In each of the past three years, the Tigers have made it to the College Football Playoff, winning the national title twice. In that span, they’ve only lost two regular-season games.

It looks like the No. 1 team in the nation may have just survived the 2019 version against the North Carolina Tar Heels.

Clemson got off to an uncharacteristically slow start on Saturday and found themselves in a 14-14 tie at the half. That’s a notable score given that the Tigers hadn’t given up 14 points to an opponent all season long, let alone in one half. The half also included a costly Travis Etienne turnover, a sluggish offensive gameplan, and some big plays given up to UNC that allowed the 28-point underdog to keep pace with the Tigers.

Clemson fails to convert and has to punt, tied 14-all midway through the 3rd #CLEMvsUNC pic.twitter.com/kgGagQ6sMK

Both teams went scoreless in the third quarter but just as everyone started to wonder if the Tar Heels might be able to pull this off, Trevor Lawrence connected with Tee Higgins for a go-ahead touchdown that put Clemson up 21-14.

North Carolina then marched down the field, converting a fourth down along the way, and got all the way down to the goal line before scoring to pull within one.

UNC pushes it across the goal line, Clemson leads 21-20. https://t.co/N4c0xoXDwb

With a little over a minute left in the game, Mack Brown had a choice to make. Kick the extra point and hope your defense can withstand Lawrence and Clemson’s push down the field for a game-winning field goal, or go for two and try to win the dang game right here and now. Brown, feeling like it was now-or-never to take down the defending champs, opted to go for the latter. In fact, he had his hand up for the “two” signal immediately after the touchdown.

The decision to go for it was mostly lauded on social media, but the play itself, an option run, left a lot to be desired. Clemson defenders swarmed to the ball and easily tackled the UNC quarterback, preventing the conversion and effectively winning the game right there.

North Carolina wanted to take down the No.1 team in the nation, Clemson, but couldn’t convert this 2-to attempt to win it.

While Brown’s decision to go for two will be second-guessed by some, it was the kind of decision that will pay dividends with his players, who now know their head coach trusts them to get it done when it matters. And North Carolina’s showing helped to remind people that Mack already has the program headed in the right direction. You know what they say about moral victories, but Tar Heel fans should be happy with that, at least.

As for Clemson, even in victory, this doesn’t really do much to help them in the court of public opinion. The ACC is considered pretty mediocre this season and every time the Tigers don’t steamroll a conference foe they’re setting themselves up to be belittled by those who look at the SEC and Big Ten schedules as gauntlets. It also doesn’t help that Texas A&M, who was supposed to be Clemson’s marquee non-conference opponent this season, seems to be hanging on for dear life.

Of course, that doesn’t take into account the complexities of a college football season and the ways even great teams get tested along the way. Then again, nuance is not something that comes easy in discussions around college athletics.

Don’t be too surprised to see Alabama and Georgia siphon away a few first-place votes from the Tigers, not that it matters all that much either way. Still, a win’s a win, and when you’re playing on the road against a conference opponent, you take it, you run, and you live to see another day.