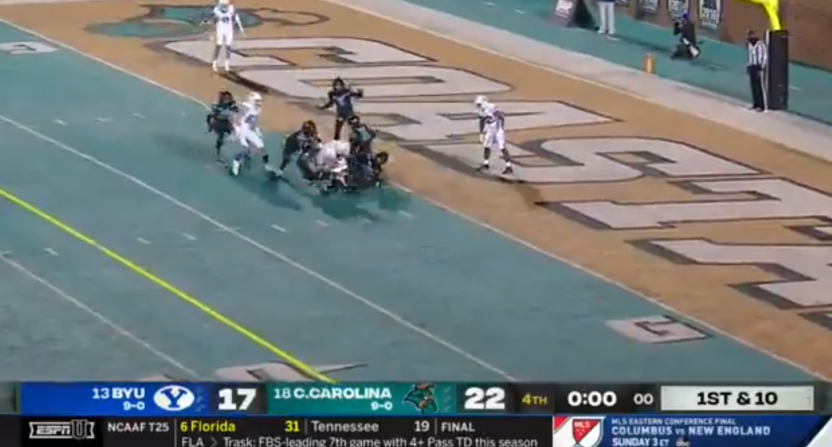 The No. 18 Coastal Carolina Chanticleers took down the No. 13 BYU Cougars 22-17 in a battle of two unbeaten teams (and in the battle of “Mormons vs. Mullets”), and the game featured a finish reminiscent of Super Bowl XXXIV between the Rams and Titans.

First, Coastal Carolina made a debatable decision to punt on 4th-and-2 at their own 47 with 1:03 remaining, rather than just try to get two yards to put the game away and not give the ball back to BYU superstar quarterback Zach Wilson. And Wilson showed why that was a questionable decision, marching BYU down the field and with throws that show why he’s a potential top-three pick in the 2021 NFL Draft (heck, he’s the No. 2 overall pick in the latest mock draft from Dane Brugler at The Athletic).

On the final play, BYU had the ball at Coastal Carolina 18-yard line with three seconds left. Wilson threw a laser to Dax Milne inside the five, but Milne was stopped just short of the goal line (a la Kevin Dyson).

Ultimately, the Coastal Carolina defense was able to prevent BYU from getting into the end zone, and did a great job of this all game against a Cougars offensive attack that has been putting up huge numbers all season.

Offensively, the Chanticleers got it done in the running game, with 54 carries for 281 yards (5.2) AVG ) and three touchdowns. Freshman quarterback Grayson McCall had 12 of those carries for 68 yards, and had a crucial run in the fourth quarter that featured an ankle-breaking juke.

Grayson McCall with a nasty fake and juke on the keeper. pic.twitter.com/oZTxWNsdhe

Things got heated in this game, particularly at the end of the first half.

Things getting a bit chippy between No. 13 BYU and No. 18 Coastal Carolina going into halftime.

"Well, they said it's the Mormons vs the Mullets." pic.twitter.com/fWHjrm9G6z

But it’s a massive win for head coach Jamey Chadwell and the Coastal Carolina program. This is a big résumé-booster for a team that had been viewed as only the 18th-best in the nation by the College Football playoff committee. Now at 10-0, and with a victory over a very good team, it will be interesting to see how high the Chanticleers move up the CFP rankings. At the very least, Coastal Carolina should be firmly in the New Year’s Six bowl conversation.

As for BYU, many college football evaluators felt the Cougars were hosed with the No. 13 ranking for the College Football Playoff. So, this will serve as a “told ya so” moment for the committee, but that’s pretty unfair for a BYU team that has had a remarkable season and had to play another really good team on the road on short notice.