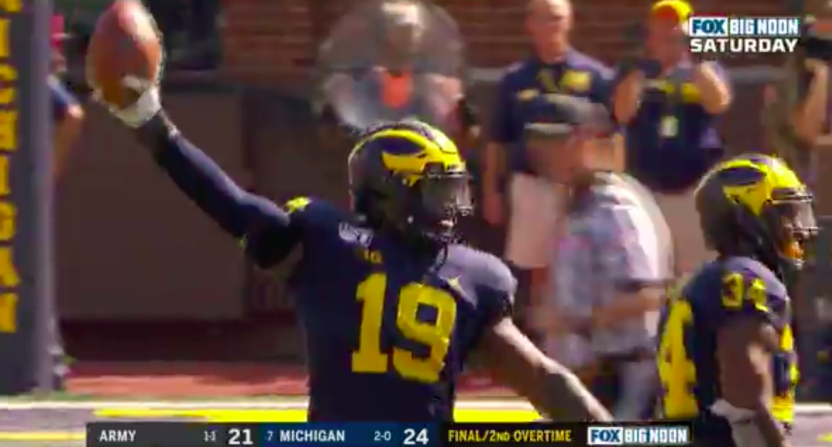 Jim Harbaugh is the best head coach in college football between February and August. He grabs the most headlines, makes the most noise, and creates the most hype. The problem for Jim is what happens between September and January. You know, the actual season. That’s where Michigan has failed to make good on all that hype, often falling short to Urban Meyer’s Ohio State Buckeyes. Now that Meyer is gone, however, it was supposed to be different. The 2019 season was supposed to be Harbaugh’s chance to take the reigns of the Big Ten from the hated Buckeyes and not let go.

Two weeks into the season and it already looks like that plan might be in big trouble.

In a scene reminiscent of Michigan’s epic upset loss to Appalachian State in 2007, the Army Black Knights kept pace with the Wolverines all day on Saturday. There were plenty of mistakes on both sides, but Michigan certainly shot itself in the foot with some shoddy playcalling and bad penalties.

Towards the end of regulation tied 14-14, Army has a chance to seal the victory with a 50-yard field goal. However, it went wide, sending the game to overtime.

In overtime, the Black Knights took advantage of more Michigan miscues to score a touchdown on their opening drive.

Army gets the TD!

After a dubious pass interference call, Michigan responded with a touchdown of their own. They elected to go for the PAT, which just barely scraped inside the posts and we moved on to double overtime. Michigan started with possession but was unable to get it in the endzone, settling for a field goal and a 24-21 lead.

Army took over with a chance to win the game outright but ran into their biggest nemesis…attempting a pass. Black Knights quarterback Kelvin Hopkins fumbled the ball as he tried to make something happen, Michigan recovered, and the Wolverines escaped with a 24-21 win.

Jim Harbaugh isn’t on any kind of real hot seat, yet, but given the hype and headlines he’s brought with him, he was expected to have the Wolverines competing for national titles by now. If Saturday was any indication, he still hasn’t gotten the product on the field to match everything that happens off of it, and it begs the question how Michigan intends to handle the likes of Michigan State, Wisconsin, Penn State, Notre Dame, and Ohio State when it can barely get past Army in The Big House.