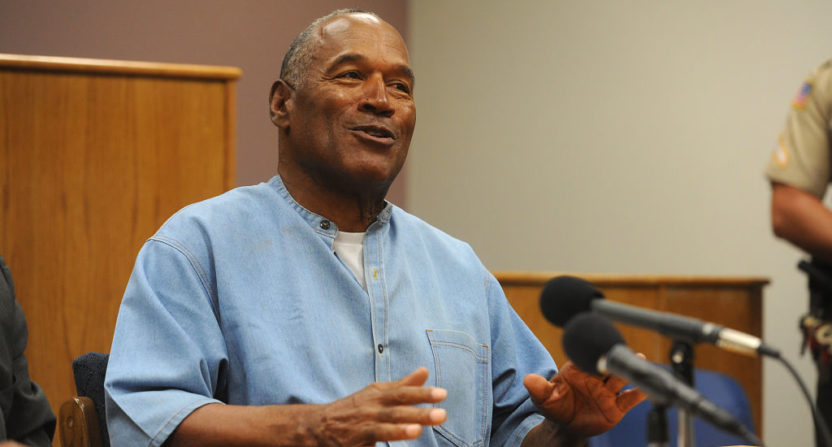 There are plenty of reasons why a TV network may want to interview O.J. Simpson. The 70-year-old is a former actor, NFL star, Heisman trophy winner, convicted felon, and defendant in a double murder trial.

There are plenty of other reasons why an NBC or FOX or CBS or ESPN may want to interview Simpson, but no matter how many reasons you can come up with, there are more than enough reasons why interviewing him isn’t worth the stress.

For one, a TV network will likely have to pay Simpson for the opportunity to interview him. He’s not going to do this for free.

According to The Hollywood Reporter, Simpson’s associates are asking for millions to interview the famous athlete.

“It is treacherous,” says one TV news veteran. Not with a “10-foot pole,” says another.

In part that’s because those representing themselves as his associates — and there are many of them — are asking for a seven-figure payout for an interview with Simpson.

Seven figures to interview someone who was acquitted for two murders in 1994 and then later served nine years after a botched robbery in 2007? Pass. Plenty of people remember Simpson for his excellence on the football field, but plenty more probably remember him as the man in the white Bronco.

THR said they had spoken with ABC, CBS, and NBC representatives, all of whom said they would never pay for a Simpson interview as it violates “news division standards.” On top of that, A+E Networks and Discovery have reportedly also turned down opportunities to interview Simpson.

While paying Simpson is one major reason to not interview Simpson, ethics are another. Plenty of terrible people have been interviewed before, whether it’s a dictator from a foreign country or other athletes who have committed crimes, but Simpson is in his own category.

Simpson has been charged with murder and while he was eventually acquitted of those charges, he was eventually ordered to pay $33.5 million for the victims’ wrongful deaths. While it seemed at first like Simpson may have overcome his troublesome past, he later was charged with felonies for armed robbery and kidnapping. What Simpson was arrested for and charged with in 2007 should’ve kept him in prison until 2040, but due to parole he was able to get out after just nine years.

Ethically, why would anyone want to interview him? It’s likely Simpson would try to show remorse, but at the end of the day that may just fall flat. On top of that, while interviews with dictators for example aren’t necessarily important enough to occur in my opinion, they can be educational.

The same can apply to a criminal who has actually shown signs of changing and not falling back on old habits. The same can’t be said about Simpson since he’s been out of jail for less than a week and it’s far too soon to tell if his recent jail stint changed the former NFL star.

Money and ethics are two great reasons to not interview Simpson. A third is advertising. That’s a key reason why TV networks are also reluctant to interview the former inmate.

That’s an important quote, because if a news network was able to secure an unpaid interview with Simpson, here is what would happen next:

It really is as easy as a four step process.

“If any anti-O.J. sentiment starts, I could see people pulling away,” a media buyer told THR.

All it takes is one big company and the rest could fall into place, as we saw a couple months ago on Fox News’s Bill O’Reilly show. That was a completely different incident, as O’Reilly had been accused of sexual harassment and hadn’t been convicted or charged with anything at the time. In Simpson’s case, he has already been both convicted of crimes and served time for them.

A fourth and final reason is credibility. While credibility can be applied to each of the other three reasons, there is a reason why it stands out on its own.

Simpson can fit into two kinds of network categories: news and sports. While he does touch on entertainment, he wasn’t as notable for his acting as he was for his athletic achievements and his time in the news.

In today’s world, both sports and news networks are too preoccupied with far more important discussions to spend credible news time on an interview with Simpson.

In the news world, NBC, FOX, CBS, and ABC are currently focusing on gun rights, the neverending Russia investigation, and the ongoing turmoil inside the White House. All three of those topics are quite relevant in today’s public conversation and overshadowed Simpson’s release from prison.

In the sports world, the protests during the national anthem are dominating the airwaves of sports networks. During a time when this debate is ongoing, along with more longer term issues like pace of play in baseball and concussions in football, why would a network spend time interviewing a controversial figure in Simpson?

Ken Fang already wrote over at Awful Announcing why you shouldn’t expect to see O.J. Simpson in sports media or reality TV. The same can be applied to a potential interview. Don’t expect to see one.

1 thought on “There is no point in interviewing OJ Simpson”