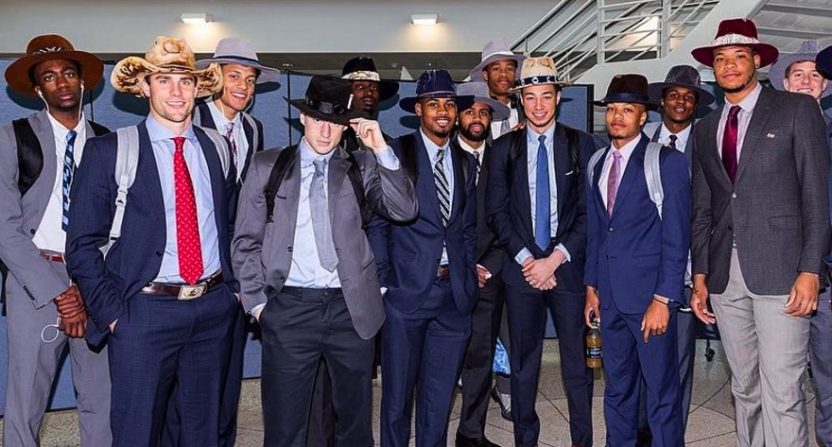 The North Carolina Tar Heels are a No. 1 seed in the NCAA Tournament’s South Region, tipping off Friday  against Texas Southern. UNC is a favorite to win the tournament, but there is no team that can outdo them on the fashion front during March Madness.

Thursday, the Tar Heels arrived in Greenville, South Carolina sporting some pretty awesome fedoras. (Not to be confused with UNC football coach Larry Fedora.) The players and coaching staff were outfitted with sharp custom hats made by freshman Shea Rush.

Teams dressing up for road trips is nothing new in college or pro sports. And a trip during the NCAA Tournament is always special, especially for a traditional powerhouse like North Carolina. But the fedoras add a distinct look to the Tar Heels’ traveling party, especially when the hats were made by someone on the team.

A student-athlete presumably wouldn’t have the time on his or her hands to make 24 custom fedoras for teammates and coaches. But as reported by USA Today‘s Nicole Auerbach, making hats has been a hobby for Rush going back to high school. When he began wearing one of his fedoras with a suit, teammates liked the look and asked if Rush could make hats for everyone on the team.

In one month, the freshman made his contribution to the Tar Heels’ 2017 tournament run, hand-making 23 more fedoras.

The inspiration for such a fashionable statement? According to Rush, it came from the likes of Russell Westbrook and Cam Newton, two players known to push the envelope with pre- and post-game fashion.

“I figured, ‘Wow, I really like that look, so I’m going to make my own,’“ Rush told Auerbach. “I ordered materials, looked up how to do it online and went for it.”

Rush’s addition to the Tar Heels’ traveling fashion ensemble continues a long relationship between sports and fashion that goes back to the days of Joe Namath with the New York Jets. Though his inspiration was a bit more recent, the freshman forward took his role seriously, factoring in the look of his teammates when designing his fedoras.

“You definitely want a bigger brim for the bigger the guy; it’s got to be in proportion,” Rush said. “The little guys need ‘em a little smaller. You’ve got to make it fit the person.

“I also had to try and make sure the hat fits with all the hair. Our guys have a lot of hair. Joel (Berry) was tough. Justin (Jackson) was tough. You’ve got to make sure there’s room in there.”

All the pinches offered… which one is right for you? #comingsoon

Should Rush not have a future beyond the college basketball court, it appears he has a future in the fashion industry. Fedoras are a big trend right now in sports and celebrity culture. Pharrell Williams is a red-carpet sensation, thanks largely to the hats he wears.

Rush’s hobby is a way for the freshman to get lost in something that isn’t involved with basketball.

“I use beaver fur for the hat, steam the hat, sand the hat — there are a lot of steps that go into it,” Rush said. “I play so much basketball. It’s really just a way for me to lose myself in something else.”

Rush hasn’t played very much this season, averaging just under two minutes per game. But role players make any contribution they can to the team, and Rush has certainly done that. If the basketball thing doesn’t work out for him, designing hats looks like a definite possibility for his future. He’s already got the brand — Hats by Shea — figured out. (Rush is also a talented photographer, which you can see at his website.) At the very least, Tar Heels fans should be a good market for him.