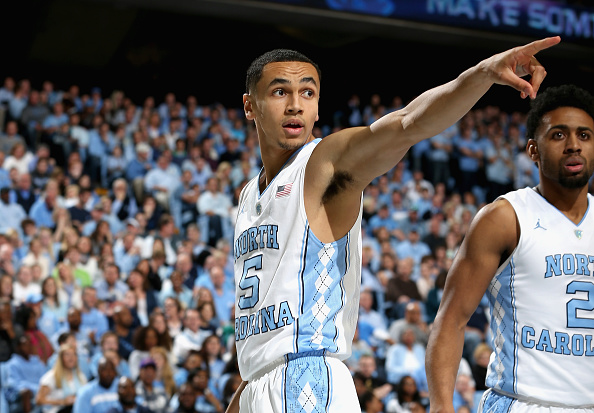 LOUISVILLE, Ky. – Perhaps it was a question Roy Williams has grown tired of answering. Maybe he was just generally frustrated after watching all the missed shots and seeing a 12-game winning streak snapped. The North Carolina coach reacted as if someone just spit into his drink.

The No.2-ranked Tar Heels’ 71-65 loss to No. 19 Louisville wasn’t unexpected. They were underdogs and this was arguably their toughest game to date. North Carolina (19-3, 8-1 Atlantic Coast Conference) fattened up against an easy portion of their league schedule.

Monday was a test. The exam revealed that North Carolina is as flawed as everyone else in this topsy-turvy college basketball world. They can’t shoot from distance (3 of 17 from 3-point range vs. Louisville). Even more troublesome: Marcus Paige’s struggles continue. The league’s preseason co-player of the year was 3 of 13 from the field for nine points. He didn’t have an assist in the first half.

This all added up to North Carolina’s first loss since dropping a last-second decision at Texas 84-82 on Dec. 12. It also prompts more questions about the Tar Heels, the preseason Associated Press No.1.

Some questions irked ol’ Roy boy. Here was his response when asked about Paige:

“Guys, I’m not getting on you but damn, he hasn’t shot it worth a frankity-frank for four or five games,” Williams said. “Am I supposed to put him out and send him to Siberia? He’s one of the greatest kids I’ve ever coached. I’m going to stick with him. I’m going to coach him. He’s going to try and take shots. I don’t have any potion I can rub on people.”

Since a 30-point outburst at Florida State, Paige has a grand total of 36 points over his past six games. He has reached double figures just once: 12 points against Boston College last Saturday. While the senior has never been a great shooter, he could finish with his worst field-goal percentage (39.8) since his freshman year (35.6).

That’s probably not good enough to advance deep in the NCAA tournament.

“I don’t think there’s a difference (with my shot),” Paige said. “I’ve made a couple less. I took good shots today. I missed a lot of bunnies around the rim. That was more disappointing.”

Paige has transitioned to a new role with the Tarheels. He has been moved off the point with sophomore Joel Berry II handling most of the playmaking duties. The change means Paige has the ball in his hands less. On Monday, the senior missed his first four 3-point shots and finished 1 for 6 from beyond the arc. At times, he seemed like a spectator in the offense.

Has the transition from point guard to shooting guard been difficult?

“It’s definitely an adjustment but I’ve played (16) games now,” said Paige who missed the North Carolina’s first six games with a broken bone in his right hand. “It’s not really relevant to what’s going on now. My first couple of years I played PG and shooting guard. I’m completely fine.”

If Paige doesn’t break out of his slump, it is hard to imagine North Carolina making a championship run. He has to make baskets from long distance because the Tar Heels don’t have a lot of perimeter-shooting options. They entered the Monday’s game shooting .308 from 3-point range – No.312 out of 346 teams.

North Carolina is entering the toughest part of its ACC schedule. It travels to Notre Dame on Saturday and has yet to play Pittsburgh, Duke, Miami and Virginia. It stands to reason those teams will steal a page from Louisville’s game plan.

Limit North Carolina’s transition game (6 fastbreak points – none in the first half). Pack in the defense to force the Tar Heels to beat you from the outside. Williams’ credited Louisville’s matchup zone defense for the season-low 34.5 percent shooting. The Tar Heels also tallied a season-worst in points.

They were within 67-65 with 35 seconds left but then missed five straight shots to end the game.

“We’re a pretty good passing team and we had two assists in the first half,” Williams said. “That’s not the way we play.”

The good news for North Carolina: there isn’t a dominant team out there. Over the course of the season: there have been five teams ranked number one: North Carolina, Kentucky, Michigan State, Kansas, and Oklahoma.

Those teams have flaws. Warts and all, North Carolina might still be good enough to reach the Final Four. It probably can’t vastly improve its 3-point shooting. But clearly Marcus Paige playing more like vintage Marcus Paige will enhance its chances.

“We can’t be perfect,” Paige said. “We didn’t play anywhere close to our potential. The last I checked, we’re still at the top of the league. We have opportunities to get better. We slipped up today.”