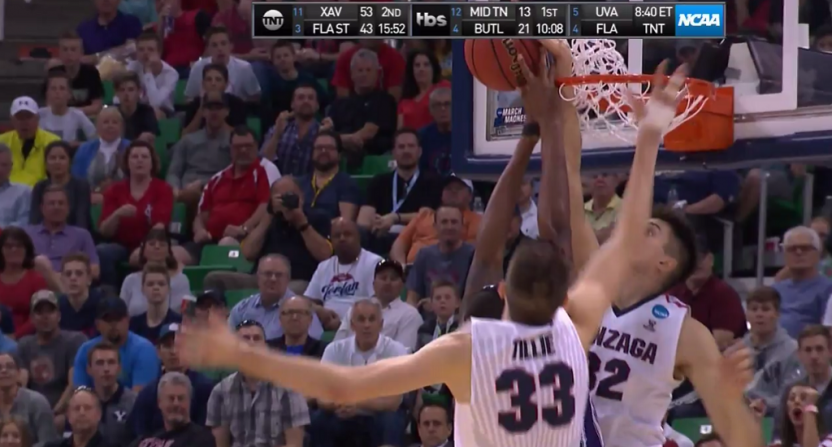 It looked like top-seeded Gonzaga was going to roll eighth-seeded Northwestern on Saturday in Salt Lake City, with the Wildcats trailing by as many as 22 points, and 18 points at halftime.

But Northwestern came roaring back, and was down just five points when center Derek Pardon went up for a dunk in the game’s final five minutes. Pardon was rejected, but the play should’ve been ruled goaltending as Gonzaga’s Zach Collins clearly had his hand going up through the hoop when he made the block.

Instead, play was allowed to continue on, and Northwestern head coach Chris Collins ran onto the court furious about the no-call. This resulted in a technical foul, and Gonzaga’s Nigel Williams-Goss drained the two ensuing free throws.

Here are videos of the scene, as well as Collins being read a statement in his postgame press conference about the missed call:

1. It’s a horrible non-goaltending call, as we’ve established.
2. Chris Collins still has to know better than to run onto the court towards the official there. Every point in that spot is precious, and even though he was 100% correct about his team being jobbed, he can’t get a technical foul there. Those are free points he’s giving the other team with under five minutes left in a close game. Be angry and yell all you want, but do it from the sideline.

So, a very lame sequence for Northwestern, and it definitely played a huge part in a six-point loss (79-73). Be better, officials. Be better.