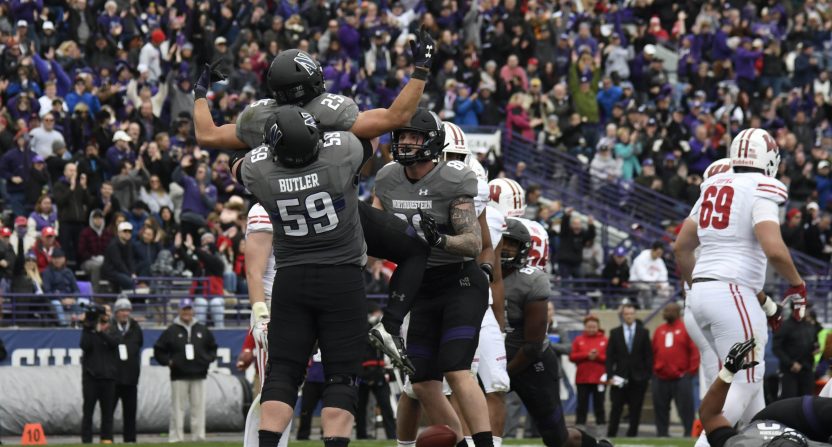 With October coming to a close, the division and conference championship chases around college football are turning around the final corner and beginning to come down the home stretch. In the SEC, Alabama and Georgia continue to set the pace. Clemson is pulling away from the pack in the ACC after its biggest blowout of Florida State in program history. But three division leaders starting to come into view in their respective division races may be a bit surprising as the calendars prepare to flip to November.

Northwestern, Virginia, and Washington State are all sitting on top of their respective division races and the possibility all three play for their conference championships is not a far-fetched idea, especially after the results of Week 9.

Northwestern all alone in front of Big Ten West Division

It was a great day to be a Northwestern Wildcat. Northwestern hosted Wisconsin at home, and the Badgers played without starting quarterback Alex Hornibrook due to a lingering concussion concern. Northwestern came into the week with a 4-1 record in Big Ten play, and preseason favorite Wisconsin was 3-1 (both teams had lost to Michigan), so the stakes were pretty high for the game. Clayton Thorson didn’t have a spectacular day throwing the football, but it was better than his counterpart making his first collegiate start, Jack Coan. Thorson was also an asset running the football with a pair of rushing touchdowns.

A week after needing to rally on the road to beat Rutgers, Northwestern pulled away from the Badgers for a 31-17 victory.

The win assured Northwestern would stay in first place all by themselves thanks to having played an extra conference game than everyone else in the division. But what happened elsewhere in the Big Ten West only favored Northwestern even more.

At the same time, the Wildcats were playing Wisconsin, Purdue was on the road against a battered Michigan State program. The Spartans were also without their starting quarterback, Brian Lewerke, as well as a handful of other key players. At this point in the season, Michigan State is playing hurt in many areas, and they were hosting a Purdue team that has been on a roll and coming off a monster win against Ohio State last week. But all of the sparks coal in the Boilermakers’ engine had run out and Purdue only managed to score 13 points and lost by 10. It was Purdue’s second loss in the Big Ten, the first being in the season opener against Northwestern. Purdue is not only in the rearview mirror of Northwestern, but the Wildcats also own a head-to-head tiebreaker against Purdue (and Wisconsin, of course).

But wait, there was more.

Iowa kicked things off in a soggy Happy Valley to play Penn State in a crossover matchup, and the Hawkeyes took a very unorthodox approach to score all 24 of their points; two safeties on special teams, two field goals, an interception returned for a touchdown, and a fake field goal pass by the holder to a defensive lineman for a touchdown. If Iowa could just score one touchdown on offense (and they had their opportunities), who knows what the story could have been. Because the offense could not get in the end zone against the Nittany Lions, Iowa came up on the wrong end of a 30-24 decision for their second loss of the year.

In what appeared to be a four-team race in the Big Ten West, Northwestern was the only team to win in Week 9 and the others took a loss. With just three conference games remaining and two of those coming against Minnesota and Illinois, the fate of the Big Ten West could be decided by what happens in two weeks when Iowa hosts Northwestern. But first, Iowa has to take on Purdue next week.

The Big Ten West is still up for grabs, but Northwestern could be in the most favorable spot in the final month of the season.

I can't wait for the Washington State-Northwestern Rose Bowl

Similar to Northwestern, Washington State picked a good day to beat a top 25 opponent within the division, especially when it could have been one of the division opponents most likely to win the division if they managed to win.

Blake Mazza's field goal is good to give the Cougars the lead late in the 4th quarter! #JoinTheHunt #GoCougs pic.twitter.com/kwGV5jFaWS

Elsewhere, Washington — the preseason Pac-12 favorite — was caught up in a defensive battle on the road against California in a coaching matchup of Chris Petersen and his former assistant Justin Wilcox. A 12-10 loss to the Bears handed the Huskies their second loss of the year in the Pac-12 (the other being a loss to Oregon) and the third of the year. The Apple Cup could still end up deciding who wins the Pac-12 North when the Huskies and Cougars renew their rivalry at the end of the regular season, but Washington State is already racking up head-to-head tiebreakers with wins against Oregon and Stanford.

Stanford could potentially do Washington State a big favor next week too. The Cardinal are heading to Washington for a very important game in the division as the winner will remain in the hunt for the division crown. Washington State will have to avoid being upset by Cal as the Bears head to Pullman, but a road trip to Colorado and a home game against Arizona could be favorable matchups for the Cougars.

Virginia leading a three-team race in the ACC Coastal Division

Virginia is not the only team in the ACC Coastal Divison with one conference loss, but they are the only one with four wins. Because of that extra game played in the conference, Virginia is sitting on top of the division with Virginia Tech and Pittsburgh each looking to make a push for the division. Virginia took care of business at home against North Carolina just days after Virginia Tech was embarrassed at home by Georgia Tech.

The Panthers have snuck into the division hunt while flying under the radar (being blown out by Penn State and UCF and losing to Notre Dame can do that), but a 54-45 win against Duke just weeks after topping Syracuse has Pitt in a very interesting spot.

If things go well, the Panthers could even seize full control of the division in the next two weeks.

Pitt gets both Virginia and Virginia Tech in the next two weeks; the Panthers travel to Virginia next Friday night and then host the Hokies the following week with an extra day to prepare. Going 2-0 in those games would make Pitt the team to beat in the division even with a road game at Miami in the final game of the year (we shouldn’t forget about Miami just yet, by the way).

But if Virginia wins next week, they could gain steam with a manageable schedule that steps out of conference play for one game before closing things out on the road at Georgia Tech and Virginia Tech.

So there you have it. Northwestern, Virginia, and Washington State are all in front of their division foes and have a chance to control their path to a conference championship game appearance. Each would be making their first appearance in the conference title game if it happens. And if Kentucky knocks off Georgia next week, we’ll just add another team to the mix.