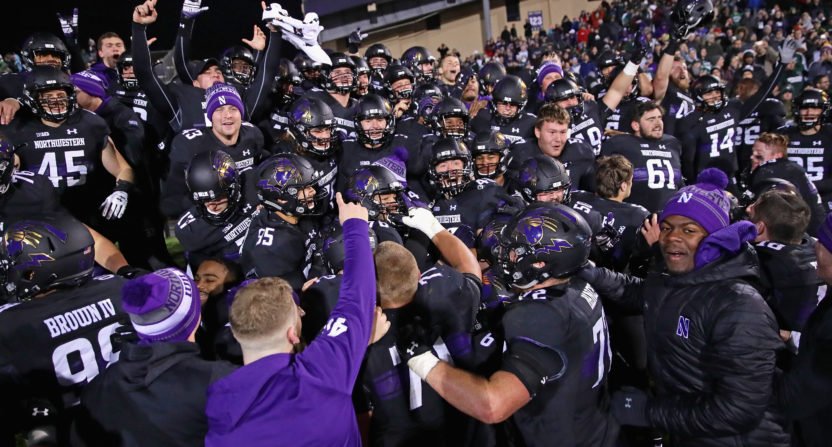 After week two’s blowout loss to Duke, it looked like the Northwestern Wildcats would be falling short of expectations this year. Preseason hype saw them as a fringe contender in the Big Ten West. But a 41-17 defeat at the hands of the Blue Devils didn’t seem to be indicative of that sort of talent level.

Testing Wisconsin a couple weeks later, there still weren’t hints. The Badgers don’t bludgeon lesser teams. They do enough to win and move along.

The Wildcats seemed to hit rock-bottom against Penn State, however. Hosting PSU to start October, Northwestern was trounced 33-7, and fell to 2-3. With games against teams like Michigan State, Iowa, Nebraska and others still on the schedule, bowl eligibility was suddenly getting doubtful.

Northwestern’s now won five straight — including three in overtime — and sits at 7-3 with a pretty strong shot to get to nine wins on the season. As we should’ve known by now, this is just how Coach Pat Fitzgerald does things with the Wildcats.

Last season started even worse than this one. NU was 1-3 after four games, but the Wildcats defense rallied and they finished 7-6 after a Pinstripe Bowl win over Pitt. Conversely, Northwestern rode expectations to a 5-0 start in 2015, only to finish 10-3 with a blowout loss to Tennessee in the Outback Bowl.

The moral: Expectations around Northwestern are usually going to prove you wrong.

But that’s seemingly gone double for 2017, as the team flipped a switch and has been off and running since an Oct. 14 win at Maryland. A 17-10 overtime win over Iowa was a pleasant surprise. Beating Michigan State 39-31 in three overtimes was shocking the next week. Another overtime win followed against Nebraska.

Things settled down in a ho-hum 23-13 triumph over lowly Purdue. But behind what’s become an impressive defense once again, Northwestern is suddenly exactly where expectations originally put them: a rung beneath Big Ten West-leading Wisconsin. If only the team had been able to overcome that nine-point deficit in late September…

Of course, the defense wasn’t really up to the task back then. The Badgers’ hard running style would seem to play right into Northwestern’s strength (they’re a top-20 team against the run), but the game shockingly wasn’t decided in the trenches. Wisconsin ran for just 109 yards but threw for nearly 200 and managed to shut the Wildcats’ offense down completely after the first couple drives. Lesson learned for NU, who has improved on offense since that showing, but still relies heavily on its defense to get the job done — random win over Michigan State aside.

Now with two games left in the regular season and division title dreams dashed via tiebreaker, Northwestern is still play for just its fifth 10-win season ever (and third since Fitzgerald took over at his alma mater). Despite the 7-3 record and the resurgent defense performing at high efficiency rates in three of the last four weeks, the S&P+ sees them ranked just 62nd overall. The next two contests against Minnesota and Illinois sound like matchups they should win, yet with projected single-digit margins, they’re very much in toss-up territory.

That’s what this Northwestern team seems to thrive on, however. Of its seven wins, four have come by 10 or fewer points. The offense can find a way to help the team win even when being incredibly inefficient (see: the Michigan State game). While it’s tough to call the offense “great” this year, there is one place they’ve managed to excel: fourth down.

Fitting in nicely with their living-on-the-edge persona this season, Northwestern has converted 19-of-31 fourth downs so far. Again, it’s not wildly efficient. But it’s the second-most conversions in the country, just one behind Syracuse. It’s also a strategy that’s created more confidence in his players, as the Daily Northwestern learned last month:

“Fitz trusts us to get a first down, and we love that,” junior quarterback Clayton Thorson told the publication. “We love going for it on fourth down. We love the trust he has in us.”

He also clarified that the decisions to go for it have nothing to do with their kicking situation, adding “we’re trying to be aggressive, we’re playing to win.”

Given that kicker Charlie Kuhbander is a respectable 12-of-14 on field goals this year, it makes sense. The approach also mimics what other more aggressive fourth down coaches preach. It’s not about a lack of faith in your kicker. It’s knowing that “(you’re) not going to beat these guys kicking field goals” as Syracuse coach Dino Babers noted a couple weeks ago after failing to convert on fourth down from inside the 5-yard line against Florida State.

Nothing that’s happened this year should really deter Northwestern from continuing to be aggressive now, though. It’s worked through 10 games, and despite the aforementioned offensive inefficiency at times, going for it on fourth helps make up for that struggle to move the ball consistently.

A good defense can take you so far, but leaning on it too heavily can be a danger as well. Fitzgerald seems to get that this year, and that’s why he’s taking more calculated risks.

Given the results — three overtime wins and a spot in the College Football Playoff top 25 right now — it’s working, en route to another improbably successful campaign.