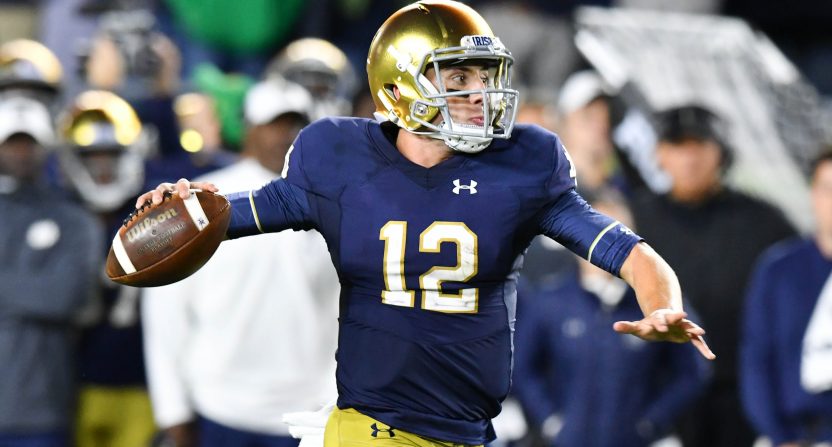 Get ready for some possible College Football Playoff chaos, because the Fighting Irish of Notre Dame are heading into October with a clean 5-0 record and a schedule that looks to be pretty favorable the rest of the way. And with Ian Book igniting the spark for the Irish offense for a second straight week, this Notre Dame team may not fade away in the playoff conversation.

Notre Dame polished its early playoff resume on Saturday night with a 38-17 blowout of No. 7 Stanford, the last remaining undefeated team from the Pac-12.

Everything that makes Notre Dame tick was in the spotlight in the game, with Book leading a resurgent Irish offense and the defense of Notre Dame clamping down on the Cardinal. Preseason Heisman Trophy favorite Bryce Love rushed for 73 yards on 17 carries, with one run going 39 yards for a score (meaning Love had had just 34 yards on 16 other carries). Stanford could only convert three of 13 third-down plays for a first down, and Stanford managed just 229 yards of offense to Notre Dame’s 550.

Book was named Notre Dame’s starting quarterback last week against Wake Forest, and it paid off immediately. But it was fair to wonder if he would be able to thrive as much against a team like Stanford. The answer was a resounding “Yes, absolutely.” Book passed for 278 yards and four touchdowns and he added 47 more rushing yards for good measure. In just two starts, Book has given Notre Dame new life on offense and there may not be many teams standing in the way that will be able to slow them down. And that is why they may begin being hyped as a playoff contender.

Notre Dame will have a big test to confirm or refute that idea next week. The Irish hit the road for a game at Virginia Tech. The Hokies rebounded from their disaster against Old Dominion by smacking Duke on the road on Saturday. Bud Foster and the Virginia Tech defense will have their hands full with this revived Notre Dame offense, but if Book can lead Notre Dame to a road victory next week, it could be playoff or bust.

No game can be taken for granted, of course, but Notre Dame may be favored in each of their remaining games. Winning in Blacksburg isn’t an easy task, but home games against Pittsburgh and Navy could be good draws (even though Pitt has a recent history of taking down a playoff contender or two). A road game at Northwestern could be a tough battle as well, as could a home game against a Syracuse team that just put Clemson on upset alert in Death Valley. And a road game at USC at the end of the regular season? We’ll see how the Trojans look when that game comes around.

But the bottom line is Notre Dame has an excellent chance to remain in the playoff discussion for quite some time now that Book makes them look like a more complete team. Here come the Irish.

On the other hand, Stanford’s loss is a tough blow to the Pac-12 (again helping Notre Dame’s playoff pursuit, perhaps). The Cardinal were the last remaining undefeated team in the conference, which puts the Pac-12 in need of having either Washington or Stanford likely run the table here on out to end the season 12-1. These two teams still have to play each other, so one of them is going to take another hit for sure. Can either team avoid taking another loss elsewhere in conference play? The Pac-12 has had a small margin for error. And with Washington losing to Auburn, Stanford losing to Notre Dame, and a handful of other losses taken around the conference like USC losing to Texas, the Pac-12 may need a bunch of help to get a team in the playoff this year.

The scene was reported as "bizarre," but also understandable.

The scene was reported as "bizarre," but also understandable.