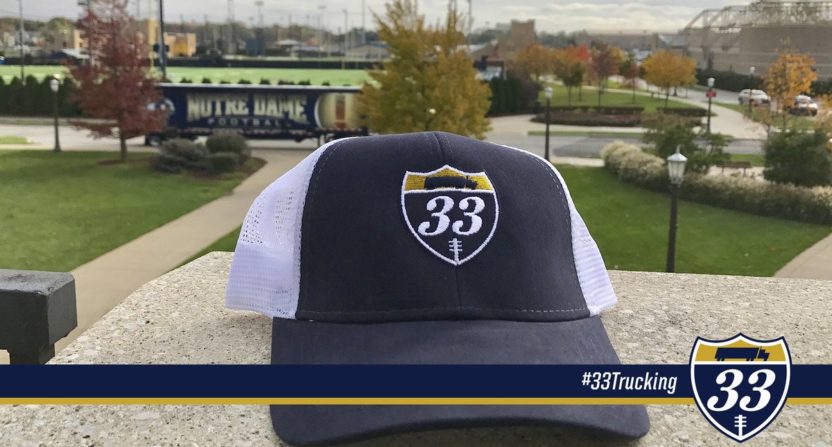 When it comes to selling items that directly tie into student-athletes, universities usually go one of two routes. One way involves a bit of mental gymnastics that implies that $100 football jersey in the bookstore that just so happens to have the same number as our star player isn’t actually him, we promise. The other way is to simply avoid it at all costs.

Notre Dame seems to be going a very different direction, one that is sure to raise some eyebrows even if it ends up they are on the right side of the NCAA. See, the school seems to think they have a Heisman Trophy candidate in Josh Adams, the running back at the center of their successful rushing attack. They have good reason considering the junior is junior is sixth in the nation, averaging 146.1 yards per game on 8.9 yards per carry while also scoring nine touchdowns. The term #33Trucking has caught fire as Adams, who wears No. 33, leads a powerful offensive charge down the field.

In honor of our blue check ✔️- we decided to give away a hat.

Now, Notre Dame is going to start selling #33Trucking hats, which might set off all kinds of red alerts at NCAA headquarters. However, the Irish’s plan to assuage concerns is by setting aside “all of the proceeds benefitting current and future Fighting Irish student-athletes.”

Does that mean Notre Dame players will get a check from the profits of the hats? No, it doesn’t. Instead, proceeds from hat sales will enter the Student Assistance Fund, which provides benefits to student-athletes and their families. The fund is distributed to student-athletes who need financial support and preference is given to those in need.

Hats will cost $26 and will be available for sale across the Notre Dame campus. A special edition hat will be given to students at Notre Dame Stadium on Saturday’s game against Wake Forest.

Ultimately, it’s unlikely Notre Dame would go about this if they thought it might cause a conflict or put their star player’s eligibility in danger. However, it’s yet another example of how, at the end of the day, football players are commodities. Even if the proceeds are going to a fund to help student-athletes, that’s not really fair value given what Josh Adams and his teammates are generating on the football field.