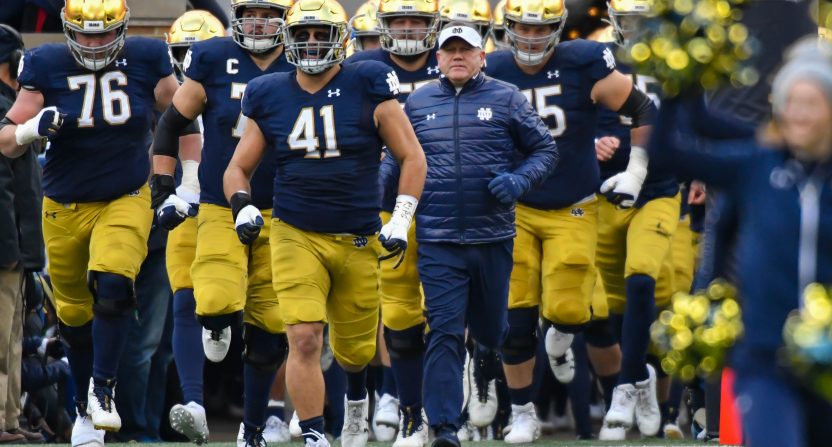 College football scheduling was wilder than usual to begin with this year thanks to some conferences choosing not to play, some going conference-only, and some putting limits on out-of-conference play, and things have continued to get strange into the season thanks to positive tests that have led to postponed or cancelled games. In Week 2, three games involving Big 12 teams went down (including Fox’s planned noon Eastern matchup of Baylor-Louisiana Tech), plus NC State-Virginia Tech, and Week 3 saw Baylor-Houston (also a Fox noon ET matchup) postponed, plus Florida Atlantic-Georgia Southern, Virginia Tech-Virginia, and Charlotte-North Carolina (which was cancelled outright). And in Week 4, it’s another noon ET matchup going down, this time #7 Notre Dame at Wake Forest (which had been scheduled for ABC on September 26). Here’s more on that from ESPN’s Andrea Adelson:

The Notre Dame-Wake Forest football game scheduled for Saturday has been postponed after the Irish announced 13 players are in isolation.

In a statement Tuesday, Notre Dame said seven players tested positive for coronavirus out of 94 tests done Monday. Combined with testing results from last week, 13 players are in isolation, with 10 in quarantine. As a result, Notre Dame has paused all football-related activities. The two schools are working on a date to reschedule the game.

“With student-athlete health and safety our primary focus, we will continue to follow our prevention protocols and ongoing testing procedures,” Notre Dame coach Brian Kelly said in a statement.

As Adelson’s piece notes, this one could possibly be made up next Saturday (October 3), when both teams currently have a bye. But that will require Notre Dame’s numbers to turn around quickly. And this adds to the amount of disruption COVID-19 has already caused to the 2020 CFB season, and the ACC has been hit hard there. In addition to the cancellation of North Carolina’s game against Charlotte, three conference games have already been moved around (NC State-Virginia Tech, Virginia Tech-Virginia, and Duke-Virginia). We’ll see if more follow.

This also presents some scheduling challenges for ESPN and ABC with their featured noon ABC game going down. They do have some options: ESPN’s schedule release from Monday lists eight other games across their networks and digital platforms in that noon Eastern slot, including No. 5 Florida at Ole Miss (ESPN), Georgia Southern at No. 19 Louisiana (ESPN2), Georgia State at Charlotte (ESPNU), No. 23 Kentucky at No. 8 Auburn (SECN), No. 24 Louisville at No. 21 Pittsburgh (ACCN), Georgia Tech-Syracuse (ESPN3), No. 13 UCF at East Carolina (ESPN+), and Campbell at Applachian State (ESPN+).

So it’s quite possible that Florida-Ole Miss takes the ABC slot and many of those other games slide up a slot as a result. It’s also possible that Georgia Tech-Syracuse winds up on ACCN and Louisville-Pittsburgh gets bumped up higher, maybe even to ABC. We’ll see what they decide to do there, and how the announcing assignments change. But this is certainly a loss of a prominent game for ESPN and ABC.

Update: The UCF-East Carolina game is moving to ABC, but will still be streamed on ESPN+: