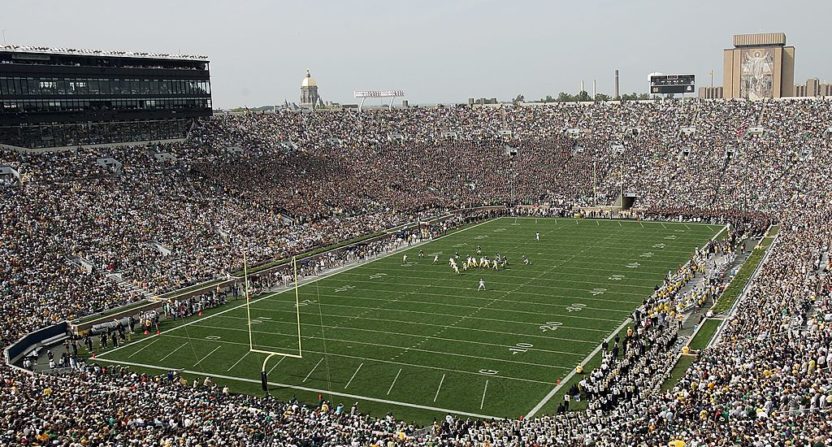 A woman is suing the University of Notre Dame, claiming a football player sexually assaulted her when she was a student at an adjacent college and that the school botched the investigation. School newspaper The Observer first reported on the lawsuit on Wednesday.

The alleged assault took place in January of 2016:

According to the complaint filed in the St. Joseph Circuit Court, the female student — referred to as “Jane Doe” in the lawsuit — is suing for damages on the counts of negligence and invasion of privacy, breach of contract and violation of Title IX on the basis of gender bias.

In January of 2016, Doe agreed to help an intoxicated Notre Dame football player — referred to as “Jack Roe” — return to his dorm room in Alumni Hall, where she was sexually assaulted, according to the lawsuit.

Deadspin combed through the legal filing, and has it available here if you’d like to do the same. It’s not a pleasant read, as you’d expect:

According to the suit, the student (who goes by Jane Doe) was spending the 2015-16 academic year at Notre Dame as part of an exchange program. She says she was escorting a drunk football player (who is also anonymous and is referred to as “Jack Roe”) back to his dorm room, where he sexually assaulted her. Doe says she didn’t want to face her alleged attacker, and that her response was primarily motivated by fear. According to the complaint, Roe smashed her phone as she tried to call for help during the alleged incident.

The student wasn’t technically spending that year at Notre Dame, though; rather, she was a student at neighboring Holy Cross College, taking part in a year-long gateway program that essentially serves as a Notre Dame prep year for students not admitted directly as freshmen. She wasn’t a Notre Dame student at that point, but the schools (along with St. Mary’s College, the school Lizzy Seeberg attended) sit in the same basic geographic location, and intermingling is common for social events.

The Seeberg case is highly relevant, especially considering the student’s reticence to report the assault; fears of retaliation are not unfounded at Notre Dame. That the player was eventually allowed to transfer with a clean record, his new school apparently none the wiser, is also not unheard of. Essentially, this claim is that the school dragged the student into the reporting process just to be able to control the fashion in which the case was handled and, eventually, dismissed, without bringing in troublesome outside authorities like, say, the police.

It’s ugly for Notre Dame and their football program, a program under Brian Kelly that deserves zero benefit of the doubt.