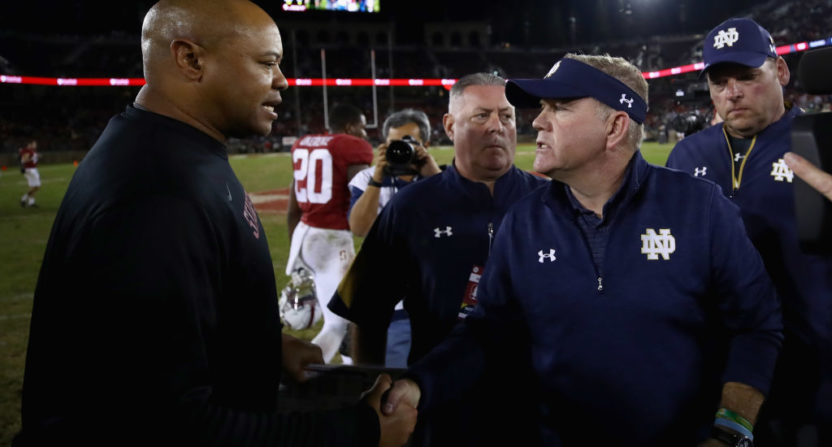 Back in the spring, Notre Dame head coach Brian Kelly was his usual confident self as he looked forward to the 2017 season. During the spring football portion of the year, Kelly went on a media blitz and attempted to provide a positive spin for the Fighting Irish coming off a dreadful 4-8 season the previous fall. With some staff changes in the books and some reworking of the offensive strategy, Kelly had every reason to suggest the 2017 season would be a year of improved play.

It was, without question, but the month of November showed the same familiar hurdles Notre Dame has long suffered through with an inability to thrive when the pressure is on and the national spotlight is placed on them.

Don’t overthink this. Notre Dame going from 4-8 in 2016 to 9-3 in 2017 is a major step forward for the program or any program, and that doesn’t happen simply by accident. The Irish had a handful of close games not go their way last season and this year Kelly’s team managed to have many more games under control.

Notre Dame accumulated a good handful of good wins, even some that didn’t look quite as good at the time, like a 49-20 victory over a Boston College team that went on to be 7-5 or a 38-18 win over a Michigan State team that went on to go 9-3 in their own turnaround season. Even the early home loss to Georgia managed to earn respect for the Irish given Notre Dame was the only team all season outside of Auburn to really challenge the Bulldogs.

But when November came calling, Notre Dame was buried in the spotlight.

A week after holding off Wake Forest in South Bend, the Irish were the No. 3 team in the country with a record of 8-1 as they made their way down to Miami to play a Hurricanes program looking for a statement to definitively proclaim The U was back. It was a total mismatch on November 12, with Miami routing the Irish, 41-8. With two losses to two teams very much in the playoff hunt, the odds were quickly stacked against Notre Dame to be able to make a serious playoff run, although they remained a bleak blip on the playoff radar.

Until Saturday night in Palo Alto.

On the road against No. 21 Stanford to close out the regular season, Notre Dame played a tough and physical game for three quarters, but fell apart in the fourth quarter, and it unraveled quickly. Up 20-17 after kicking a field goal late in the third quarter, the Irish were unable to hold off the Cardinal. Stanford running back and Heisman Trophy candidate Bryce Love highlighted a quick touchdown drive with a 14-yard run with a personal foul penalty tacking on 15 yards and a 10-yard run along the way to help setup a go-ahead touchdown pass from K.J. Costello to Kaden Smith.

Notre Dame’s first play from scrimmage on the ensuing drive resulted in Brandon Wimbush being picked off to setup a quick Stanford touchdown on a short field. Unable to stop the bleeding at this point, Notre Dame then fumbled away the ensuing kickoff and Stanford was once again in business on the Notre Dame side of the field. Cameron Scarlett drove the final nail in the coffin for Notre Dame with a short touchdown run to turn what was a three-point Irish lead into an 18-point deficit all in the span of the first five minutes of the fourth quarter.

There was no coming back from that for Notre Dame. The Irish, for the second time this month, had been outplayed and outcoached in a big spot, a trend that has become all too familiar for Notre Dame fans over the years. With the possibility of wiggling into the playoff seemingly closing as the weekend unfolded (just about every team Notre Dame needed to lose ended up winning), Stanford made it certain the playoffs were not going to be an option for Notre Dame. In doing so, the Cardinal may have knocked Notre Dame a few pegs on the bowl lineup as well.

Notre Dame has a unique partnership with the ACC for football, and that extends to the bowl season as well. But with the Orange Bowl out of the mix (which is likely to be the ACC championship game loser vs. the highest-ranked available team from the SEC or Big Ten), the Irish will fall into the ACC’s tiered bowl games. At 9-3, the Irish are still in position to be one of the first teams chosen for an ACC-affiliated bowl, because they will be selected first after Miami and Clemson are taken and ahead of the next possible teams in the pecking order; Virginia Tech and NC State.

Notre Dame, like a few other teams, will be left wondering what this season could have been if a few things went their way. Unfortunately for the Irish, not enough things could have been changed this season to erase two losses in November by a combined 51 points no matter how much you preached this year would be different.

Notre Dame’s 2017 season was different from the 2016 season, but the pain and suffering still feels the same as it always has in South Bend. Notre Dame remains a good football program, but it remains in need of beefing up to be a true contender when it counts.