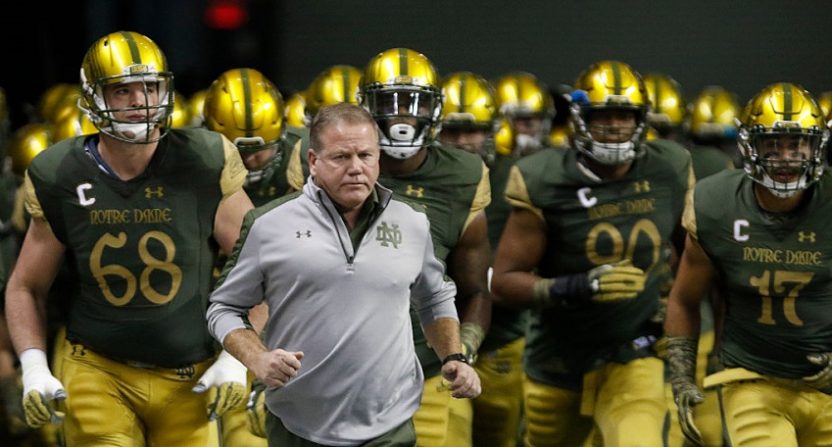 It seems that every so often we have to address one of the few remaining elephants in the room when it comes to college football conference realignment: the status of Notre Dame.

The Golden Domers are always the subject of constant speculation over whether or not they would ever consider breaking with tradition, leaving the independent scene and joining with one of the Power Five conferences. Geographically speaking and traditionally speaking, Notre Dame in the Big Ten makes all the sense in the world. On second thought, given their nationwide status and massive following, they’d make sense for any conference from the Pac 12 to the SEC.

But if there is a conference that would ever win the Notre Dame sweepstakes, it would be the ACC. Notre Dame is a conference member with the ACC in other non-football sports and the football program and the conference have a unique scheduling arrangement. In addition to games with rivals like USC, Stanford, Michigan State and others, Notre Dame now plays at least four games a season versus ACC competition.

Predictably, with that level of commitment to the ACC, it’s no surprise that there would be constant periods of rumor and speculation over when Notre Dame would go all the way and make it Facebook official that they’re in a relationship with the conference. We’re in one of those periods right now with Tim Brando of Fox Sports (who is widely connected in ACC circles) saying that the school and the conference are in conversations about full football membership.

.@TimBrando #NotreDame: conversations have taken place about potentially joining the #ACC for football.

These conversations have probably been ongoing for years now and they’ll continue to go on for years. A couple things make it relevant for now, though.

First is the ACC’s rise in the conference power rankings. Clemson just won a national championship this year playing in the ACC and Florida State won one a couple years ago. Lamar Jackson just won the Heisman Trophy while playing at Louisville. One can make the argument that the conference has never been better positioned as a power player on the national stage, at least for several years. With the ACC on the rise, now would be as good of a time as ever for Notre Dame to come into the conference and add to its strength. Sure, the ACC might be a little top-heavy with programs like Boston College and Wake Forest among the weakest power five schools, but Notre Dame could find some pretty good competition from week to week playing in the ACC. You haven’t always been able to say that.

Notre Dame joining the ACC could have been easily seen as a step down for most of its existence. However, with the Fighting Irish coming off of a 4-8 season, maybe joining the ACC would be a good thing for the program.

The second factor is the new ACC Network that is coming from ESPN. The ACC has been behind the other major conferences (outside the Big 12 at least) by not having a conference network. That changes in just a couple years time when the ACC Network launches. And in spite of ESPN’s significant layoffs and severe budget restraints, it is still coming. The network could bring an additional $15 million to member institutions annually. ACC schools are profiting, but Notre Dame receives a limited share thanks to their football independence. Here’s the best breakdown of those revenues via the Virginia Daily Press:

That ratio is reflected in the ACC’s most recent tax return, for fiscal 2014-15.

The conference distributed $373,162,899 to its 15 schools, about 55 percent of which came from television rights fees. So Notre Dame received $6.2 million, less than one-fourth of the $26.21 million the league’s other members pocketed, on average.

Now here’s what might surprise you: the Fighting Irish only get $15 million annually from NBC, thanks to their super-exclusive football package. That means that the Fighting Irish are actually making less money in television rights as an independent than they would from being in a conference. That fact would probably come as a huge shock to everyday college football fans who assume Notre Dame is printing their own money thanks to the NBC deal, but it does show how lucrative conference networks can be. (Hello, Jim Delany and his $20 million bonus!)

Furthermore, you can imagine that an ACC Network with Notre Dame football would make even more money for the Irish and all of the other member institutions than whatever current projections are without them.

As much as Notre Dame’s independence seems like it’s set in stone forever, now may be the right time for the Irish to finally go all in with the ACC. It makes sense from a competitive standpoint on the field and it certainly makes sense from a financial standpoint off the field. Is that enough to overturn decades and decades of history? Everyone else in college football would certainly say yes.