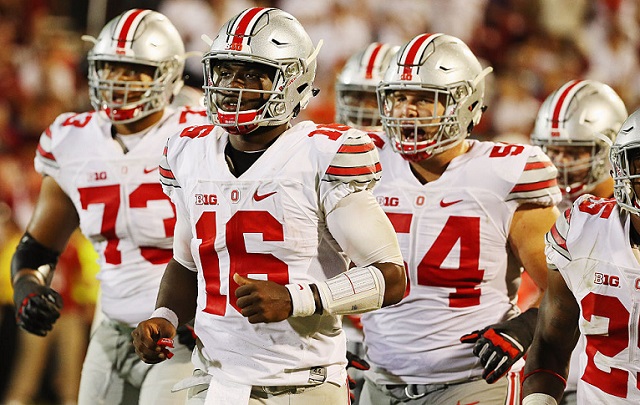 Only two teams remain in The Comeback’s college football Top 50 countdown! Up next in our preseason rankings, we go to a loaded Ohio State team at No. 2.

Ho-hum. It’s Ohio State, coached by one of the greatest coaches of all time, and the Buckeyes are once again expected to be somewhere near the top of the college football mountain. Urban Meyer has recruited his tail off and assembled a star-studded coaching staff to try and double down for another national championship in Columbus.

And there’s reason to think that it might happen. The Buckeyes have experience in key spots, young untapped five-star talent in others, and the coaching to get the most out those players. For a program that is one of only three to get into the College Football playoff at least two out of the first three years, anywhere short of that prize can be viewed as a major disappointment.

Queue up another run towards Big Ten and national championship aspirations for The Ohio State Buckeyes.

The 2016 season was supposed to be a rebuilding year for Ohio State, if such a thing exists these days on the banks of the Olentangy. The Buckeyes were the youngest team in all of the Football Bowl Subdivision, but someone forgot to tell the players.

Ohio State showed everyone it was for real when a lot of young kids boarded a plane and left for Norman to take on a very dangerous Sooners squad. What followed was a clinic on the road, and an announcement to everyone that expectations don’t change at a program like Ohio State. OSU won, 45-24, to open the season 3-0 and pointed down a path to special things.

The Buckeyes cruised through the next three games. Included in that stretch was an overtime win in Madison over a talented Wisconsin team. Then it was off to Happy Valley to take on a somewhat reeling Penn State squad. There, amidst a jazzed and hungry crowd, and thanks in large part to some big plays by the Nittany Lions special teams, Ohio State suffered its first and only loss in the regular season, 24-21.

Of course, we can’t forget to mention the epic double-overtime battle in The Game on November 26, where OSU laid waste to its Darth Vader for the fifth-straight time. And we certainly can’t leave out the very, very sour appearance in the College Football Playoff where it got absolutely taken to the cleaners by Clemson 31-0 to end the season in disappointment.

Ohio State pulled in another whale of a class, one stocked full of four and five-star recruits — again. It was just another killer haul in a string of them that only Alabama can measure up to. It was also tops in the Big Ten for yet another year. Not to discount the four-star players, but with a class this talented, it all begins at the five-star level where OSU signed five total.

The headline players include DE Chase Young (7th nationally), CB Jeffrey Okudah (8), LB Baron Browning (11), CB Shaun Wade (17), and OG Wyatt Davis (24). If you’re counting, that’s five of the top 25 players in the entire country, according to 247 Sports. And that’s before we even get to national Gatorade Player of the Year, quarterback Tate Martell.

Simply put, the 2017 recruiting class is absolutely loaded and there’s no doubt some will have an immediate impact this year.

61.5% – The completion percentage for J.T. Barrett in 2016. It’s not an absolutely horrible stat, but one that has regressed now three straight years. For all the good that Barrett brings to the OSU offense, he’s yet to capture the magic of his freshman season. Some of that is on the receivers, some of it on the line, and some of it on No. 16 being too careful with the ball. He needs to play more free and loose in 2017 for the OSU offense to really rock.

15.5 –The points per game the OSU defense surrendered on average. There were only two defenses better — Alabama and Michigan. That’s extremely solid for a defense still learning on the fly, and there are plenty of studs back to try and continue the defensive culture Greg Schiano has set in Columbus. There has been an emphasis on running a quicker tempo on offense in the offseason, but the Buckeyes will need the defense to be in concert, just as it has been over the last few years.

7 – The amount of touchdowns the defense scored in 2016. In a consistent trend, only Alabama was better. Not only did the defense to a fantastic job of stonewalling opponents, it also had a penchant for taking it away and going the other way for points. It’ll be hard to duplicate that type of effort, but if so, those types of moments are game changers.

Why it matters: This will be a major early hurdle to clear if Ohio State is going to make another trip to the College Football Playoff — that’s the goal. If not for the result of the game last year, OSU is likely on the outside looking in, and the Sooners are probably headed to the Fiesta Bowl. Not only will Oklahoma bring in a lot of offense, but it’ll be two preseason Heisman favorites dueling it out. There could be implications for both J.T. Barrett and Baker Mayfield when all the votes are tabulated later in the year.

Why it matters: These two might be the two most talented teams in the league, and we all know what happened last year. You can bet that Ohio State will be looking for revenge, while Penn State will be out to show that it wasn’t just a one-year wonder.With  J.T. Barrett, Saquon Barkley, Trace McSorley, and Mike Weber, the stars will be out in the skill positions, but we all know this one will be won at the point of attack on both sides of the lines. It could be for the Big Ten championship when all is said and done.

Why it matters: Why wouldn’t it? It’s The Game, the greatest rivalry in college athletics and perhaps all of sports. Michigan is looking to make wholesale personnel changes this year, but Mr. Khakis has tons of young talent ready to try and get him his first victory in the series as a head coach. It’ll likely be a gray, cold, and blustery day, and have Big Ten and national implications as it most always does.

J.T. Barrett, QB – Yeah he’s a leader of leaders. Sure, he has the heart of a champion. You bet he has rewritten a lot of Big Ten passing records with more to fall this year. But something has been lacking with Barrett over the last couple of seasons. He’s not throwing the ball down the field, and not giving his receivers chances to make plays.

All indications are that he’s been full-go on that front in fall camp, but it has to carry through when the lights are on. Ohio State needs Barrett to be accurate, confident, and have more of a risk/reward mindset than what we’ve seen in 2015 and ’16.

Fourth-year juniors Terry McLaurin and Parris Campbell are stepping up as leaders at WR and changing the culture.https://t.co/tAQwiGWASR

Parris Campbell, WR – Hybrid back Curtis Samuel is gone to the NFL and he leaves some big shoes to fill. The next man up is the 6-foot-1, 208-pound junior out of Akron. He’s been impressing in fall drills and looks poised for a big year, but has yet to put it all together. When things broke down last year, the hybrid position was the difference maker, and maybe all Campbell needs is the vote of confidence that comes with being the guy.

Chris Worley, LB – Worley comes with all the measurables and skills to be a lights-out linebacker. Instead of patrolling the outside this year though, he is moving inside to make up for the loss of OSU’s leading tackler the last two seasons, Raekwon McMillan.

At 6-foot-2, 230 pounds, Worley is more in the mold of the new hybrid backer that can roam sideline to sideline, while also having the ability to drop in pass coverage. But don’t for one minute question his ability to stick his nose in on the pile to make key stops in traffic. His ability to learn the inside and quarterback the defense will be huge on that side of the ball in 2017.

Ohio State will once again make the College Football Playoff. The way things have gone, this isn’t that bold of a prediction, but things are there again to make another run. The Buckeyes have a four-year Heisman-type guy at quarterback, perhaps the best defensive-line in the country, and a pretty good coaching staff, to say the least. There are hurdles to clear as there always are, but Ohio State will be the most talented team on the field every game it plays — until perhaps it gets to the postseason.

The number of Buckeyes fans that don’t know how good Mike Weber is kind of shocks me.

Mike Weber will lead the Big Ten in rushing. All the hype is surrounding Saquon Barkley in Happy Valley, but don’t sleep on Weber. At times, he looked a little tentative picking a hole last year, but the offensive line should be much improved with four returning starters. As long as the passing game shows up more consistently, Weber will get ample opportunity to run against defenses that will have to cross their heart against a QB that can run and a passing game that is a threat. He should get a bushel of yards in 2017.

OSU will win the Big Ten. As good as Ohio State has been, it has lost out on the Big Ten Championship game the last two seasons via tiebreakers. The Buckeyes have won or shared the East division five-straight years now, but only have two appearances in Indy to show for it, and only one Big Ten title. That’ll change this year. They get Penn State and Michigan State at home, and Michigan is in a bit of an unknown spot with losing ten starters on defense.