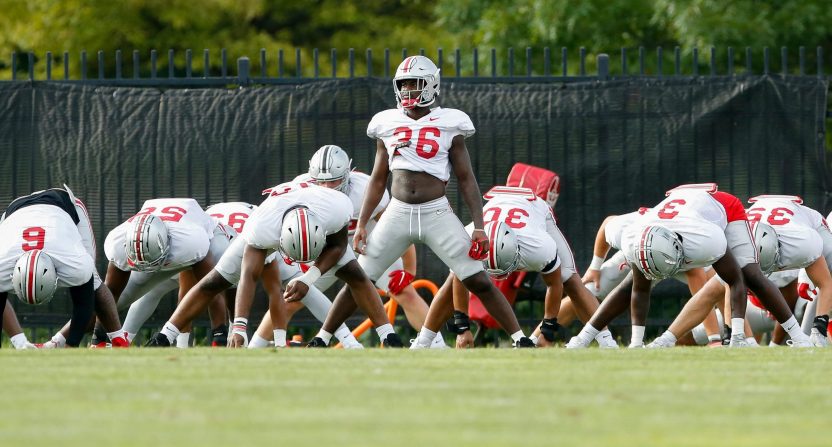 The Ohio State Buckeyes easily defeated the Akron Zips 59-7 on Saturday, but the real fireworks seem to come right before halftime when linebacker K’Vaughan Pope apparently up and quit the team.

As first noted by Austin Ward of Lettermen Row, Pope tried to sub himself in for a play but was waved off by linebacker Teradja Mitchell. Pope then threw his gloves in the crowd, took off his jersey, and walked towards the tunnel. Bill Landis of The Athletic added that Pope had hated exchanges with head coach Ryan Day and linebackers coach Al Washington, before being “seemingly told to leave the sideline by general manager for football operations Brian Voltolini.”

Once in the locker room, Pope fired off a since-deleted tweet that read “f*** Ohio State.” He later tweeted “good lucc to my teammates” in what certainly feels like a goodbye.

After the game, Day was asked about Pope and what the situation was. Given that he had just recently left the field and was more focused on the game outcome than what Pope was tweeting, he needed to catch up.

“Yeah, so, someone just kind of told me — I guess there was a tweet or something,” Day said. “I’m going to kind of get the details of everything that happened before I say anything there.”

Day was asked a follow-up question about the current state of the linebacker position now that it seemed like they were about to lose Pope a week after Dallas Grant entered the transfer portal. His answer seemed to indirectly comment on the Pope situation.

“Well, in today’s day and age, guys can leave four games because they can redshirt,” Day said. “And if they want to go enter the portal, that’s their prerogative. And, you know, I have a hard time with that — because, I think, you know, when you make a commitment to a team at the beginning of the year, you make a commitment to Ohio State and the Buckeyes that that’s what you do.

“One of the hard things is that you have to play certain guys. And you have to make some decisions on who’s playing in those games. And you just really count on the guys to still be great teammates if they’re not getting on the field.”

Presumably, we’ll find out more about Pope’s status with the Ohio State football team in the next day or so. It doesn’t sound like the door is closed just yet but there are clearly some issues going on right now with the Buckeyes behind the scenes.

UPDATE: Ohio State has dismissed Pope from the program, though his scholarship will remain in place for the rest of the semester.