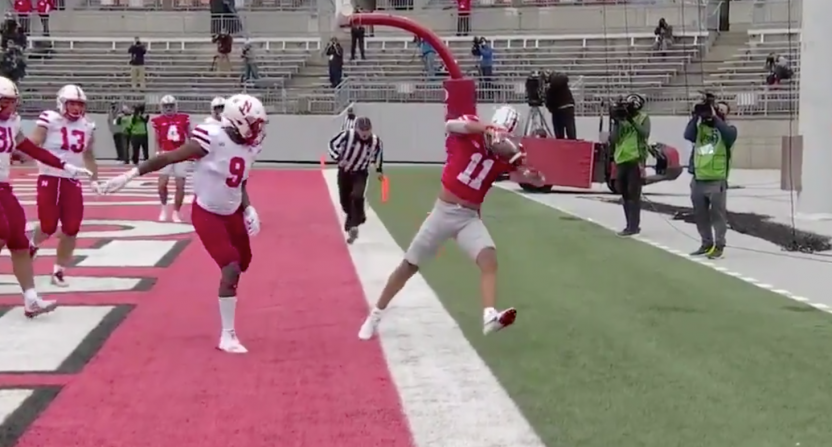 The Ohio State Buckeyes opened the 2020 season in impressive fashion by pulling away from the Nebraska Cornhuskers in the second half on Saturday.

Justin Fields turned in an efficient afternoon a day after Wisconsin freshman Graham Mertz stole the show in Madison. Among the targets Fields had to work with on Saturday included freshman Jaxon Smith-Njigba. Playing in the first game of his collegiate career, Smith-Njigba put the Big Ten and college football world on notice with a display of excellent coordination skills on just his second career reception.

Smith-Njigba caught a pass at the back of the end zone for what was originally ruled an incomplete pass. However, upon closer inspection from the video replay, it was ruled the talented freshman not only caught the pass but somehow had the awareness to get his right foot tapped just inside the end zone prior to stepping out of bounds.

The @OhioStateFB Freshman WR comes up with a big TD for the Buckeyes! pic.twitter.com/2pnGD86fVR

Ohio State has had a solid run of top-tier wide receiver play in recent years. And seeing a young player like Smith-Njigba show this potential early on is important for the Buckeyes. Earlier in the game, Ohio State’s top returning receiver Chris Olave left the game after taking a blow to the head.

After originally committing to the Buckeyes back in November of 2018, Ohio State fans have waited a while to finally see Smith-Njigba in action. And although the box score won’t necessarily blow anyone away with his first game’s stats, the highlight of the day in the early slate of the college football schedule will certainly have Buckeye fans feeling great about the OSU offense.

For what it’s worth, Smith-Njigba has been making these types of highlight plays since high school.

Next up for the Buckeyes will be one of the biggest challenges they will face this season. Next week, Ohio State visits Penn State. The play of the wide receiver position has been one of the advantages the Buckeyes have had in recent years against the Nittany Lions. Don’t be surprised if that theme continues with talent like this to work with.