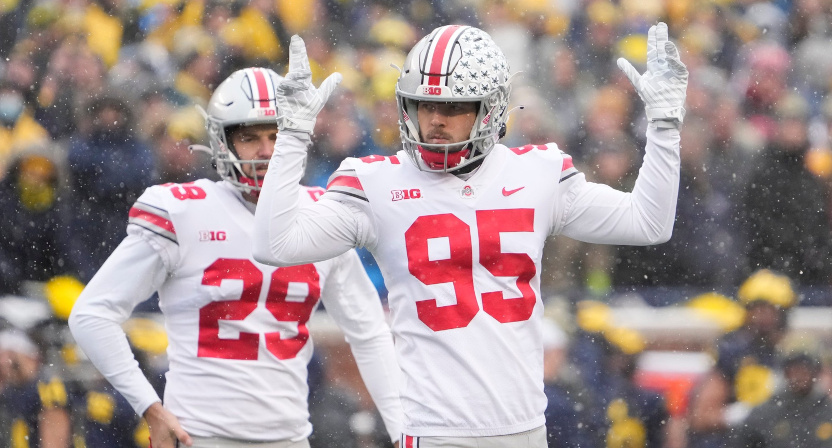 Football games with lopsided scores sometimes spark debates about how teams play late in those contests, and that was certainly the case with the Ohio State Buckeyes‘ 49-10 home win over the Rutgers Scarlet Knights Saturday. One particularly controversial play there came late in the fourth quarter, with Ohio State already up 49-10; the Buckeyes set up to punt, but punter Jesse Mirco saw space in front of him, ran for a first down, and ran out of bounds, where Rutgers’ safety Aron Cruickshank hit him anyway. That set up a scuffle between the teams, and led to penalties for head coaches Ryan Day and Greg Schiano (who previously worked together as assistants under Urban Meyer at Ohio State), plus an ejection for Cruickshank:

Rutgers/Ohio State players and coaches had to be separated on the field after this late hit. pic.twitter.com/NPZ0lN3lcy

Things are getting heated in Columbus 👀 pic.twitter.com/1ogLILcOKX

A lot of the sports world weighed in with criticism on that whole situation. And while some of it focused on the coaches, or the late hit, a good portion of it was about the fake punt. But one particular tweet there, from Barstool Sports, led to a notable reaction Sunday from Ohio State kicker Noah Ruggles (#95 above, seen celebrating a field goal last Nov. 27 with Mirco, his holder). Ruggles (who’s in his sixth year of college football, following four at North Carolina and one at Ohio State) said this wasn’t a called fake punt, but rather a reaction to Rutgers trying for a punt block by overloading rushers to one side, which led to Mirco reacting and running for the first down:

Rutgers sent the punt block team all out overloading one side in the 4th quarter down 39! We ain’t call no fake! Boy saw the open field & put it in turbo🤣. Sorry boutit my boy gonna expose ya if you let him🤷🏼‍♂️🤷🏼‍♂️🤷🏼‍♂️ @Jesse_Mirco29 https://t.co/niyavj4y3B

While there’s little consensus in general over how teams should handle late and lopsided situations, Ruggles at least makes some valid points defending what Ohio State did here. For one thing, there were almost 10 minutes still left on the clock, so the Buckeyes had to keep playing in some way. If they’d opted to straight go for it on fourth and two up 39, that would have drawn all sorts of criticism itself.

And there is a difference between a called fake and a fake in reaction to what the other team does. There’s at least an argument that Mirco’s running here was safer for him (and the team) than trying to punt with that overloaded rush coming at him. The video shows that one Rutgers’ rusher gets through, and would have had a shot at blocking the punt, which can lead to injuries in its own right. The only potential injury from how this worked out came from Cruickshank hitting Mirco after he ran out of bounds.

There’s never going to be agreement on exactly how teams should behave with a big lead, and each situation can be slightly different. Even this situation would have been notably different if that was a fully pre-planned fake instead of a response to the attempted block. But even with that, there are still going to be those who don’t agree with Mirco running instead of trying to get the punt off anyway. But it’s notable to see Ruggles push back in defense of his teammate, and to see him spell out that this wasn’t a pre-called fake.

[Noah Ruggles on Twitter; photo from The Columbus Dispatch, via USA Today Sports]