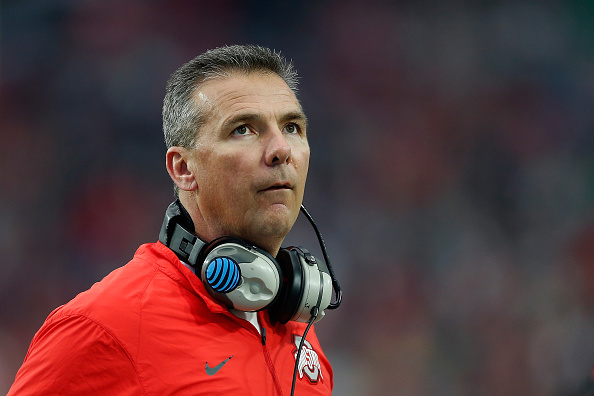 For the second time in their last three games, the Ohio State Buckeyes were ineffective (and that’s putting it nicely) on offense. In the College Football Playoff last season, Ohio State was embarrassed by Clemson. The offense could do nothing at all.

Against Oklahoma on Saturday night, it wasn’t quite that bad, but it wasn’t pretty either in the Buckeyes’ 31-16 loss.

I don’t want to go into too much of a breakdown of all the offensive issues, but it’s clear that something needs to change in Columbus. Whether the blame is laid on J.T. Barrett’s shoulders, Urban Meyer’s, or the receivers’, it’s clear that Ohio State can’t move the ball down the field.

This tweet says it all about the Buckeyes’ recent passing game (the tweet is from Saturday’s second half; Barrett finished with 183 yards vs Oklahoma):

Ohio State just cannot continue on this same path. Barrett could not make throws down the field. Whether that’s on him or someone else is up for the coaching staff to decide. We heard a lot of offseason talk from Urban Meyer and Ohio State writers about how the loss to Clemson taught him that the status quo was unsustainable. There was a ton of hype around Columbus about incoming offensive coordinator Kevin Wilson. He did great things at Indiana, producing tremendous passing attacks.

But, against a quality team on Saturday night, what we saw was more of the status quo. Even more so, we saw Oklahoma play Ohio State last year. The Buckeyes could move the ball. Ohio State got the ball downfield. The running game was consistent. 12 months later, it was all different for Ohio State’s offense. The offensive regression was noted throughout last year, and it came to a head against Clemson. Urban Meyer promised something different this season. But against Oklahoma, it was more of the same.

The issues with the offense shouldn’t overshadow the question marks that should be rising on defense. This defensive line, compared to an NFL defensive line in the offseason, did not get significant push against Oklahoma’s line. I’m not talking about sacks –it’s impossible to expect to sack Baker Mayfield– but the Oklahoma run game gashed this Buckeyes defense at times also.

The secondary, which showed cracks in the first half against Indiana, couldn’t stop Oklahoma through the air. The Sooners had four drives into Ohio State territory in the first half, but they only came out of it with three points. Two fumbles, a missed field goal, and a failed fourth-down conversion early were what kept this game from being a major blowout.

Urban Meyer, who still has an absurd 62-7 record at Ohio State, now has a ton of questions to answer. This is his second embarrassing loss in three games, and it was very lucky to not be even more embarrassing. Something needs to change on offense, whether it’s scheme, play-calling, or — and a lot of people are leaning this way now — who takes the snaps.

Meyer has earned a ton of respect and credibility at Ohio State. He recruits the best athletes in the country. But Buckeye fans won’t stand for it very long if the team still looks this way when it faces Penn State in late October, or when the Buckeyes visit Michigan at the end of November.