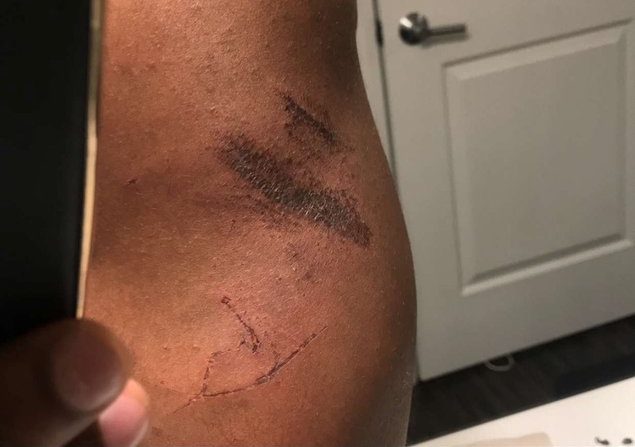 This past weekend’s Ohio State – Michigan game continued the dominance that the Buckeyes have had in this rivalry in recent years. Their 31-20 victory in Michigan Stadium was impressive but all the more so because quarterback J.T. Barrett was forced to leave the game early due to an injury sustained before kickoff when a cameraman collided with him. After the game, head coach Urban Meyer was fuming, saying he planned on finding out who the person was and why it happened. He also voiced his concern with the number of non-football people crowding the sidelines.

“Well, I’m just so upset with myself. That was a non-football injury, too many damn people on the sideline. And a guy with a camera hit his knee. I’m going to find out who and think about that. I’m so angry right now, I’ve got to move on, that I let that happen.”

Barrett also explained after the game how the injury occurred.

“Michigan had a lot of people on our sideline, whether it be fans or photo camera people. He bumped into me, and my knee kind of shifted in. It’s happened before where my knee’s twisted on me, and I have to hyperextend it so it would lock out and it’d just be untwisted.”

If Meyer was pissed off before about the situation, we can only imagine when he found out that one of his running backs got dinged up as well.

Redshirt sophomore Mike Weber, who ran for 57 yards and a touchdown in OSU’s big win, posted a Snapchat photo on Sunday that showed an arm abrasion he claims was caused by a cameraman on the sidelines.

Apparently Mike Weber was also dinged up by a camera guy on Saturday in Ann Arbor. Was told this happened during the game.

Michigan’s sideline situation is without question the tightest/most uncomfortable of any B1G stadiums I’ve worked in. pic.twitter.com/mZoZRvS8FH

Fool me once, shame on me. Fool me twice, shame on you. And that’s the situation that Michigan Stadium now finds itself in when it comes to the sidelines situation. While the injuries appear to be accidental in nature, the fact that it happened more than once, and potentially affected the outcome of the game, means that an investigation or assessment into the number of people allowed to roam freely amongst the players and coaches needs to be up for review. The number of potential TV and film crews who were there Saturday (Fox, Big Ten Network, Amazon, The Journey documentary), not to mention all of the national photographers and crews on hand for this rivalry game, means that it might be impossible to tell who it was, but also underscores the need to take a step back and wonder if player injury is worth the bonus coverage.

Michael McCann at Sports Illustrated has documented the potential for legal action, especially considering Barrett has NFL aspirations and any injury could jeopardize his draft status or worthiness in the eyes of scouts or team executives, let alone ruin his career. Perhaps that’s overthinking the situation, especially considering Barrett has said he didn’t think it was intentional, but the potential for worse injuries or situations clearly exist given what we know now.

TV cameras are a necessary part of the college football experience (especially since TV contracts pay the bills), but if Michigan Stadium or the TV crews don’t take steps to avoid future injuries like these, someone else will need to step in on behalf of the players.