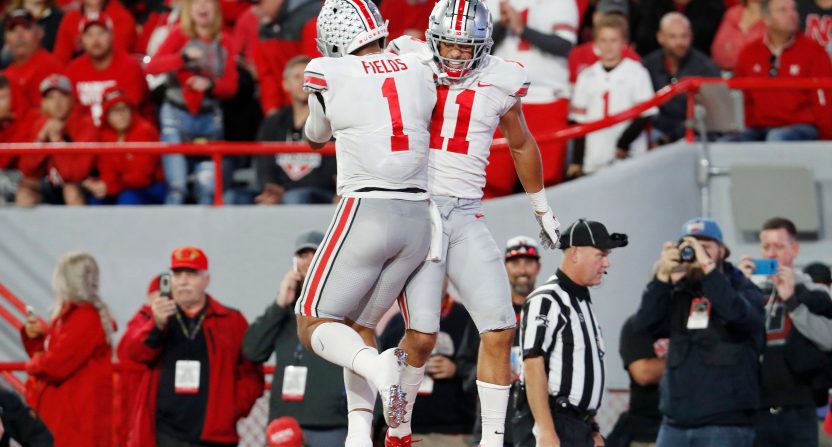 The college football spotlight was shining on Lincoln, Nebraska on Saturday. ESPN set up shop for College GameDay. The tale for a once-proud college football institution working their way back to national prominence got a chance to be profiled, as Scott Frost continues to work through his second season after coming home to Nebraska. Although Nebraska already lost one game this season, the energy was high for a Saturday night primetime matchup with the best the Big Ten has to offer. It didn’t take long for all the hopes of Nebraska fans to be deflated just like many balloons that were locked away until the second half probably ended up.

And it was on full display from the start of the game against a Nebraska program that is clearly many rungs on the ladder below the Buckeyes. Ohio State’s 48-7 victory over the Huskers wasn’t just a show of how far these two programs are from each other. It was an exhibition that showed just how well-rounded Ohio State is. As Kirk Herbstreit mentioned at one point during the bloodbath, this may be one of the best all-around teams that fans of the Buckeyes have seen since the Troy Smith won the Heisman Trophy.

This team may be even better though, because the time Urban Meyer spent recruiting improved the overall athleticism and speed of the roster in multiple positions. Ryan Day’s first recruiting class may have lagged comparatively in the overall team rankings, but he also didn’t pull in as big of a class. Even though Nebraska hasn’t fared poorly in the recruiting rankings over the last four to five years, Ohio State has just been playing on a different playing field, and the results show on the field.

Ohio State more than doubled the offensive production of Nebraska (580-231). The Buckeyes were +3 in the turnover department for the night. They allowed just a single touchdown after already building a 48-0 lead. If they wanted, the Buckeyes easily could’ve pushed for more points on the scoreboard, but Day started to keep things a bit more simple and time-consuming in the second half, and they ran the final six minutes of the clock off with basic runs. There was nothing left to prove. Ohio State spoiled the big night for the Nebraska faithful, and move on to the next test on their quest to a berth in the Big Ten championship game and College Football Playoff.

So, what stands in Ohio State’s way?

Ohio State’s next two opponents are Michigan State and Northwestern. A matchup with the Spartans can be a stingy one, but this Michigan State offense may not be ready for a track meet. And this Northwestern team may be thinking about revenge from last year’s Big Ten championship game, but they may be on to their third-string quarterback when Ohio State makes the trip to Evanston in two weeks and Buckeyes fans take over Ryan Field.

All eyes are rightfully squared on a home game against Wisconsin. The Badgers dominated Michigan last week to make a bit of a statement, and their defense scored twice to help make up for a lacking offensive output against Northwestern. But we could just as easily see similar results when the Badgers step foot in Ohio Stadium. Wisconsin is on more stable ground than Nebraska right now, but once the Buckeyes shut down Jonathan Taylor, will the Badgers have anything else to give?

If not Wisconsin, it may be up to Penn State or Michigan in the final two games of the regular season (and what a way for Ohio State to end the season). Penn State is showing shades of a team that may be capable of giving Ohio State a decent battle but they still have some room to grow and will have their own challenges ahead of them before a road trip across the border. And Michigan, well, we know the deal there too.

If you thought maybe this was the year Ohio State wasn’t the team to beat, which became a trendy opinion for some in the preseason hype machines, think again. The Big Ten is Ohio State’s to lose.