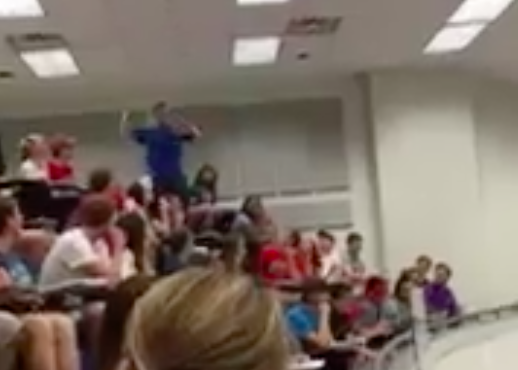 One Ohio State chemistry student is ready for football season to start and could give J.T. Barrett a run for his money with this arm. His ball toss from the balcony earned his fellow college students an A on their first quiz.

The video has amazingly been retweeted almost 50,000 times.

S/o to Benny for making this shot and getting the entire lecture an automatic 100 on our first ochem quiz pic.twitter.com/nmYJ34DjdM

After seeing such an impressive athletic and academic feat, we at The Comeback decided to reach out to the professor of the class at Ohio State, Dr. Christopher Callam, professor of organic chemistry, to get the story behind the viral video.

“We are using the ball to help understand acid base chemistry to understand proton donors and proton acceptors, Callam said. “The student can then try to make a basket to earn 100% on the first quiz.”

It’s a stunt that would make Dude Perfect jealous. But Callam says it’s happened each of the last two years after ten years of nobody completing the toss in his first semester organic chemistry class. And after last year’s success, he encouraged students to get their phones out in case it could be duplicated.

“The first ten years I did it no one was very close,” Callam said. “The last two years the shots have been epic and have gone in. I just randomly throw the ball up to the balcony and whoever grabs it is the ‘proton acceptor’ or Lewis base and I make the horrible and classic joke that ‘I just made an acid of myself.'”

“When the student made the shot last year no one had a video of it because no one thought it would go in. This year I told them we had to live up to last year making the shot so get your phones out. The student who made it ‘Vinny’ had his named chanted for several minutes after he made it. Not your normal day in Ochem.”

Organic chemistry is not the easiest subject in the world, so earning everyone in your class an A on a quiz is the academic version of winning the Heisman Trophy.