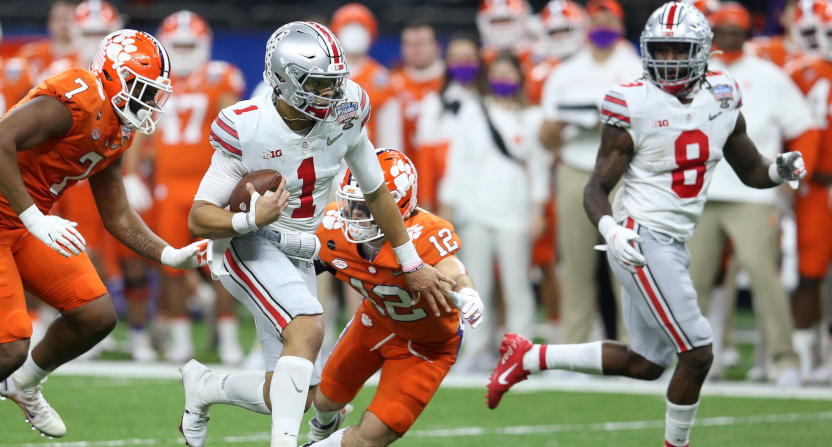 While Friday’s Sugar Bowl started with a Clemson touchdown from Trevor Lawrence and a first quarter that finished 14-14, the second quarter was all Ohio State. The Buckeyes put up 21 points in that frame to none from the Tigers, giving them 28 unanswered points over all and giving them a 35-14 lead at the half. The key play here might have been a targeting call on Clemson linebacker James Skalski for his hit on Ohio State QB Justin Fields, which came with around six minutes left in the half and the Buckeyes driving up 21-14:

James Skalski was called for targeting and ejected after this hit on Justin Fields. pic.twitter.com/0oqTQCTEDi

That led to Skalski’s ejection and gave Ohio State a first down instead of a fourth and two. And while Fields (seen above carrying the ball) was in obvious pain after that and missed a play, he then came in to throw a nine-yard touchdown pass to running back Trey Sermon:

Fields’ health is still a subject of concern for Ohio State heading into the second half; he received further treatment in the injury tent, and while he did continue (and led a 12-play, 80-yard drive that put the Buckeyes up 35-14), he still looked awfully sore. But that touchdown drive was impressive. Here’s the play that capped it, a 12-yard pass Fields threw to tight end Jeremy Ruckert:

Buckeyes take a 35-14 lead over Clemson at the half #CFBPlayoff pic.twitter.com/dfIapkdp73

And here’s the Buckeyes’ first touchdown of the second quarter, another Fields throw to Ruckert:

Justin Fields delivered to get the Buckeyes six 🔥 pic.twitter.com/c1vJDZyUEh

At the half, Fields had completed 16 of 18 passes (88.9 percent) for 223 yards and four touchdowns. Ohio State had also picked up 171 rushing yards, 50 from Fields (on seven carries, giving him an average of 7.1 yards per carry) and 121 and a touchdown from Sermon (on 17 carries, also an average of 7.1 YPC). Meanwhile, Clemson’s Trevor Lawrence completed 12 of 18 first-half passes (66.7) percent for 152 yards and rushed three times for 15 yards and a touchdown, while the Tigers had 34 rushing yards from other players (including just 14 on six carries from star running back Travis Etienne, albeit with a touchdown). So it was definitely an Ohio State-dominated first half, and that was reflected on the scoreboard.