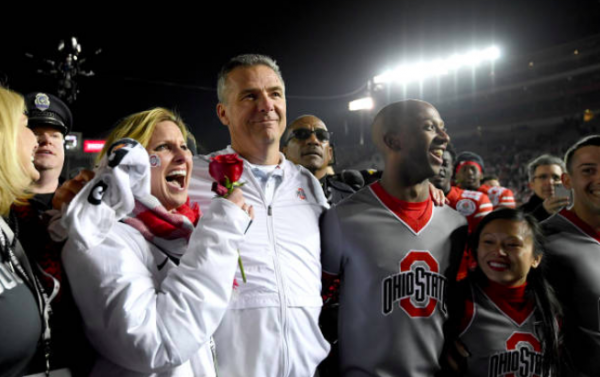 Urban Meyer announced a little less than a month ago that he would end his coaching career after this year’s Rose Bowl. Meyer, who will likely be remembered as one of the greatest coaches of all time, had never before coached in the “Granddaddy of Them All.” He won three national championships (two at Florida, one at Ohio State) in his distinguished tenure, and also coached successful programs at Bowling Green and Utah. Few remember it, but Meyer’s Utah team was the original BCS Buster, back in 2004.

In only 17 seasons as an FBS head coach, Meyer went a ridiculous 186-32 (85.3%). In those 17 years, he won three Fiesta Bowls, two Sugar Bowls, and a Cotton Bowl. He wouldn’t reach the Rose Bowl until his final game, though. Then again, maybe walking off into the Pasadena sunset is the perfect way to end a legendary coaching career. Of course, it’s always better to do that with a win.

Ohio State started the game off strong, striking on a Parris Campbell touchdown reception on its second drive. The first half continued entirely in the Buckeyes’ favor. Ohio State controlled the field position battle, and the defense entirely stifled Washington. The Huskies were unable to sustain anything on the ground or short, and had no way to stretch the field against Ohio State. The Buckeyes added a touchdown to close the second quarter, and they carried a dominant 21-3 lead into the half. When the Buckeyes scored on their first drive of the third quarter, this game looked like it was over.

Washington, however, is coached by the person who is likely to replace Meyer as a widely-respected Top 3 coach in the country (alongside Nick Saban and Dabo Swinney), and Chris Petersen wasn’t going to lose his first Rose Bowl in lopsided fashion. It took until the fourth quarter, but Washington finally turned things around. The Huskies defense started getting stops and forcing three-and-outs against this electric Ohio State offense.

Meanwhile, the Washington offense picked things up in the fourth quarter. Jake Browning managed to complete a few downfield shots, which then opened up the short game. Washington scored a touchdown early in the quarter to cut the lead to 28-10. Two drives later, after forcing two OSU three-and-outs, another touchdown cut it to 28-17. Another two drives later, with time running down, the Huskies added a third touchdown to cut the lead to five points.

The Huskies went for two to cut the lead to three, but Browning was picked off in the end zone. The interception was returned past midfield, but not all the way, which that definitely mattered to everyone who bet on Ohio State -6. Johnnie Dixon covered the onside kick for Ohio State, and the Buckeyes took two knees to close out then game and end Urban Meyer’s career with a 28-23 Rose Bowl win. Dwayne Haskins threw for 251 yards and three touchdowns against a stout defense to win the Rose Bowl MVP. Now the Ohio State star quarterback will have to decide whether to end his Buckeye career (like his coach), or to stay for one final season.

Let’s not forget, this is not the first time that Meyer has retired from coaching. He left Florida almost a decade ago while dealing with a heart condition. He was asked post-game whether he plans on returning to coaching, and seemed firm in his assertion that he was done for real this time. Then again, will a coach of Meyer’s caliber ever be satisfied out of the game? Will being Ohio State’s assistant athletic director be enough for him? Maybe, just maybe, Meyer will feel the itch to coach once again. Meyer is only 54 years old. If he decides in five years that he wants to coach again, there will be plenty of schools happy to take him – and they will offer him plenty for it.