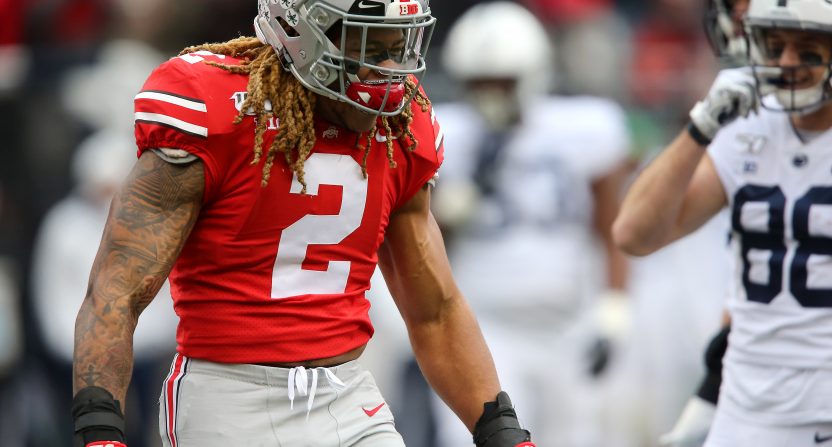 Even when they are not at their best, the Ohio State Buckeyes are still fully equipped to slam the door shut on the best opponents they may face. Saturday afternoon was another example of how Ohio State’s talent, depth, and coaching make the Buckeyes arguably the best team in the country. Although No. 2 Ohio State may not have covered the spread, a 28-17 victory against the No. 8 Penn State Nittany Lions to clinch the Big Ten East Division championship showed the Buckeyes can handle a dose of adversity.

As with any good win, it all starts with the game plan. And Ryan Day and his staff were prepared. After watching Penn State’s pass defense crumble each of the past two weeks in games against Minnesota (a loss) and Indiana (a win), it only made sense for the Buckeyes to allow quarterback Justin Fields to get going through the air and take advantage of a defense that has struggled to cover some of the top passing game weapons in the conference. So, naturally, the Buckeyes strung together a 91-yard touchdown drive on their first possession of the afternoon… entirely on the ground.

Penn State’s run defense had been the biggest strength of the Nittany Lions on that side of the football this season, and Ohio State ran the ball striaght at them from the start, finding lapses in coverage for Fields to take of and working good schemes to get J.K. Dobbins in a rhythm early and often. Ohio State was not afraid and was fully prepared to attack Penn State’s strength right out of the gates, and it resulted in an early 7-0 lead. Talent helps, but having a coaching staff ready to run that game plan when it might have been expected to try take advantage of Penn State’s shaky pass defense was gutsy and smart.

Up 21-0 after taking the opening drive of the second half right down the field for another touchdown, things looked to be going as smoothly as they could for the Buckeyes, an 18.5-point favorite against the top 10 Nittany Lions. But then things got a little bit tense for the packed Ohio Stadium crowd looking to celebrate a division championship that would bring the Buckeyes one big step closer to a return to the College Football Playoff. Penn State finally got on the board with a backup quarterback (Will Levis) coming in to relieve an injured Sean Clifford.

After that, a touchdown run by Journey Brown gave the Nittany Lions some hope. And a quick fumble by Dobbins leading to a quick touchdown by Penn State made things a seven-point game in the third quarter. Fields fumbled on the next drive, his second of the game, and Penn State picked up a field goal to make it a four-point game going into the fourth quarter.

And this is when Ohio State’s best player, Chase Young, really became a factor. Young, who returned to the Buckeyes after sitting out the last two weeks due to a suspension, already had a massive impact on the game in the first three quarters, but he helped Ohio State slam the door shut on Penn State’s upset bid. Young was a big part of how the Buckeyes shut out the Nittany Lions in the fourth quarter.

Just when Penn State was feeling some momentum, Young was there to lead the charge to stop it on more than one occasion in that final quarter. As it worked out, Young was the biggest reason the Buckeyes won. He picked up three sacks to reach 16.5 on the season (an Ohio State record)  and he made his latest case for why he should be the first Buckeye to receive an invite to New York City for the Heisman Trophy presentation this season before his teammates Fields and Dobbins (and Dobbins had a great game aside from his fumble).

On a day when Ohio State was not at their best, they still had the talent to pick up a major win. That’s what great teams do. And the best teams in the country do it against top 10 teams. LSU may have the top ranking in the polls, but Ohio State has an argument as the all-around team going right now.

All that stands in the way of Ohio State and a spot in the College Football Playoff is next week’s road contest against a rejuvenated and inspired Michigan, plus then a clash with either Minnesota or a rematch with Wisconsin in the Big Ten championship game in two weeks. Ohio State could get another bit of adversity next week, but there may not be much standing in the way of these Buckeyes right now until the playoff.