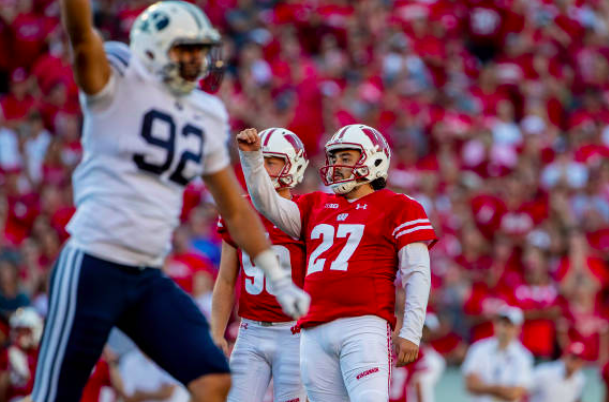 A losing record during a non-conference week is not something you ever expect to see from a power conference. You expect that from the MAC or the Sun Belt. Definitely not the Big Ten. And yet, that’s exactly what the Big Ten did in Week 3.

Let’s go through the seven losses, because a week this bad deserves to be focused on.

The biggest loss for the conference, in the eyes of many, will be this loss by Wisconsin. (There’s another I think is worse, but we’ll get to that later.) The Badgers did not look particularly strong in the trenches against a team it absolutely throttled a year ago. A late field goal miss by the usually-reliable Gaglianone sealed the loss for the Badgers.

So how bad is this loss, exactly? With a non-conference schedule as weak as Wisconsin’s, it definitely hurts. The Badgers have almost no wiggle room left. Even with cross-divisional games against Penn State and Michigan, it’s hard to imagine an 11-2 Wisconsin team making it to the CFP. The Badgers need to be perfect from here on out. Then again, if they don’t play significantly better, a Big Ten title and 11-2 record is probably not in the cards anyway.

This loss, I think, hurts the conference more than the Wisconsin loss. It was definitely worse for Maryland. The Terrapins came into this week looking very strong. They had a good win over Texas and a dominant showing against a weak Bowling Green team. Especially when you consider what Texas did this week (beating USC in dominant fashion), Maryland was looking at a national ranking and some serious attention. The Terrapins definitely looked like the third-best team in the Big Ten East before this week. Instead, Maryland comes away with an embarrassing loss to a Temple team that already has an FCS loss.

I have nothing nice to say, so I’ll say nothing at all.

The Cornhuskers came into this week looking okay. They dropped a tight one last week against a good Colorado team. Troy is a solid team, but you’d expect a team like Nebraska — especially with the hype surrounding Scott Frost — to win this game pretty easily. Instead, the Trojans have their second P5 win in as many seasons, and Scott Frost is still searching for his first win at Nebraska.

Honestly, this loss isn’t bad. The Illini lost this game 47-23 last year, so this shows definite improvement from the struggling program. South Florida might not have Quinton Flowers anymore, but this is still a strong program and team. It’s never a good look when a P5 team comes into a game against a Group of 5 team as an underdog, but given the circumstances this wasn’t a bad loss for Illinois or the Big Ten.

Purdue is, without question, the best 0-3 team in the country this season. Just a few different plays and this team could easily be 3-0. The Boilermakers briefly had a 40-37 lead against Missouri before the go-ahead touchdown was called back. Given how each team had performed coming into the season, Purdue overperformed by keeping it close. Still, this loss hurts (and it really doesn’t help that Purdue faces Boston College next week), and it was a chance for the conference to look good against a decent SEC team. Purdue will also essentially need a miracle to make a bowl. Not a good start, especially considering the high this program ended on last season.

The Northwestern offense was its own worst enemy in this game. It was potent against a poor Akron defense, putting up almost 500 yards and scoring five touchdowns. However, Northwestern also gave up three touchdowns to the Akron defense- two pick-sixes and a fumble recovered in the end zone. This loss is embarrassing for Northwestern, and will hurt both the Wildcats and the Big Ten as the season goes on. This team is still talented enough to win a bunch of Big Ten games. With this loss, though, every conference win by Northwestern just hurts whoever the Wildcats beat.

This isn’t as bad for the conference as some would have you think. The Big Ten still has two serious Playoff contenders. Penn State and Ohio State both look like top teams, and should be in the mix when November comes around. Michigan, Michigan State, and Wisconsin have stumbled, but all three have more than enough talent to turn things around. Iowa looks strong. The conference should still be in the mix for a Playoff spot when everything shakes out, but this week just about kills any chance the Big Ten has of ending the year with more than five ranked teams. It will also now be surprising to see the Big Ten get the only at-large bid to the New Year’s Six this season.

The conference came into this season with very high hopes. 2018 won’t quite be a banner year for the Big Ten, but there’s still plenty of time for it to be successful for most of its teams.