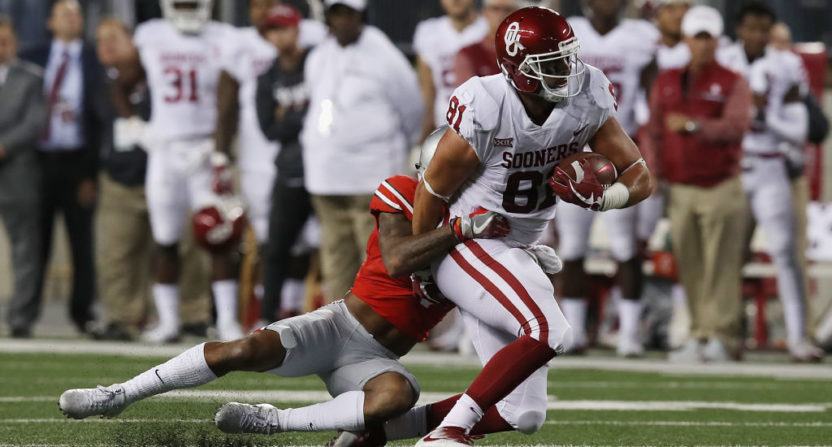 Don’t hit the panic button yet, but it appears the effects of Ohio State’s early entry exodus are showing on the field. Through two games, nobody in FBS has been passed on more than the Buckeyes.

Ohio State has allowed 403 passing yards per game, ranking 130th out of 130. Keep in mind the Buckeyes’ two opponents love to pass the ball regardless of who they are playing, though. Indiana and Oklahoma have finished in the top 30 for passing yards per game each of the last two seasons. And the Hoosiers needed 68 attempts to get their 420 yards in Week 1. When you look at passing yards allowed per attempt, Ohio State ranks No. 97. That’s bad, but at least it’s not the worst.

In recent years, Ohio State has dealt with record-setting numbers of players leaving early for the NFL draft. And the early entrants have weakened their secondary in particular. They had four first-round picks who would still be eligible in OSU’s secondary had they stayed in school:

The trio Urban Meyer lost last year — Lattimore, Hooker and Conley — had a combined 15 interceptions and 141 tackles last season. The team’s passing defense ranked No. 7 in the nation.

That’s a lot of talent to replace in not a lot of time. And Ohio State’s passing offense hasn’t mitigated the defensive struggles so far. With 243.5 yards per game, the Buckeyes rank No. 57 in FBS. That’s raised all sorts of questions about their offense, including if fifth-year senior J.T. Barrett is still the right man to run this offense.

Ohio State’s passing defense has an opportunity to climb out of the cellar in Week 3. Not only does their matchup against Army provide an easy opportunity to bounce back from Saturday’s loss to Oklahoma, but the Black Knights have just 17 passing yards this season. Defending Army’s passing game should be a task even Ohio State’s secondary can handle easily.