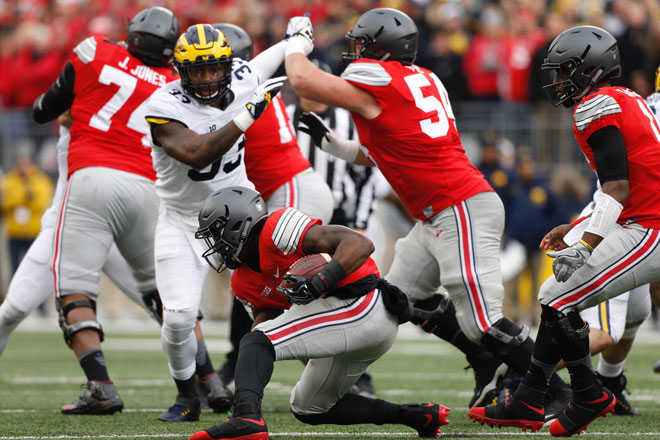 The Game took on increased significance with the winner staying in consideration for inclusion into the College Football Playoff. It what may go down as the best edition of the storied rivalry, Ohio State again found a way to outlast its arch rival.

Not many games live up to the hype. In today’s day and age of 24/7 coverage and everyone trying to take a different angle on mammoth contests, we get inundated with an onslaught of media coverage for days and days leading up to the biggest of big games.

Don’t count the latest edition of The Game as one that fell short of expectations. If anything, it exceeding our wildest desires, even surpassing the 2006 version in which No. 1 Ohio State found a way to outlast No. 2 Michigan 42-39 for a spot in the BCS National Championship.

This game was dripping with drama throughout, and it was really a story of two very separate halves.

In the first 30 minutes, the Michigan defense was dominant. Aside from an opening 72-yard march by Ohio State that ended in a missed field goal, it was an uphill battle both ways in a snow storm for the Buckeye offense to gain any sort of momentum.

The Wolverines dictated play and only surrendered 106 yards of total offense.

On the other sideline, the Michigan offense was able to move the ball but shot itself in the foot far too often, failing to take full advantage of good field position. It had to settle for a field goal early on to take the lead, and then gave up a key pick six to Ohio State’s Malik Hooker to give its arch-rival the lead.

The Wolverines were able to finally wrestle the lead and momentum away just before the end of the half, finishing a 55-yard drive off with a 1-yard TD run by Khalid Hill. Despite dominating the first half of the game, Michigan went to the locker room only up 10-7.

The second half started out with much of the same. The Wolverine defense continued to exert its dominance and seemed to force a punt on Ohio State’s first drive of the second half. And then, what looked like the key play of the game occurred as Buckeye punter Cameron Johnston inexplicably went for a fake from OSU’s own 19 yard line on fourth and seven.

Michigan was ready for it.

The fake punt fails! OSU runs a fake punt deep in their own territory, but Michigan holds! #MICHvsOSU pic.twitter.com/6R89o0WJYC

Michigan quickly took advantage after the turnover on downs, going 22 yards on 5 plays to take what appeared to be a commanding lead 17-7 early on in the third.

With the way the OSU offense had struggled all day, it seemed like game, set, and match.

However, this rivalry was forged on moments that you just can’t see coming around the corner. Michigan QB Wilton Speight threw another key interception when absolutely nothing was going Ohio State’s way. The Buckeyes were able to take it the additional 13 yards to the end zone to set up the finishing drama.

The teams traded blows back and forth for the remainder of the game with OSU FG kicker Tyler Durbin missing his second FG of the game that would have tied it up, only to redeem himself by knocking one through with just one-second remaining in the game to force overtime.

OSU had all of the sudden found its offense under a rock, and it continued in the first OT. It quickly score on just two plays, with the last being a J.T. Barrett 7-yard run.

But there’s no way this game was going to end so easily. Michigan came right back, converting a clutch fourth and goal pass to Amara Darboh from the five yard-line to send it to a second overtime.

This game is awesome. https://t.co/DI1BFbSUEI

Then suddenly, the OSU defense stiffened and held the Maize and Blue to a field goal. The score was 27-24, and the stage was set for OSU hybrid-back Curtis Samuel to be the hero.

On first and ten from the fifteen after a gutsy fourth and one that just did get the spot for a first down, No. 4 took a hand off, turned the corner and weaved his way into the end zone to ruin Michigan’s dreams once again.

It’s yet another bitter defeat for Michigan in the series. When the Wolverines hired Jim Harbaugh, it did so hoping to not only restore the Michigan brand, but to turn the tide in this rivalry. There’s no doubt that the team is much, much more competitive, but Harbaugh has now dropped his first two in the series.

All told, the Wolverines have now lost 12 of the last 13, and five-straight to Ohio State. They’ll try to get it all fixed again next year.

There may have been a loser in this one, but us as football fans are all winners.