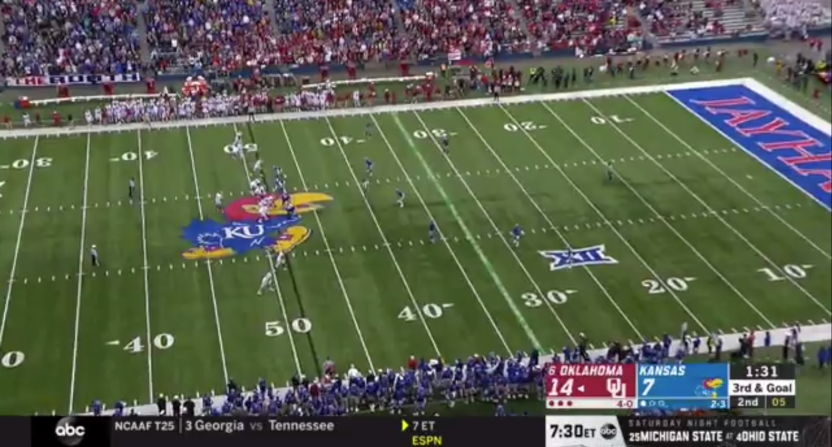 The end of the first half in the No.6 Oklahoma Sooners’ road clash against the Kansas Jayhawks Saturday had quite the sequence of events. With 2:37 left, the Sooners were up 14-7 and facing second and eight at the Kansas 28, and a trick play saw receiver Nick Basquine hit quarterback Jalen Hurts with a 27-yard pass that gave them first and goal at the seven. But then they started going backwards, picking up a holding penalty, a sack, and then this 23-yard-loss on a reverse (run on second and goal from the 25, it saw first receiver CeeDee Lamb, then Hurts taken down by the Jayhawks):

So that gave the Sooners a rare third and goal from the Kansas 48. But they looked briefly like they might be able to get into field goal range, with Hurts hitting Grant Calcaterra for a 19-yard gain. However, Oklahoma was then called for another penalty, with lineman Marquis Hayes picking up a unsportsmanlike conduct penalty.

That meant the Sooners were facing fourth and goal from the 44 with 1:15 left, and had to punt, turning what had looked like a touchdown drive into one that didn’t generate any points. However, Reeves Mundschau’s punt went 42 yards and Oklahoma downed it at the 2 (helped by Kansas not leaving a returner back), and the Jayhawks then generated nothing on their first three plays. That forced Kyle Thompson to punt out of his own end zone, and while he drilled it 61 yards, Kansas’ cover teams let him down; Lamb managed a 46-yard return, with Thompson himself finally forcing him out of bounds but taking a face mask penalty in the process, and the penalty meant the Sooners had first and goal from the 10 with 36 seconds left.

And they promptly made the most of that, with Hurts hitting Lamb for a touchdown (including some nice after-catch moves) on their first play:

So this went to halftime with Oklahoma up 21-7, which wouldn’t have been an unexpected score considering that they were up 14-7 and had first and goal at the seven with less than three minutes left. The path getting there was a lot stranger than it might have been, though.