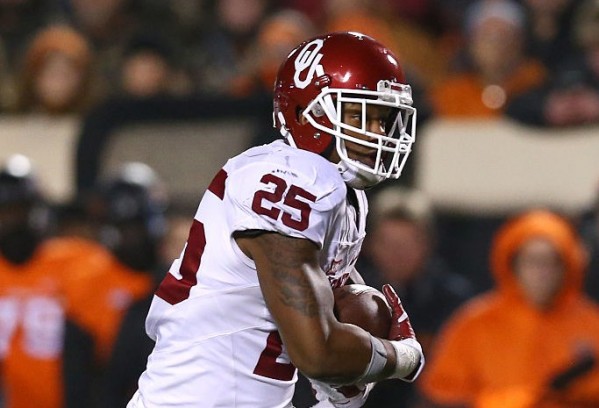 Oklahoma Sooners running back Joe Mixon was made available for questions to the media for the first time since his arrival to the school Tuesday during the College Football Playoff Media Day, and reporters looking to talk to him were slightly handicapped by the school.

Reporters were apparently told that non-football questions were strictly forbidden:

We've been told that anyone who asks Joe Mixon a non-football question will be escorted out. I'm ready for lunch anyway.

In case you are wondering, the non-football questions that would be asked of Mixon revolve around an incident where Mixon punched a female Oklahoma student in the face.

The police affidavit said the victim suffered, “a fractured jaw, fractured cheek bone, fractured sinus, and fractured orbit which caused a hematoma on the left eye.” The incident allegedly was started after Mixon used a homosexual slur towards a friend of the victim.

The incident was caught on surveillance cameras in the restaurant (the video was eventually destroyed), which happened near the Oklahoma campus. As a result, Mixon was suspended for a year from the program.

Mixon reached an Alford plea deal. By doing so, Mixon maintains that he is innocent but allowed the court to pronounce him guilty, acknowledging that sufficient evidence exists for a jury to find him guilty of his crime.

Asked if he had “any regrets at all to anything,” Mixon said: “No.” When asked if he had wanted to answer questions related to the incident, he said, “No,” and added: “Not here.”

The College Football Playoff requires all players be made available to the media, which is why this has been the first time that Mixon had to face reporters all season.

Mixon did not budge on the football-related questions only policy when pressed:

Joe Mixon on what he learned during his season-long suspension… Only answered football questions. #Sooners pic.twitter.com/F1hwXfKZX2

However, it apparently wasn’t Oklahoma’s doing – someone at the Orange Bowl apparently got a little too aggressive.

Re: the Joe Mixon football-only media mandate: I'm told it came from Orange Bowl officials, & OU did not instruct them to do so.

This is a pretty horrible look for whoever decided to put the kibosh on questions about the incident.