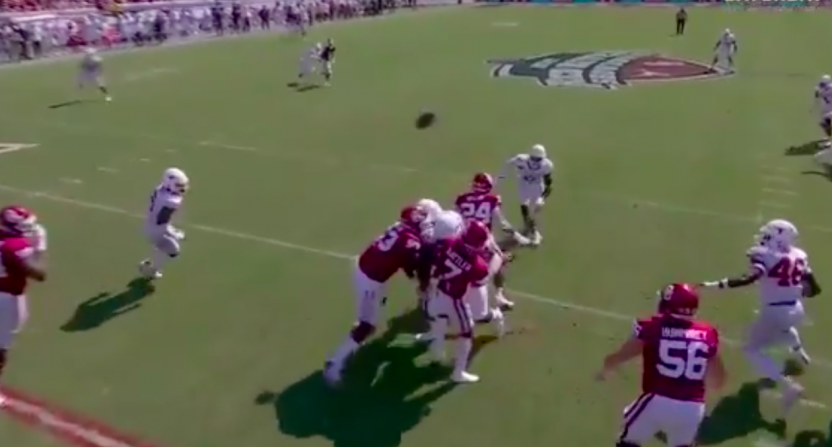 The 2020 Oklahoma Sooners football season has been an absolute disaster so far. At 1-2, they’re already out of contention for the College Football Playoff. Now, they simply want to try to save face against rival Texas in the Red River Showdown. Two early turnovers by quarterback Spencer Rattler has made that a lot harder to do today.

Rattler came into the game with a penchant for bad turnovers in recent weeks. While he was 31-of-40 for 387 yards and four touchdowns against Kansas State, his three interceptions were backbreaking. Last week, Oklahoma’s shocking loss to Iowa State was iced by a Rattler interception as well. He came into Saturday’s game with the hope that he could put the mistakes behind him and get the Sooners back on track.

Oklahoma was looking to pull away early, going up 10-0 in the first quarter. But their momentum was completely derailed due to a Rattler interception that seemed about as ill-advised as you can throw.

I'm sure Spencer Rattler is gonna be great one day but right now he is an absolute turnover MACHINE. pic.twitter.com/3zAX5RxvCR

That helped open the door for the Longhorns to get back in the game. Then, with the Oklahoma lead cut from 10-0 to 10-3, Rattler did whatever this was, which led to a fumble and a Texas touchdown to even things up.

With their momentum gone, Rattler left the game, though it was unclear if he had been benched or was injured (or perhaps the injury gave Oklahoma the reason it needed to replace him). Regardless, Tanner Mordecai entered the game for the Sooners and immediately tried to settle things down.

Tanner Mordecai is in at QB for Oklahoma as Spencer Rattler is on the sidelines getting worked on pic.twitter.com/KolMHfIfEg

For better or worse, it looks like Mordecai gave Oklahoma the shot in the arm it needed and they’ve converted a blocked punt into a touchdown opportunity to retake the lead.

The offense seems to have been energized with Tanner Mordecai in the game.

Long way to go in the Red River Showdown today but if Oklahoma wins and Mordecai stays in, we’re probably looking at a lot of interesting conversations in Norman this week.

UPDATE: It does look like the QB replacement is unrelated to any injury.

FOX's Jenny Taft saying Spencer Rattler is healthy, and that Tanner Mordecai's insertion into this game (three series and counting now) doesn't appear to be related to any sort of injury.