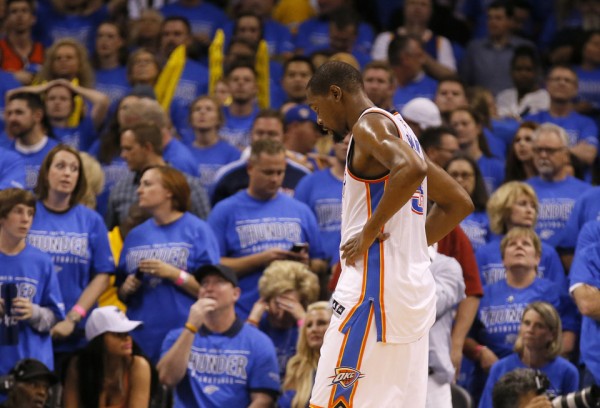 When sports curses or painful setbacks are discussed, they’re typically processed through the lens of cities such as Cleveland, Buffalo, Washington, D.C., and others.

But over the past five months, the most noticeable stomach punches in American sports have been endured by an entire state: Oklahoma.

It is true that sports problems exist in different ways and to varying degrees. The worst kind of sports existence is one in which teams never come close to achieving anything. However, it’s also painful to come close to a championship, only to be humiliated or experience a uniquely excruciating defeat.

The state of Oklahoma has lived that particular life over the past five months.

From Dec. 31, 2015 through May 30, 2016, Oklahoma-based teams made strong runs at championships, only to lose in the semifinal round of a playoff competition. The state placed a team in the Orange Bowl and the (non-playoff) Sugar Bowl, two of the most prestigious events in college football. The Sooner State also placed its flagship university in the Final Four for the first time in 22 years. Once the college football-college basketball cycle had run its course, the focus shifted to professional sports and the Oklahoma City Thunder carried the baton for the state in the NBA playoffs.

It’s a first-world problem to be one of the four best teams in the nation or (in pro basketball) the universe, but the point remains that when teams reach a great height, the fall is longer. Crashing down to earth carries more weight and emotional impact than, say, a round-of-32 loss in the NCAA Tournament as a No. 7 seed, or a first-round loss in the NBA playoffs as a 6 seed.

Oklahoma rose, and Oklahoma fell, over the past five months.

Let’s start with the appetizer on New Year’s Night.

No, the Sugar Bowl was not a playoff semifinal, but it was a classic “conference bragging rights” game. Oklahoma State played in the Sugar Bowl only because Baylor had been upset at home by Texas in the final week of the regular season. Moreover, the Cowboys were playing an Ole Miss team which had been pummeled by Memphis and Florida in the regular season. Oklahoma State therefore had to uphold its place in the Big 12 bowl pecking order, while also showing it could beat a flawed opponent. Ole Miss carried three losses into a New Year’s Six bowl for the second straight season. TCU annihilated the Rebels the previous season in the Peach Bowl. Oklahoma State wasn’t asked or expected to crunch Ole Miss, but the Cowboys certainly had to play the Rebels on even terms.

The Sugar Bowl was so bad that American sports fans turned to a Utah-Stanford college basketball game. Normally, that’s not a bad thing, but such a scenario should never take place on January 1, a day when memorable football is supposed to fill the hours. Oklahoma State got embarrassed in the Superdome, the very same place where Bob Stoops and Oklahoma had humiliated Nick Saban and Alabama in a previous Sugar Bowl a few years earlier. Getting thumped by an SEC team was no way to start the new year for the Big 12 or the state of Oklahoma… especially since this Sugar Bowl came one day after another lopsided loss:

The Oklahoma Sooners did win the 2000 college football national championship in the Orange Bowl game and the ballpark which used to be known as Joe Robbie Stadium. However, the building now known as New Miami Stadium has been a house of horrors for OU football ever since that 13-2 win over Florida State in January of 2001.

Oklahoma endured a beatdown at the hands of USC in the 2005 Orange Bowl. The Sooners fell to Florida in the 2009 BCS National Championship Game. Their return to the big stage against Clemson on New Year’s Eve was itself a triumph for head coach Bob Stoops, who outmaneuvered TCU, Baylor and Oklahoma State to lead the Big 12 into its first College Football Playoff. However, a second-half collapse against Clemson — made possible by a first-quarter unsportsmanlike conduct penalty, just when OU was on the verge of taking full control of the proceedings — reminded the Sooners of their Miami ghosts instead of chasing them away.

Had Oklahoma engaged Clemson in a 60-minute battle, the Sooners could have left South Florida with their heads held high. Being thumped in a game which was not competitive entering the fourth quarter took a small but real measure of shine off Oklahoma’s season.

No one was expecting Oklahoma’s men’s basketball team to replicate the 78-55 beatdown it delivered against Villanova in December 2015. Everything went right for OU that evening, and everything went wrong for VU. Moreover, Villanova entered the 2016 Final Four by way of a win over the very same Kansas team which had swept Oklahoma in the Big 12 regular season. This was supposed to be a very close game. Oklahoma would have covered itself in honor had it lost a tight contest akin to what Villanova forged against Kansas the previous Saturday.

However, as was the case in football, coach Lon Kruger’s crew couldn’t walk away from Houston with that measure of solace.

Villanova established a 14-point halftime lead, but college basketball has witnessed plenty of comebacks from large deficits over the years. Oklahoma had a chance to regroup at the intermission, but Villanova quickly broke the game open in the first few minutes of the second half.

Kansas throttled Marquette in 2003, in a game which was over before halftime even arrived (59-30 at the break for KU). Michigan State’s Magic Johnson team memorably dismantled ninth-seeded Pennsylvania (the last Ivy League team to make the Final Four) in 1979, the stepping stone to the championship game matchup in Salt Lake City against Larry Bird and Indiana State.

Improbably but genuinely, Villanova’s 95-51 win over Oklahoma exceeded both of those Final Four massacres by more than 10 points. The Sooners, a No. 2 seed placed one slot higher than Nova on the NCAA Tournament’s 1-68 seed list, could not have played any worse. Never has that expression been as accurate.

Then came the just-completed pro sports soul-crusher Oklahomans are still trying to come to grips with:

The Oklahoma City Thunder were beaten by a better team.

Kevin Durant and Russell Westbrook did not get enough help from their bench in the last three games of the Western Conference Finals. This forced Thunder coach Billy Donovan to shorten his rotation and overextend his stars. Golden State got more minutes from its bench and kept the Splash Brothers — Klay Thompson and Stephen Curry — comparatively fresh down the stretch.

Golden State pulled off winning streaks of 24, 11, and (on three separate occasions) seven games this past season, plus a number of six- or five-game winning streaks as well. The Warriors were used to winning three in a row, especially if two of those three games were at home in Oracle Arena, where the Dubs are 48-3 entering the NBA Finals against the Cleveland Cavaliers.

The only opportunity which truly eluded the Thunder’s grasp — the moment they could have seized, but failed to — was Game 6 of the series last Saturday night. Owning a seven-point advantage heading into the final five minutes, Durant and Westbrook were running on fumes, but they just needed to push forward one last time.

The Thunder were not expected to do anything when the NBA playoffs began. Their coach, Billy Donovan, instantly transformed his reputation among a skeptical audience of NBA critics, who had no reason to think highly of him based on an underwhelming regular season. Durant played the best defense of his career. The Thunder won six games in a seven-game playoff stretch against the Warriors and the San Antonio Spurs. Oklahoma City came within one win — more precisely, within five Game 6 minutes — of knocking off a 73-win opponent and a 67-win foe in consecutive playoff series.

The Thunder performed quite admirably in the playoffs, better — far better — than their fans had a right to expect. Yet becoming the 10th NBA team to lose a playoff series in which it owned a 3-1 lead — just the third NBA team to blow a 3-1 series lead in the conference finals round — left OKC with the empty feeling which torments losers throughout an offseason.

The Thunder didn’t choke; an historically great opponent took the West Finals away from them. But that’s precious little comfort to the people of Oklahoma, who have enjoyed so many championship chases the past five months, only to see those pursuits end in shattering disappointments of various kinds.

Oklahoma: where the wind comes, bringing down the pain.