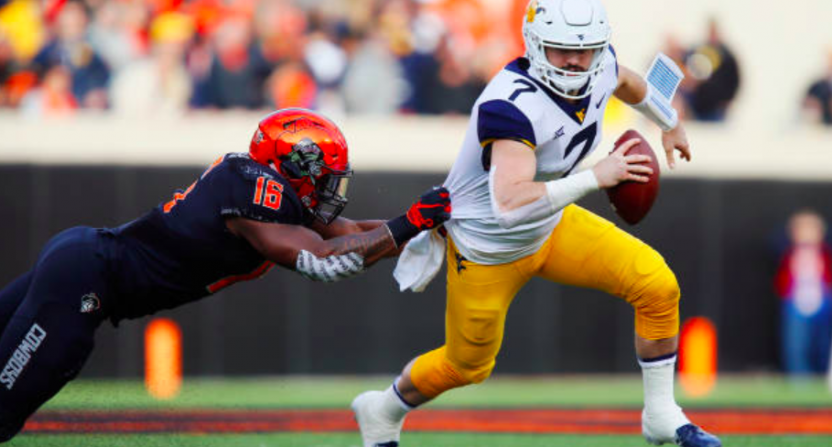 The Oklahoma State Sooners are now bowl eligible at 6-5 on the season, but they are also 3-1 against teams ranked at the time of the game. The most recent victory was a 45-41 upset of No. 9 West Virginia Saturday, capped off by a Taylor Cornelius touchdown pass in the final minute.

The game started out a little sloppy, with each team scoring a touchdown in the first quarter, but each also punting after two short drives. West Virginia took control of the game in the second quarter, forcing three turnovers and building a 17-point lead going into halftime.

Mike Gundy led his team to a second-half turnaround, cutting the lead to three points with just over ten minutes to go. West Virginia quarterback Will Grier wanted to put the game away, though, leading the Mountaineers on an excellent touchdown drive. He converted two fourth downs (one via penalty), capping the drive with a six-yard touchdown run to the right on fourth and goal. West Virginia was ahead 41-31 with 7:37 to go, and the lead and Playoff hopes looked intact.

Taylor Cornelius had other ideas, though. He gashed the Mountaineer defense for a ten-play touchdown drive in under three minutes. Then, following a defensive stand (including a puzzling third-down play-call by West Virginia), Cornelius was back to lead his offense again. Oklahoma State went 75 yards in under two minutes–and most of those two minutes were milking the clock at the end to not give Grier more time. It was a beautiful coaching performance by Mike Gundy and a beautiful offensive performance for Cornelius. Grier actually led the Mountaineers down the field afterwards and had a final play for the win from the Cowboy 14-yard line, but his floated pass was broken up and landed incomplete.

Honestly, it’s futile to even try to understand the Cowboys this year. They looked terrible against Texas Tech and Kansas State in blowout losses. They lost tough games to Iowa State and Baylor. On the other hand, they blew out Boise State and held on to beat Texas. The Cowboys came heartbreakingly close to upsetting rival Oklahoma last week. And now they just upset West Virginia. It’s both refreshing for fans, and frustrating to know that this team can compete at an elite level but just didn’t bring its best week-in and week-out.

For West Virginia, this loss really hurts. The Mountaineers now essentially need a miracle to make the College Football Playoff. They need some help from Texas or Kansas State just to get into the Big 12 Championship Game. Even if they win the conference, it will take a ton of chaos to make the Playoff.

Also, unfortunately, this will unfairly put an end to Will Grier’s Heisman hopes. Grier was very good today–not perfect, but strong. He put together good drives throughout the game, and perfectly led one that almost put the game out of reach. He even almost miraculously earned a game-winner in less than a minute, but it was batted down. In a race that looks at performance more than wins, this game would help his Heisman campaign. Unfortunately, that’s not how the Heisman works. Grier might still get an invite to New York City, but it’s highly unlikely he wins the trophy now.