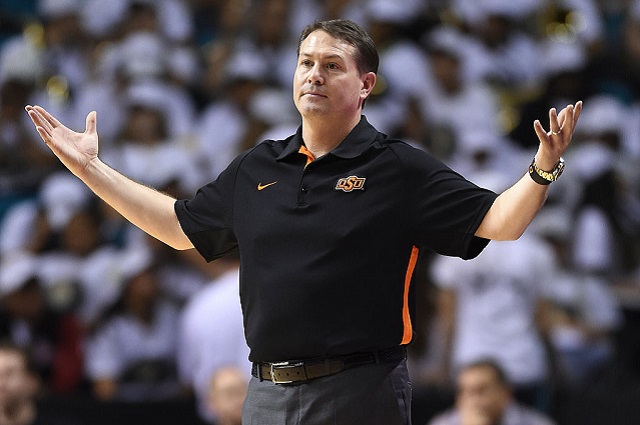 Being the son of a head coach at a high profile school is difficult enough, but when parent meets sport he coaches, it can get extra difficult. On Thursday night, Oklahoma State head basketball coach Travis Ford and his son found that out the hard way.

Tulsa World‘s Mark Cooper reports that Ford was ejected from his son, Brooks’, high school basketball game. Stillwater High School was taking on Bartlesville with Ford seated behind the bench of his son’s team, and apparently he got a little boisterous for the officials.

Said officials asked Ford to leave the game, but according to the same report, multiple witnesses on scene believed the ejection was more overreaction than anything Ford overtly did to warrant it.

According to Cooper, sources believed it to be a situation of official baiting the famous person behind the bench in to something to make a name for himself.

“(Smith) kind of baited him into it,” the school official said. “Travis came in to watch his son play, and I felt like he was baited into the whole thing. … When all of this took place, I didn’t hear one single thing said. The official blows his whistle, points (at Ford) and says, ‘You’re gone.’ And then I saw Travis walk out.”

What kind of talk would have prompted an ejection then? Apparently, it was Ford trying to assist the officials in getting out of a timeout.

Smith, the game official, was speaking with the Stillwater coach when Ford said something, believed to be “You need to blow your whistle,” according to sources at the game.

Rather than put up a fight, Ford walked out of the gym and met with school officials following the game. Since Ford is not on the coaching staff (obviously) or isn’t a player (even more obvious), there won’t be a report filed of the incident and it won’t cost his son’s team any sort of punishment. An Oklahoma State spokesperson had no comment on the incident.

However, this incident also highlights how difficult it can sometimes be to turn off the job while putting on the parenting hat. Ford and his son aren’t the first father-son combination of coach and player to face this kind of scrutiny and they certainly won’t be the last either.