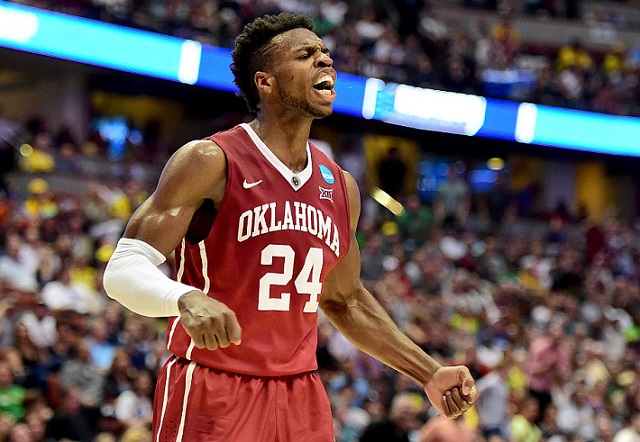 There’s no denying that American culture, as a general rule, always tends to be looking ahead to the next thing. The new Star Wars movie wasn’t terrible? Phew. OK, now what do we know about the next one? Still playing Xbox? Pffft, Oculus Rift is where it’s at now. Oh, and is George R. R. Martin ever going to finish those damn Game of Thrones books, or what?

Unsurprisingly, our sports fandom follows these same principles. We’ll barely be finished picking up the confetti from one big event before we’re looking ahead to the future. Or, in some cases, we won’t even wait that long.

Take, for example, the case of one Buddy Hield, last seen in full supernova mode, carrying his Oklahoma Sooners to their first Final Four since 2002. And so, naturally, one of the biggest discussions in sports this week is how this 22-year-old, 6-foot-4, 212-pound, Bahamian sharpshooter will translate to the next level. Never mind the fact that, well, he’s still got a NCAA Tournament to finish up.

There’s nothing wrong with this, of course, and it’s perfectly understandable why we’re so wired to project forward. We’ve all loved having BuddyMania in our lives this March, and so it’s natural to wonder, and hope, and even argue about whether Hield has NBA stardom, or, for that matter, just a long career period, in his future. It’s a fascinating question, given his age, and development to this point. Rather than a McDonald’s All-American with pro-ready athleticism who simply flies through the college system as a required stop-over, Hield is old enough to make you wonder how he’ll fare against improved competition, yet skilled enough to make you believe he’s got a fighting chance.

But it would be a shame, truly, if the questions about Buddy Hield’s future somehow overshadowed his incredible present. Through four NCAA Tournament games thus far, he has shot 56.7 percent from the field, 47.5 percent from behind the arc, averaged 6.5 rebounds, and oh yeah, contributed 29.25 points per game to his team’s winning efforts.

Need some perspective? Well, the record for most points scored in a single NCAA Tournament belongs to Michigan’s Glen Rice, with 184. With 117 and potentially two more games to play, Hield could still make a run at the record.

Of course, those are individual records, and they’ll be remembered, to be sure. But what’s really at stake is a chance to grab two more wins, by any means necessary. If Oklahoma can make it happen, and if Hield can sustain his current level of excellence, he’ll join a rather exclusive club of players who have taken over the tourney, who put their stamp on a particular Big Dance and took home the title, once the field was expanded to 64 teams in 1985.

We might as well begin with Rice, whose run through the 1989 NCAA Tournament set a standard that still hasn’t been topped. Yes, scoring was at a higher level during this era, with Michigan scoring 80+ points in every one of their victories. But there’s no diminishing what Rice did for the Wolverines, shooting 57.2 percent from the floor for the tournament.

It’s worth carving out a spot for The Brow, if only because he’s not what typically comes to mind when you think of a historic tourney run. In recent memory, we’ve become more accustomed to March being taken over by dazzling point guards or athletic wings, not monster big-men. That’s why it was so impressive to watch Davis do it with defense. Though he averaged just 13.7 points per game, there was never a doubt that Kentucky’s gifted centerpiece was the best player on the floor, blocking six shots in the championship game, altering them throughout the tournament, and generally wreaking havoc on the opponent’s game plan.

Are we cheating here? Sure, maybe a little. But it seems only appropriate for these two sensational Connecticut point guards to share a spot, if only because their respective runs, separated by three seasons, seem forever linked. Walker’s incredible March, in 2011, actually began well before the NCAA Tourney, as the electric junior point guard hit a game-winning buzzer-beater to advance to the semifinals of the Big East Tournament, carried the team to a conference title, and never got off the gas in leading UConn to a national championship. Over the course of the remarkable 11-0 run that made up the 2011 postseason, Walker averaged 24.6 points per game.

Three years later, it was Napier, who’d been a freshman reserve during that 2011 title, putting his own stamp on the 2014 tournament, averaging 21.2 points per game. Napier’s scoring, and command of the offense, were impressive on their own. In the context of what it meant for Connecticut, which was returning to the postseason following NCAA sanctions the year before, his incredible run takes on even greater significance.

He is, in many ways, the standard by which all other great tournament performances are measured. After a 12-8 start to the 1987-88 season, the Kansas Jayhawks were the last team anyone expected to be battling for a championship. But “Danny and the Miracles” (a nickname that the star forward himself wasn’t too fond of), took off come tournament time, with Manning averaging 27.1 points per game, and leading KU to victories over Kansas State, Duke, and Oklahoma in the championship game.

Though he went on to a long NBA career, and now serves as the head coach at Wake Forest, Manning will always be remembered for that remarkable period in which he put the storied Kansas program on his back.

A subjective, personal choice? Undoubtedly. But go talk to anyone who watched Syracuse’s run through the 2003 NCAA Tournament, and chances are they’d feel compelled to make the same one. More than a decade ago, in a pre “one-and-done” world, fans hadn’t yet grown accustomed to the notion of a prolific prospect arriving and immediately taking over the college game. And so, to watch a baby-faced Anthony, at just 18 years old, exert his dominance over the field, was something to behold indeed. For six games, ‘Melo was a boy among men, teaching them all how to play.

It’s one thing to dig through the numbers, (47.4% shooting, 20.2 points, and 9.8 rebounds per game in the tourney). It’s another entirely to remember the smoothness of Anthony’s game, eluding defenders, creating space, finding ways to knock down shots from seemingly every angle. It was a virtuoso performance well beyond his years, and was only proper for it to culminate in a national championship.

That, in a nutshell, is what’s at stake for Buddy Hield over the course of the next few days. His individual greatness — over the course not only of this tournament, but the entire season — has already been established. Being awarded the Naismith Trophy on Saturday seems increasingly likely. But only with two more victories, only by closing things out and capturing a championship, can Hield’s run truly be perceived to be as significant, as dominant, as unforgettable as the ones listed above. And having waited a full four years to finally play on college basketball’s biggest stage, it’s an opportunity he surely recognizes.

“Oh, it’s special, to be honest with you,” said Hield last Saturday following the win over Oregon that punched their ticket to the Final Four. “As a kid you dream of having games like this. But I just thank my teammates and my coaching staff to put me in the position to score the ball. And they gave me the confidence to put the ball up.”

You can expect him to put the ball up plenty on Saturday night against Villanova. Oklahoma didn’t come this far, after all, to put the game in anyone else’s hands. And it’s those hands, that incredibly quick release, that impressively accurate shot, that has made Buddy Hield the talk of the tournament, and drawn comparisons to some of basketball’s best. On Saturday in Anaheim, with Kobe Bryant in the crowd, it was perhaps inevitable that someone who made the comparison to the Black Mamba himself, one that Hield wanted no part of.

“I’m not Kobe Bryant,” he told the gathered media, “and they should not compare me. I’m far away from him.”

Indeed he is, not simply because there’s a long way to go before Hield even approaches that level of greatness, but also because that one shining college moment is something Kobe Bryant never had. The NCAA Tournament has its own identity, creates its own memories, and no matter what the future holds for Buddy Hield, two more wins will cement him a place in the annals of March forever. So try not to get too hung up on what happens next.

There are very few who even get to where Buddy Hield is right now.