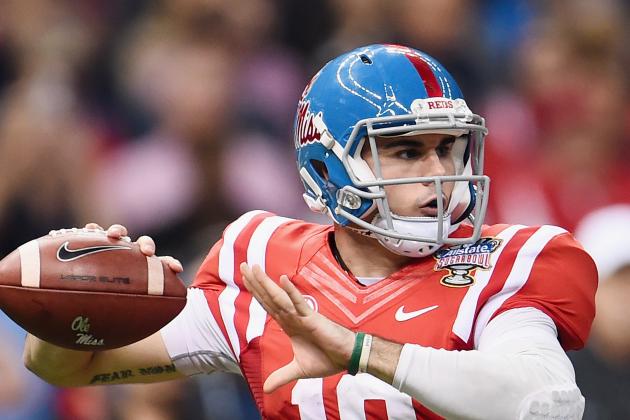 What a difference a year makes for the Mississippi football program.

Friday night, Ole Miss ran wild in the Sugar Bowl in ways that few teams have done before.

The 48 points scored by the Rebels was the third-highest scoring mark in the game. The only teams to score more were the Florida teams that put up 52 and 51 points, respectively, in the 1997 and 2010 editions of the Sugar Bowl. The Rebels scored 34 points in the first half and played with the same style and charisma that earned them a win in the Egg Bowl over Mississippi State.

In what was probably his last game for Ole Miss, Laquon Treadwell went on in a flash of speed. The receiver caught six balls for 71 yards and three touchdowns. Every time the ball was in his hands he was pure electricity, and he threw a pass for 45 yards to boot. His dramatic broken leg in the 2014 Auburn seemed eons ago, as he ran past the Oklahoma State defense.

Nothing is amiss for #OleMiss in the #SugarBowl.

Treadwell shined, but he wasn’t the only shimmering light on the night for Ole Miss. Chad Kelly slung it like his uncle Jim used to do. Kelly threw for 307 yards and four scores. More impressive than that was the fact that he found eight different receivers. Evan Engram led the team in yardage with 96. Ole Miss also found 204 yards on the ground; Kelly led the way with 73.

For a team that experienced the highest highs (wins over Alabama and Mississippi State) and lowest valleys (two losses in a three-week midseason stretch), the win was the ultimate cherry to top off the season. The Rebels got their doors blown off by TCU in last season’s Peach Bowl, but if the team was burdened by that memory, you never would have been able to tell.

Ole Miss — coaches and players alike — rebounded this time around. With a new quarterback at the helm, the Rebels relied on their strong defensive unit, which was missing star Robert Nkemdiche in the Superdome, to work their way to a 10-3 season. It’s the seventh 10-win season in school history and the first since 2003.

#OleMiss is having a ball in the Big Easy.#SugarBowl

On the other side of the ball, it was “oh so wrong” oh so often for Oklahoma State.

The Cowboys were held to 366 yards, a big drop off from their season average of 489. The Pokes’ high-octane offense was completely shut off in the first half. OSU had seven possessions in that half, but only one of them went for more than 30 yards. The Cowboys gained only 143 yards in the first half as opposed to a whopping 411 by the Rebels. By the time Oklahoma State found a rhythm, the game was lost.

Looking at the bigger picture, the loss capped a deflating end to Oklahoma State’s season. After starting 10-0 and being in the playoff chase, the Cowboys lost their last three games, including a 58-23 loss to Oklahoma in Stillwater to end the regular season. The record might say 10-3, but this season could be considered lost by the Pokes because of the inauspicious way in which it ended.

Bowl games are weird because, aside from the College Football Playoff, they mean everything and nothing. In New Orleans it was Ole Miss that looked like a million bucks, and it was Oklahoma State that looked like it didn’t belong. However, as the Rebels showed after rebounding from last season’s Peach Bowl, a big bowl loss in one year could be the fire needed to push next year’s team to be even better.

Oklahoma State should not lose heart… even though it lost convincingly on Friday night.