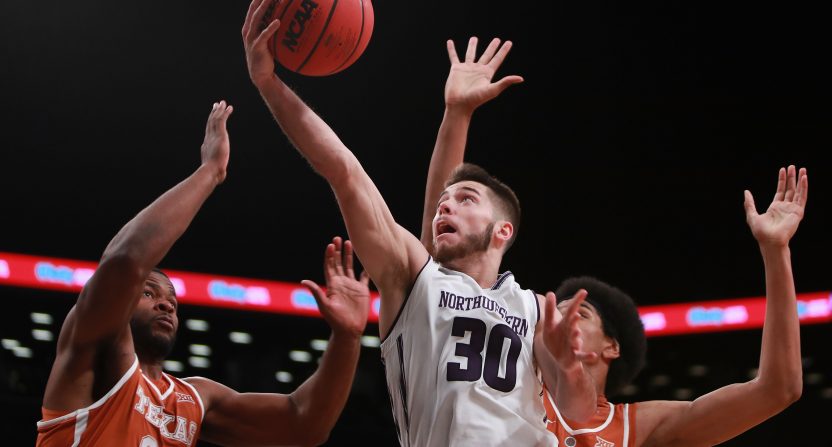 Some time in the last few months, when no one was looking, Northwestern became a basketball school.

As you’ve likely heard, Northwestern is on the cusp of breaking the most embarrassing streak in college sports. The Wildcats have won 19 games this season, including eight in the Big Ten. On Sunday, they beat No. 7 Wisconsin 66-59 in Madison. Every prognosticator worth his bracket has Northwestern in the NCAA Tournament field. ESPN’s Joe Lunardi projects the Wildcats as a No. 7 seed.

I graduated from Northwestern last spring, having watched the basketball team go 62-67 in my four years. Feeling unlucky to have missed this incredible run and yearning to be part of the magic, I returned to Evanston on Wednesday for the Wildcats’ game against No. 23 Maryland. I hardly even recognized what I saw.

Welsh-Ryan Arena is the type of small, old-timey building that can be electric when it’s full, but painfully dreary when it’s empty. Unfortunately, Welsh-Ryan has been dreary during most of its history. It was not unusual, during my time at Northwestern, for the arena to be half-full for conference games. When good crowds showed up, it was often to watch the other team.

Wednesday was different from the opening tip. The student sections on opposite ends of the court were packed to the rafters. The highest reaches of the arena had barely an empty seat. And unlike past crowds that have appeared impressive thanks only to a wave of opposing fans, the audience Wednesday was decidedly purple.

When sophomore center Dererk Pardon dunked on Northwestern’s first possession, the crowd erupted as if it were the Big Ten championship. When freshman guard Isiah Brown hit a 3-pointer moments later, the fans acted like it was the Final Four.

Of the dozens of games I’d been to at Welsh-Ryan, none felt quite like this one. The Wildcats have drawn good crowds before, usually at the heels of a surprising, vaguely fluky win streak, but this time the audience possessed an unmistakable swagger. Members of the football team led a lively student section. A guy wearing nothing but a purple Speedo distracted Maryland foul shooters. An older man sitting along the concourse held a sign reading “I’ve been an alumnus for 52 years, and I’m cheering louder than ever.”

At some Big Ten arenas, all this would feel like just another Tuesday. And that’s the point: For the first time anyone can remember, Northwestern feels like any other Big Ten program.

It helps that the Wildcats now play like any other Big Ten program, as well. While former Northwestern teams tried (and mostly failed) to get by on guile and discipline, this group is athletic and strong. Longtime fans must now adjust to a team that dunks more than twice a month and sometimes pulls down an offensive rebound in traffic.

Watching Northwestern this year is like being a kid who’s gotten socks for Christmas eight straight years, then looks under the tree one December and finds a new Xbox. It’s no wonder fans are excited.

For years, Northwestern fans have debated whether the basketball program’s immutable failures were the fault of coaches who couldn’t recruit enough to keep pace in the Big Ten or whether they owed to intrinsic factors (facilities, academic standards, administration) that made success in Evanston impossible. Just to be safe, the school has sought to address both issues. Athletic director Jim Phillips hired Chris Collins, a charismatic young coach with a Duke pedigree, to solve the coaching issue. He also turned an aggressive fundraising push into a new court, new video boards and — coming soon — massive arena upgrades.

Accordingly, Collins’ first three recruiting classes ranked No. 49, No. 64 and No. 58 in the country, according to 247Sports. That may not make John Calipari jealous, but given that the previous 10 classes, under former coach Bill Carmody, had achieved an average national ranking of 111th, it’s a clear step forward for Northwestern.

Meanwhile, improvement on the court has been slow but persistent. Collins won 14 games in his first season in Evanston, 15 in his second and 20 in his third. Now, in his fourth campaign, the Wildcats have 19 wins with five regular season games and the Big Ten Tournament still to come. The headliners of Collins’ first recruiting class — Bryant McIntosh, Vic Law and Scottie Lindsey — have blossomed into stars.

Of course, progress isn’t perfectly linear, and Wednesday was not a banner night for the Wildcats. Northwestern fell behind early and trailed the entire game. Collins would say afterward that the team looked “a step slow.”

Still, the crowd was great the whole way through.

When Northwestern trailed Maryland by 10 at halftime, the building felt as lively as ever. In past years, a double-digit deficit at the break would’ve had some fans planning their trips home. Once in 2015, I watched (and eventually joined) as seemingly half the student section made for the exits at halftime of a blowout loss to Michigan State. I made sure my friends stayed for the halftime magic show, though. That was better than the basketball.

But on Wednesday, the Northwestern crowd stayed present and engaged no matter how far Maryland stretched its lead.

When Melo Trimble hit an and-one lay-up with nine minutes to play to put the Terrapins up 20 points, I turned to watch fans file out. Instead, they stayed in their seats and kept cheering Northwestern baskets.

Perhaps buoyed by the energy in their home building, the Wildcats began to make a run, slicing the deficit to 17, then 15, then 12. When Northwestern made it a single-digit game with three minutes to play, most of the 8,000 fans in attendance rose to their feet. The Terrapins responded with a score, but the arena remained packed to capacity. The crowd mostly stuck around as Northwestern spent the final two minutes fouling to prolong the game. Only when the result was truly sealed — Maryland eventually won 74-64 — did fans grab their coats.

If none of this sounds exceptional to you, you haven’t sat through Big Ten games that felt more like MAAC games. You haven’t excitedly showed up to an exhibition game your freshman year to find yourself among only a dozen students in attendance. You haven’t remarked at the size of a home crowd, only to realize that 60 percent of the fans were cheering for the opponent.

After the game Wednesday, both coaches commented on the atmosphere at Welsh-Ryan, with Maryland’s Mark Turgeon noting wryly that, “it was a little different from last time I was here.”

For the rest of the night, I couldn’t stop talking about how crazy the crowd was, how much energy the fans had brought even in a 10-point loss, how much different the building felt from only a couple years ago. Though everyone agreed, multiple people assured me I’d barely seen anything. “You should’ve been here for the Indiana game,” they told me, referring to a 23-point win late last month. Now that, so I hear, was truly crazy.

Is this the new normal for a school that typically puts schoolwork first, second and third, football fourth and basketball distantly thereafter? For a school that cares infinitely more about its spot in the U.S. News & World Report college rankings than its place in the AP Top 25? Probably not.

For one thing, Northwestern will play next season’s home games at Allstate Arena half an hour from campus, as Welsh-Ryan undergoes renovation. With many fewer students able to attend, the atmosphere promises to be worse. Any momentum from this season could be sapped by the time Welsh-Ryan re-opens.

More importantly, Northwestern basketball will likely lose the No. 1 thing keeping it relevant: its historic NCAA Tournament drought. The current exuberance among Wildcats fans, like all past bursts of enthusiasm for this program, is motivated by a clear and measurable goal. If Northwestern finally makes the Big Dance, what will a fanbase that has always had a one-track mind have left to root for?

That’s an issue for another day. For right now, as the Wildcats chase history, basketball matters in Evanston. Who would’ve thought?