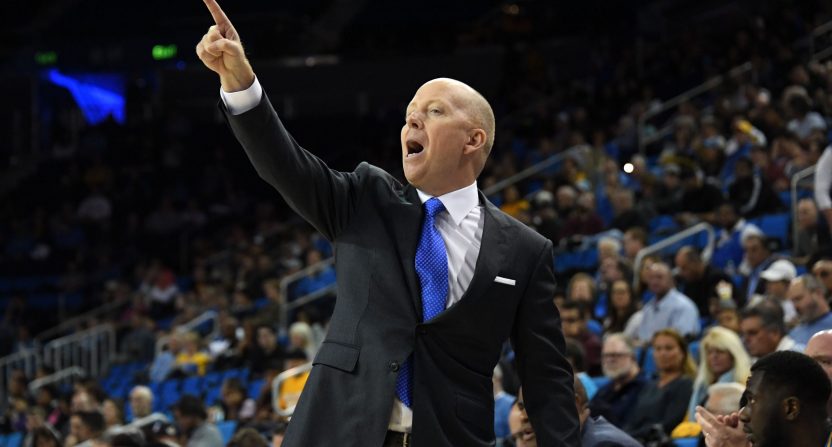 Sometimes it’s easy to make fun of UCLA. The once-proud, tradition-rich program has an inflated sense of self. It’s a blueblood in name only these days. The Bruins haven’t been nationally relevant in over a decade, and early on this season they looked like a horror show.

“You know the buy-in is there,” said first-year coach Mick Cronin, whose team was picked to finish eight in the conference preseason poll. “I came to UCLA for the long haul. Even when we were struggling, I was just focused on who we were going to be and not the result that day.”

There’s still considerable work to do. According to ESPN.com’s Joe Lunardi, UCLA are among the first four out of the NCAA field of 68.  And the Bruins are No. 76 in the NCAA’s NET Ratings. But the fact that even we’re having this discussion is a major achievement.

All of this seemed impossible was the team was 8-9, 1-3 last month with home losses to Hofstra (22-7) and Cal State Fullerton (10-17). Cronin is hindered by a lack of talent. There are no McDonald All-Americans on the roster for the first time since the inception of the award in 1977. Still, for a notoriously ultra-competitive coach, this was unacceptable.

Cronin went further: “Our selfishness at times is evident on the offensive end. We have guys that just refuse to listen and follow orders, so they don’t get to play. I had to keep playing certain guys that I don’t think deserve to play.”

The players appear to have gotten the message. They have picked up key road wins at then-No. 23 Arizona and then-No. 18 Colorado. With three games left in the regular season (two at home), UCLA has a shot at winning the Pac-12. The most important game will be Thursday’s matchup against league-leading Arizona State.

UCLA has turned around its season thanks to rebounding. In conference games only, the Bruins lead the league in offensive rebounding percentage (34.1) and are second in offensive rebounds per game (11.36). In all games, the Bruins lead the Pac-12 and are 30th nationally in rebounding margin (+6.26). UCLA doesn’t have a scorer among the top 18 in the conference, but the Bruins are balanced with five players averaging at least 8.2 points. Junior guard Chris Smith (13.19) leads the way.

Cronin eventually hopes to build a team built on toughness, like the ones he coached at Cincinnati. The former Bob Huggins and Rick Pitino assistant has enjoyed a good career, but there were multiple and legitimate questions when he was hired by the Bruins.

As mentioned earlier, UCLA has a high opinion of itself. The Bruins have won more national championships (11) than anyone else. But the days of John Wooden are long gone. Heck, the days of Ben Howland are long gone. Only one of those national titles came after Wooden when Jim Harrick won in 1995. After Harrick was fired amidst scandal, Steve Lavin, Howland, and Steve Alford all took their turns at trying to bring back to championship glory.

Howland came come close. He guided the Bruins to three straight Final Fours (2006, 07, 08), including the title game in 2006. But after five consecutive seasons of not getting past the first weekend of the NCAA tournament, Howland was canned following the 2012-13 season after going 25-10, 13-5.

UCLA hasn’t won the Pac-12 since. Alford’s record (.663 winning percentage) wasn’t as good as Howland’s (.685). When Alford was booted out in December 2018, UCLA reached for the stars. The Bruins tried to lure John Calipari away from Kentucky. Then they tried to lure Rick Barnes from Tennessee. The only thing UCLA accomplished was getting both coaches raises. The Bruins “settled” on Cronin. This was not the home-run hire UCLA fans were hoping for.

Cronin, underappreciated at Cincinnati, was eager to take the job. His resume was solid (296-146), but he also had just one Sweet Sixteen appearance in 13 seasons. Alford had three Sweet Sixteen trips in six years. Plus, Cronin had no West Coast ties. It seemed like an unusual fit.

But perhaps Cronin is exactly what UCLA needs: an outsider to instill a different culture. He needs time. This will probably be the least talented roster he will have going forward. Next year the team will add McDonald’s All-American guard Daishen Nix.

Rebuilding UCLA won’t be easy. But if the Bruins are patient, this could turn out to be the right hire. Cronin is already off to a better-than-expected start. It’ll look even better if he can win the Pac-12 in his first season.