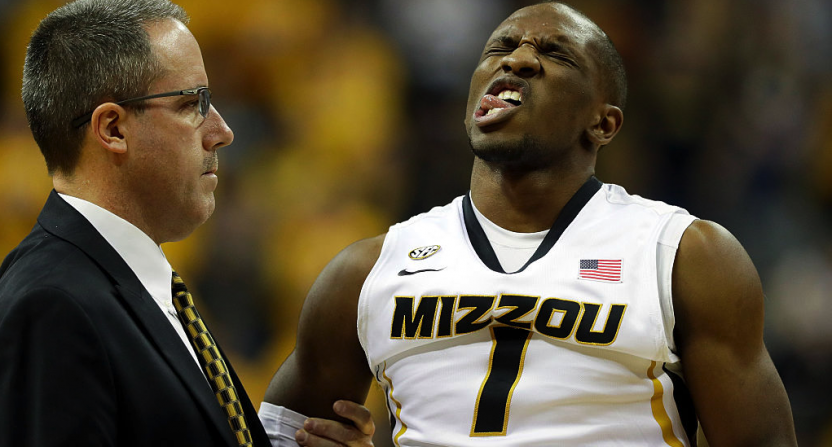 Once upon a time Missouri was one of the top basketball programs in the country. With the venerable Norm Stewart on the sidelines, the Tigers were consistently among the nation’s best teams over the 70s, 80s, and 90s. Stewart won 634 games at Missouri as the Tigers won eight conference championships with the Hall of Famer at the helm.

Even after Stewart left, Mizzou remained one of the preeminent basketball powers of the Midwest, even as controversy began to rock the program. Current Utah Jazz coach Quin Snyder took over from Stewart and led the program to the Elite Eight in 2002 before resigning in 2006. The Tigers were under the microscope from the NCAA, thanks to allegations of recruiting violations under Snyder during his tenure.

Mike Anderson was next and the former UAB coach had a 31-win season in 2008-09 with the team reaching another Elite Eight. However, after three straight NCAA Tournament appearances, Anderson abruptly left for Arkansas.

Enter Frank Haith. In his first season in Columbia, Haith had the Tigers as high as No. 2 in the country and a 30-5 season in 2012. But just as the Tigers were flying high once again, they were unceremoniously dumped from the NCAA Tournament as a No. 2 seed in a shocking upset to Norfolk State.

You probably know how this ends. In just two short years, Haith quickly departed Missouri for Tulsa and left the Tigers holding the bag with NCAA violations under his watch. Mizzou vacated wins and implemented a postseason ban in an investigation that finally came to a conclusion before the 2016 season.

With the revolving door at head coach since Stewart retired, Mizzou looked for some stability in hiring Kim Anderson from Central Missouri in 2014, where he had been head coach since 2002 and had just won the D-II championship. Who better to take Missouri back to its former heights, and actually stay in Columbia, than someone who was a player and coach under the legendary Stewart.

That was the dream scenario. The reality was what happened in hiring a coach in his late 50s with zero D-I head coaching experience. Missouri asked Anderson to step down this week after a paltry 26-67 record in three seasons.

Just how far has Mizzou fallen? They’ve gone from battling Kansas for Big 8 glory in one of the sport’s biggest rivalries to the cellar of the SEC, where their path to success was supposed to be easier, not more difficult.

Just how bad have things gotten for Mizzou? This season’s 7-23 record is the fourth-worst in the history of the program that dates all the way back 111 years! The Tigers lost games to the likes of North Carolina Central, Eastern Illinois, and Lipscomb — all on their home floor.

Missouri has a great basketball history and may be the most accomplished program to never make a Final Four. Only BYU and Xavier have more NCAA Tournament appearances without making it to the sport’s ultimate showcase. The fact that they haven’t done so is a unique mixture of bad luck, bad losses, and bad timing. In fact, they may be one of the most snakebitten programs in all of sports with an 0-5 record in the Elite Eight with losses ranging from being a No. 1 seed in 1994 to a No. 12 seed in 2002.

Given that level of success over the years, it’s shocking to see the depths to which Mizzou basketball has fallen so quickly. Missouri has a decent recruiting landscape, a new arena, and great history to lean on. While it hasn’t been home to many superstars over the years, Mizzou has produced many NBA pros like Kareem Rush, Keyon Dooling, DeMarre Carroll and Jordan Clarkson, just to name a few. In spite of the quick turnover, every coach who preceded Kim Anderson was able to at least have one great season.

Nevertheless, a toxic combination of coaches making lateral moves to other schools (Tulsa?!?), NCAA violations, and a swing and miss on the Anderson hire has finally taken its toll. The Tigers filled Mizzou Arena to about one-third of its capacity this season with just over 5,000 fans a game — the lowest in recorded program history.

Another huge factor that we haven’t touched on yet may ultimately be what’s behind the lifelessness of Missouri’s basketball program: the move from the Big 12 to the SEC. It’s entirely fair to say that the SEC is not a basketball conference, at least not after Kentucky. And conference realignment is all about football and the dollars it can bring in.

For the Missouri football program, the SEC move started out as a great one as the program reached two SEC title games and proved themselves in the toughest conference in America. Of course, the football program is going through trials of their own at the present time.

But for as many years as Missouri was known nationwide as a basketball school, it’s largely been left in the dust. Gone is their historic rivalry with Kansas, which was right up there with Duke-North Carolina and Kentucky-Louisville as one of the best in the sport. Gone are all the other conference rivalries from the past several decades. In their place? Match-ups with the likes of Auburn, Georgia, Mississippi State, and others. It’s tough to build a rivalry from scratch and without the immediacy of football’s regular season, the drama and intrigue in some of those games are fleeting.

It’s sad that one of college basketball’s former powers has largely been lost in the shuffle of conference realignment, but that’s where Missouri finds itself at the present time. It’s a massive rebuilding project for whomever walks into Columbia next — not only on the court, but off the court as well. Wherever Mizzou goes next, it can only go up from here.