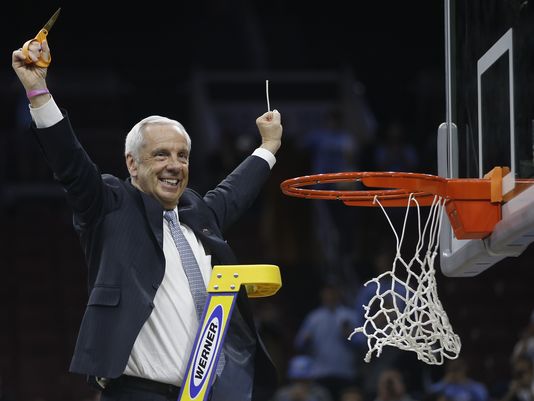 Business before pleasure: The North Carolina Tar Heels — an embattled program with an embattled coach facing an uncertain future in the face of an NCAA investigation — felt an uncommonly large weight as they took the court for Sunday’s East Regional final in Philadelphia.

Staring at the possibility of postseason ineligibility in 2017, and bereft of a single Final Four appearance since 2009, the Tar Heels faced a win-or-else situation even more acute than what Bill Self has to deal with at Kansas, or what Tony Bennett and Virginia faced (poorly, as it turned out) earlier on Sunday against Syracuse.

Kansas takes its basketball just as seriously as North Carolina, but the Jayhawks have no off-court cloud hanging over them. Virginia cares about hoops, but it will never care about hoops the way UNC does. This was unique, and as Kent Babb expressed in this excellent piece in the Washington Post on March 25, Roy Williams felt every last ounce of this pressure, in every one of his aching bones.

North Carolina and its coach needed this one badly. This was a grim business trip. Nothing less than the Final Four would have been acceptable.

Now, the Tar Heels — their journey not done, their aspirations not yet fully satisfied — can at least claim college basketball’s fundamental seasonal achievement as their own: They’re back in the Final Four.

On a day when Virginia — the epitome of poise all season long — abruptly lost it against Syracuse, North Carolina showed supreme composure in the face of a spirited Notre Dame rally. That firmness of mind and method carried the Tar Heels to their 19th Final Four, the most in Division I college basketball. They’re the only No. 1 seed in this NCAA tournament to move on to Houston.

That’s the business North Carolina took care of on Sunday.

There’s a little more to be said about how the Tar Heels triumphed, but let’s now acknowledge the pleasure derived from watching this game. It was FUN, a welcome departure from most of Virginia-Syracuse, and a lot more aesthetically pleasing than the rock fight between Kansas and Villanova.

Just look at these plays in an above-the-rim flying trapeze artist’s fantasy:

This was not easy.

That was just a sample of the larger theater of acrobatics Notre Dame and Carolina delivered to the Philadelphia crowd and a national television audience. Notre Dame once again won fans after a bold and artful performance — albeit an inadequate one — in a second straight regional final.

Demetrius Jackson poured in 26 points on 10-of-16 shooting. North Carolina never really could stop him. V.J. Beachem demonstrated his shooting prowess yet again, hitting 6 of 9 field goals and 3 of 5 triples en route to 18 points. Notre Dame shot 55 percent from the floor, a performance which should generally be enough to win at this level of competition.

Yeah — North Carolina’s offense has hit its stride at the perfect time of year.

The Tar Heels shot 61.5 percent from the field and relied on their size to get shots within five feet of the basket. They didn’t hit the flood of threes they nailed on Friday against Indiana, and to their credit, they didn’t keep hoisting. They stuck with a simple plan and executed it well… which is how you shoot over 61 percent and beat a hot-shooting foe by 14.

This was the unsexy but extremely effective kind of possession UNC repeated throughout the final 10 minutes:

Lots of simple dump-downs and drives to the tin with great spacing for UNC.

Yet, more than through tactics, the Tar Heels won because of the composure mentioned earlier. One very simple set of facts underscores the poise the No. 1 seed — the only one left in the Dance — used to its great benefit against the Fighting Irish.

With 15:05 left, Notre Dame — trailing 51-40 and seemingly sinking like a rock — uncorked a 12-0 run to grab a 52-51 lead with 12:45 to go. This wasn’t a slow run extended over several minutes. It was a mad dash of excellence crammed into 2:20. North Carolina had steadily extended its lead, but in a heartbeat, it had evaporated. Would another No. 1 seed from the ACC watch a double-digit lead vanish into the mists of humilation and rock-bottom emptiness on Sunday?

The Tar Heels tipped the cap to the Irish, admired that 12-0 run… and answered with a 12-0 run of their own.

With 8:55 left, Carolina led, 63-52. The Irish got as close as eight at one point in the next few minutes, but they never seriously threatened again. North Carolina missed multiple front ends of 1-and-1s when trying to nurse a late lead inside the two-minute mark, but it rebounded both misses to bleed the clock and finish off the sixth seed from South Bend.

The Final Four is its own story.

A preview of North Carolina’s semifinal with Syracuse, and Roy Williams’s reunion with Jim Boeheim in the NCAA tournament for the first time since the Syracuse-Kansas 2003 national championship game (you know, the one when Hakim Warrick blocked Michael Lee’s shot in the left corner), will have plenty of time to be unpacked. That will be the coaching story at the Final Four, while Buddy Hield of Oklahoma becomes the week’s centerpiece player.

This Sunday night — and the 24 hours after it — is not about next week in Houston, other than the fact that North Carolina will be there. No program, and no coach, felt the stress and strain of this season more acutely than the Tar Heels and Ol’ Roy. Like Villanova, they went seven years without a Final Four, but in Chapel Hill, that’s much more of a crisis than it ever will be in Philadelphia.

In 2012, North Carolina had a championship-caliber team, but star point guard Kendall Marshall got injured in the round of 32 against Creighton. UNC made its way into the Elite Eight, but fell to Bill Self and Kansas, Roy’s former employer. Had that 2012 season come together — at least with a Final Four, ideally with a title-game matchup against that great Anthony Davis team from Kentucky — you wouldn’t have heard nearly as much noise within the state of North Carolina about the state of Tar Heel basketball. However, that’s not how life happened.

Now, though, with his eighth Final Four safely tucked away — moving him in front of Tom Izzo and Rick Pitino for sole ownership of fourth place on the all-time list — Roy Williams stands below only three men in college basketball history: Coach K, John Wooden, and his mentor, Dean Smith. Those are the only three men to make at least 11 Final Fours.

This eighth one for Roy Williams might have been a long time coming, and the wait might have been entirely too long… but the aching, stressing, straining, eternally worrying coach doesn’t have to lament “the one that got away” this time.

North Carolina is the only 1 seed to book travel plans for the 2016 Final Four.