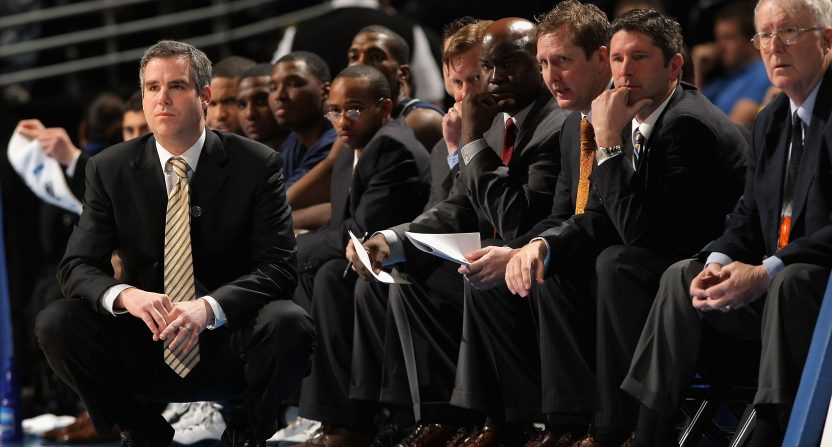 Oral Roberts used to be one of the nation’s better mid-major programs. Hired in 1999, a 28-year-old Scott Sutton led the Golden Eagles to 11 straight winning seasons before the program completely tanked the last two years, finishing 8-22 and dead last in the Summit League this season. So the school fired him, and you think you can understand why, right?

Now we have a better idea as to why the program has struggled recently, and it’s not Sutton’s fault.

Starting in 2013, new Oral Roberts president Billy Wilson told Sutton he could only sign players without tattoos, and new recruits would have to pass a “faith exam” as well, according to reports from the Tulsa World and local CBS affiliate KOTV.

Because apparently good people who are also good students wouldn’t be enough.

.@holcombOKBLITZ breaks down the #ORU firing of Scott Sutton. pic.twitter.com/Ep724jLwfL

In general, it’s become clear the administration at Oral Roberts treated Sutton like crap. According to the KOTV report, Wilson sought any reason to fire Sutton, which suggests his recruiting rules may have been more about creating a losing program to make Sutton look bad than to actually stick to the school’s evangelist tradition. The report also says Wilson told Sutton to fire his brother Sean Sutton, an assistant at Oral Roberts since 2011, not only to hire a new assistant, but to hire a new head-coach-in-waiting. In other words, Wilson wanted Sutton to hire his eventual replacement in place of his brother, who was also the top assistant on his staff.

Even colder, Sutton found out about his firing through social media while watching his daughter’s tennis match. While Sutton remained diplomatic, some former players tweeted about how disrespectful that was.

Here’s former players Warren Niles and Dominique Morrison, who starred at Oral Roberts shortly prior to Wilson’s tenure as president:

Man I'm disgusted with that news! It's bullshit! Flat out

After that Man turned down big offers to be loyal to the University. Scott Sutton is ORU Basketball. Smh

Fuck #ORU if what I'm reading is true.

Coach Sutton dedicated YEARS to the program!!!! No way that type of news, makes twitter before telling him

Aye Billy Wilson I just have one question. You told twitter first? Coach Sutton didn't deserve better. No man should find out that way

It’s no coincidence that Sutton’s teams hit a bit drop-off once Wilson became president. The Golden Eagles went 58-70 since 2013 after winning 20-plus games in seven of the previous nine years.

If those evangelist values are really the main values at your school, go ahead and stick with them. But don’t expect a winning product on the court if those values are the priority. And don’t fire a coach with a winning track record simply for doing as he was told.

If there’s any sense of justice in the world, Sutton will get looks from other mid-major programs who recognize how strong Oral Roberts’ program was when Sutton had an administration that wasn’t actively working against him. Although the Golden Eagles never won an NCAA Tournament game under Sutton, they made the Big Dance three straight times in the mid-2000s along with two NIT appearances. They won five Summit League titles in an eight-year span.

Now Oral Roberts begins a head coaching search for the first time since this century. They may have had to do it before, but despite his success Sutton stayed loyal to the school when other schools put out feelers.

The job may attract some hungry, young assistants considering the program has had some past success. But who would really want to work for a president with Wilson’s history?

As it already stands, morale on campus has dipped, according to Ben Johnson of the Tulsa World. On top of that, this week’s news could have a larger negative impact on the university with advertisers wavering on their commitments.

More from non-athletic ORU source: "A domino effect is taking place." Also said advertisers could be wavering on their commitments. #orumbb

If Oral Roberts fans thought an 8-22 season was bad, that may just have been the beginning.