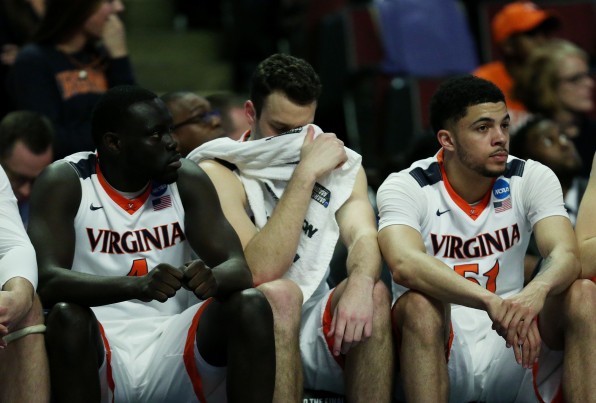 He collapsed on the sideline during his team’s first-round game against Hampton, but he turned out to be just fine.

The other Tony Bennett — more precisely, the original Tony Bennett — felt the need to make sure he was not in distress. He included a friendly note to his less famous namesake:

I wanted to let all my fans know that Im ok. Glad to hear UVA coach Tony Bennett is fine after his fall. Congrats @UVAMensHoops on the win!

He might make his first Final Four one day, but Bennett had everything set up on a silver platter on Sunday evening in Chicago. The Midwest Regional final was everything he could have hoped for.

A team he had beaten in the regular season? Check.

A less explosive team than Gonzaga, which the Syracuse Orange ousted in a Vegas-line upset? Check.

Virginia is patient and deliberate. Moreover, the first few times Syracuse coach Jim Boeheim threw a press at the Cavaliers, they raced downcourt and scored. They demonstrated that they knew what to do. It’s not as though the press flummoxed them at the start. They got a few baskets by shredding the pressure in textbook fashion.

Syracuse’s identity over the weekend in Chicago was all about finishing the jobs opponents didn’t have the composure to complete.

Virginia’s identity? Well, it vanished into the rafters of the United Center… and who knows when it will be rediscovered? 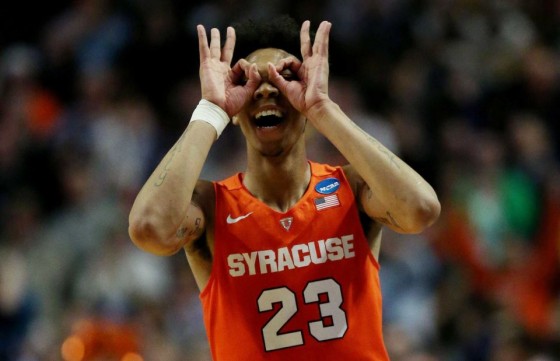 Yes, we’re here on yet another NCAA tournament Sunday, in shock after an epic collapse. Last Sunday, it was Northern Iowa against Texas A&M, a fast-motion crash in a series of quick domino-like explosions. That escape from the dead by A&M took 34 seconds.

This meltdown by Virginia unfolded in a slow-motion manner, over the final 7.5 minutes of regulation.

The sad Virginia fan memes were out in force:

Friday, it was noted at The Student Section that Syracuse’s defense finished its two halves against Gonzaga as well as it possibly could. The Orange allowed four points to Gonzaga in the last six minutes of the first half, three in the final six minutes of regulation. Gonzaga has two world-class players in Kyle Wiltjer and Domantas Sabonis. That’s extremely hard to do, and while the Zags certainly lost their poise, Syracuse’s sustained energy — made possible by Boeheim’s 2-3 zone, which conserves legs over the course of 40 minutes — dominated those final six minutes in each half.

The Orange lived another day.

Yes, Virginia was supposed to be a different beast, with Malcolm Brogdon and London Perrantes anchoring a backcourt far stronger than Gonzaga’s. Brogdon and North Carolina’s Brice Johnson have been the two best players in the ACC all season. This was exactly the kind of situation Brogdon did not figure to mismanage, or observe while teammates faltered.

Yet, Brogdon never came to his team’s rescue, and with Perrantes no longer hitting the threes that fell earlier in the game, Virginia’s offense ran into a brick wall — or rather, an Orange wall.

These two sequences below repeated themselves again and again in the final eight minutes:

Virginia made an out-of-control play (ironically, akin to what Syracuse had been doing for the first 30 minutes). Syracuse cleaned up on the glass or got to a 50-50 ball first. At the other end, the Orange created (or found) better spacing on defense as Virginia — shellshocked and paralyzed — failed to get to spots and protect the defensive boards.

The Orange juice flowed freely. Virginia was frozen and could not concentrate. 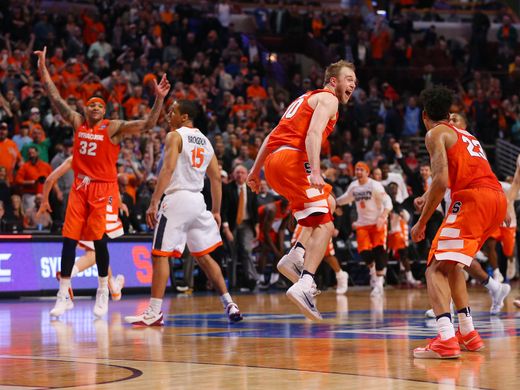 We wondered when a crazy and parity-laden college basketball season would give us something truly absurd in the NCAA tournament.

Syracuse — bubble team and controversial at-large selection — has given us that plot twist by going to Jim Boeheim’s fifth Final Four, three of which have been achieved as a 4 seed or lower.

Northern Iowa-Texas A&M was 34 seconds of panic. Syracuse’s run to Houston — aided by Michigan State’s loss to Middle Tennessee and then powered by two against-the-odds comebacks in Chicago, one of them against a 1 seed which controlled the action for 30 minutes — is beyond comprehension.

Jim Boeheim holding court at the Final Four while Tony Bennett watches from a seat in the stands?

It’s not the reality we were expecting. It’s not a reality which will make another lick of sense a week, a month, or five years from now.

You can say whatever you want about Boeheim, his combative ways, and the kind of program he runs, and how much he does or doesn’t deserve.